Getting Ready to Ho Ho Ho! 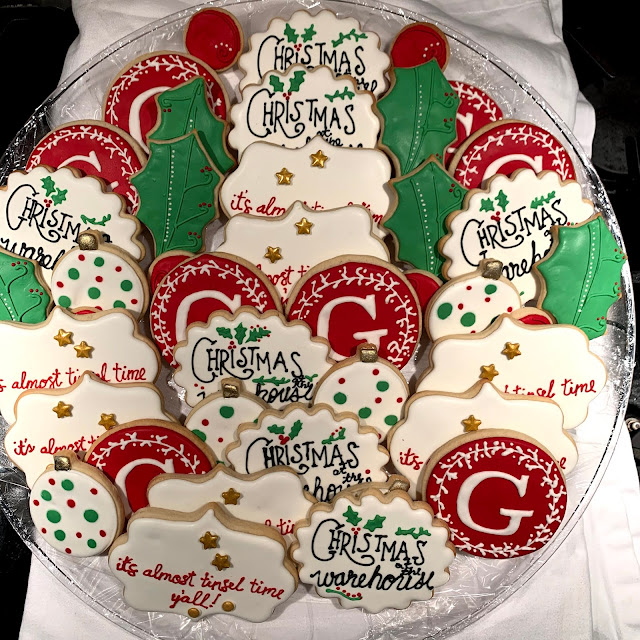 I admit.  I usually put up my tree on Halloween.  Yep.  We are lucky if we get a dozen trick or treaters, and I am totally itching to move on to the festive holidays.  I don't decorate the tree for a few weeks, but I love sitting in the light of a Christmas tree.  Think of it as a fancy floor lamp if you must.  There is no getting around the Christmas cookies however.  I get orders earlier and earlier every year.  This year, I also decided to only take 2 custom orders in December, and everything else is Christmas themed.  It will totally keep my sanity in check if I'm not making baby rattles and onesies in baby blue come December 15th.  Any other month is fine.  And I have a December baby, so I know all too well that they can get the shaft on a lot of things because of the jolly fat man!

This platter was made for a friend helping out at a giant Christmas sale in Arkansas.  She is related to the man who owns the business and she goes up every year to help them.  I used the logos and sayings from the company website and made a cheery Christmas platter that she picked up on Halloween!  Which was fine, because you know, my tree was going up! 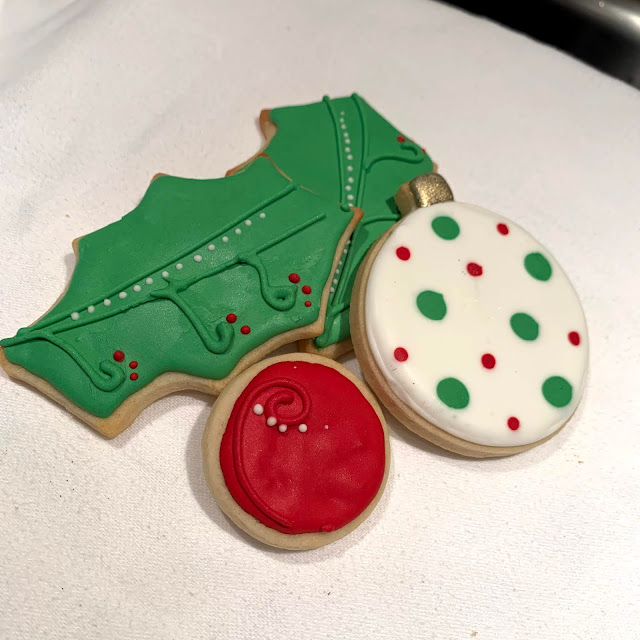 So the company is called Guess and Company in Des Arc, Arkansas.  I followed them on Facebook so I could get a feel of what she wanted to bring.  Well every day Paul Guess is posting these videos in the 60,000 sq ft warehouse talking about this enormous sale that lasts into December.  I wanted to go! My original plan was a road trip for opening day....I love an event!!!  Then I saw a video about how you can pull a ticket at midnight the night before it opens, to GET IN LINE the next day!  Holy Moly....this was serious. They only let 350 in at a time, and that happens fast on opening day! My friend suggested opening day was not the best idea.  So I regrouped and let opening weekend pass.  I rounded up a couple of girlfriends and went Friday of weekend 2.

The drive to Des Arc from Memphis is 100 miles, on the nose.  The worst part of the drive honestly, is driving through Memphis.  So we decided to leave after rush hour and maybe we'd miss the first wave of crazy shoppers,  You know who you are! We arrived in this tiny little town on the river at about 10:30.  Parking was not a problem, and we didn't need a number to get in.  The place is insane!!!  There are beautifully decorated trees everywhere, and nestled in the vicinity of said trees are the picks, garland, ornaments and whatever else was used to make that tree.  It was sensory overload in the very best way.  We started first as a simple wander around and then developed a strategy after we felt like we had a feel for where everything was.

I knew that the pastel colored area was not of interest, neither was the rustic woodland.  I focused in on the more traditional red accented area, the snowmen trees, and the gold trees and found the mother load for my house.


My friend Debbie hit pay dirt in the woodland area and even paid a worker to climb a ladder and strip a tree of a particular garland she wanted.  She bought every last one.  When our baskets were full, we got another and filled that. They even have a corral where you can leave your full basket while you continue to shop! Monica filled hers with gold everything!  She was changing up her Christmas look and gold it was!  We finally made our way to the line for checkout.  WHOA!!!

The line.  It snaked to the back of the store and back around to the front.  We heard people complaining they'd been in line for an hour, we saw deserted baskets everywhere.  People!!!!  This is the caveat of a great adventure...so we got in line and honestly, time flew.  You walk the perimeter of the warehouse and the three of us would take turns wandering and adding and chatting and looking at what others had and were doing. And maybe making some last minute buying decisions!

The checkout line was fast and efficient and I seriously had a sad little feeling when I left, like maybe I forgot something!  I did leave without a significant amount of money.  The three of us spent just over $1500. Really, it's not bad!  I won't disclose who spent what since we are all probably fibbing about exactly how much we bought!  We stopped at the Dairy Bar for a super nutritious lunch, that was delicious...and crossed over that picturesque river on our way out of town.  It was so worth the trip.  No, not cheap.  But not ridiculous retail either.  There are sooooo many things I have never seen, and I was so inspired.  You need to go with a plan, a budget (well, that's probably not the easiest part) and some friends because we had a blast. Also don't for one minute think you can do this in a car.  We filled, and I mean filled my SUV.  It was covered in glitter!!!  What a way to usher in the holidays! 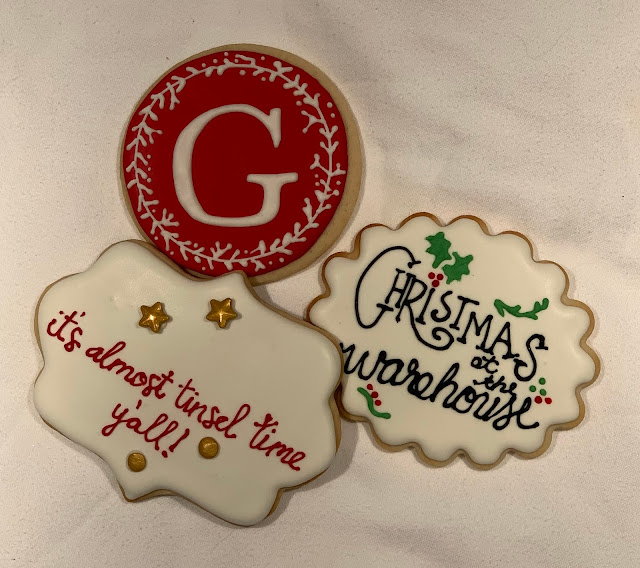 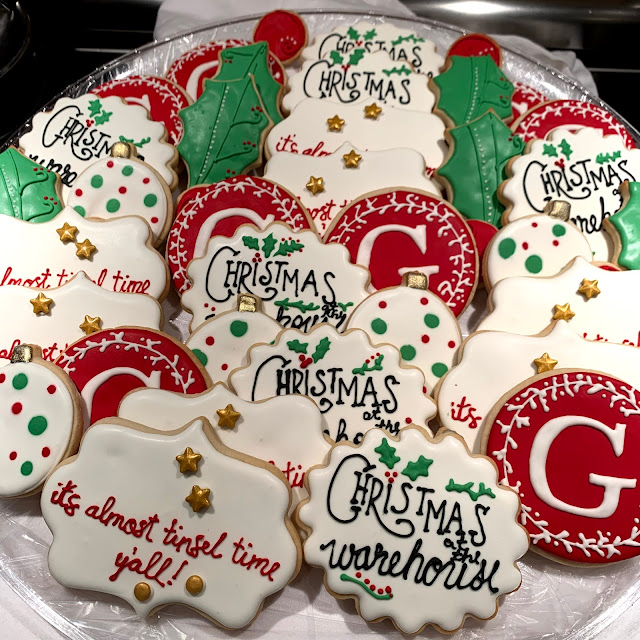 Email ThisBlogThis!Share to TwitterShare to FacebookShare to Pinterest
Labels: Christmas Cookies, Christmas in the Warehouse, Guess and Company