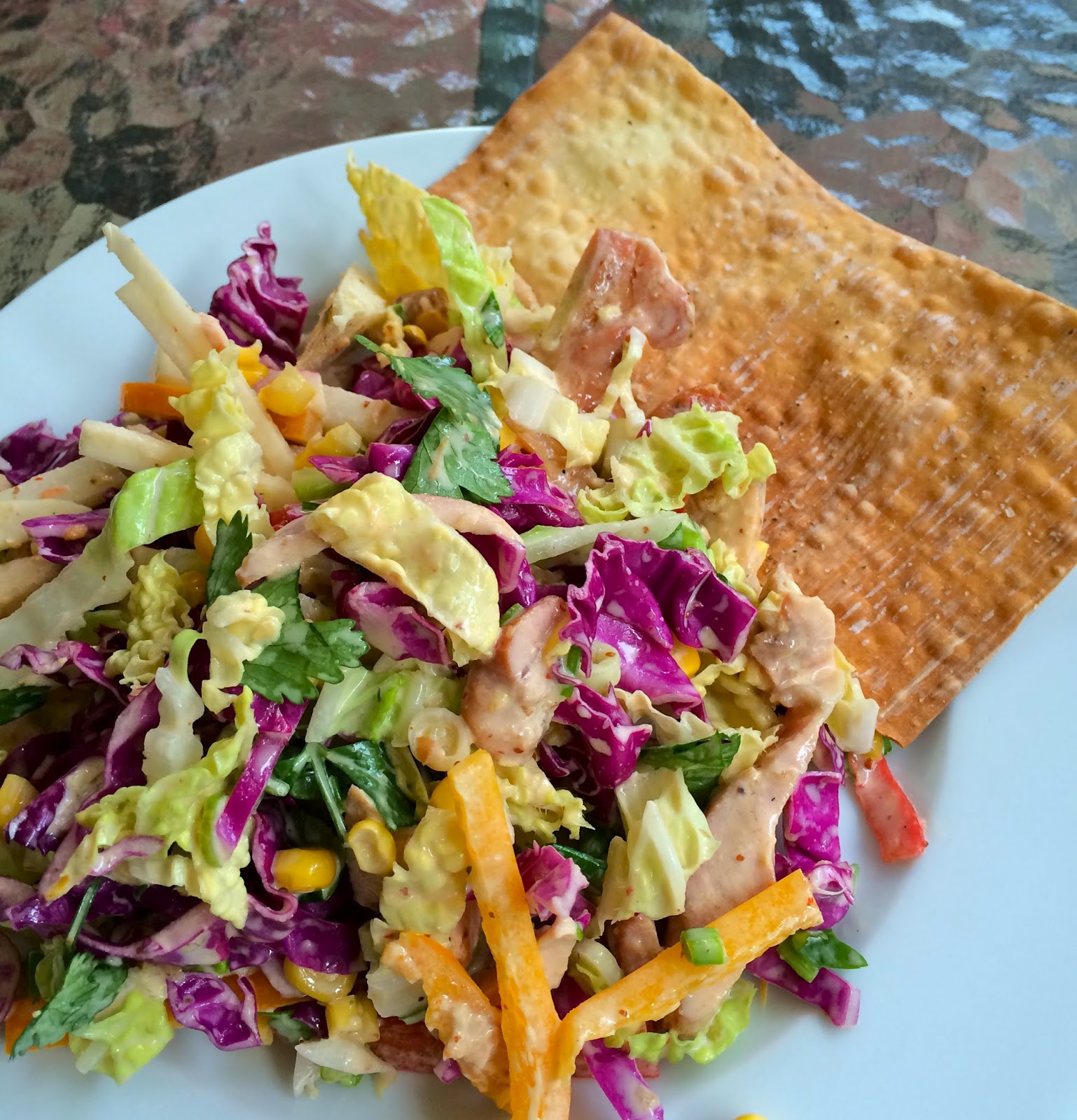 Grilling season....it really is a year 'round thing here in the South, but in the summer, you truly feel obligated.  A few weeks back I asked Mr. Preppy to grab some chlorine for the pool when he was out, and he came home with a Green Egg.  The ultimate man grill.  So I have been researching the cooking methods and recipes, and I have to say, I love this thing!  When OXO reached out about a summer promo, and one was What a Grill Wants, I knew this would be the perfect opportunity to whip up something yummy on my Big Green Egg.

OXO sent me a nice package with 5 items, and I was beyond excited.  I have been selling and using their products for years, but I didn't own any of these.  Tongs, yes.  But not these extra long tongs that are perfect for a hot grill.  Here's how I incorporated these tools and this delicious recipe. 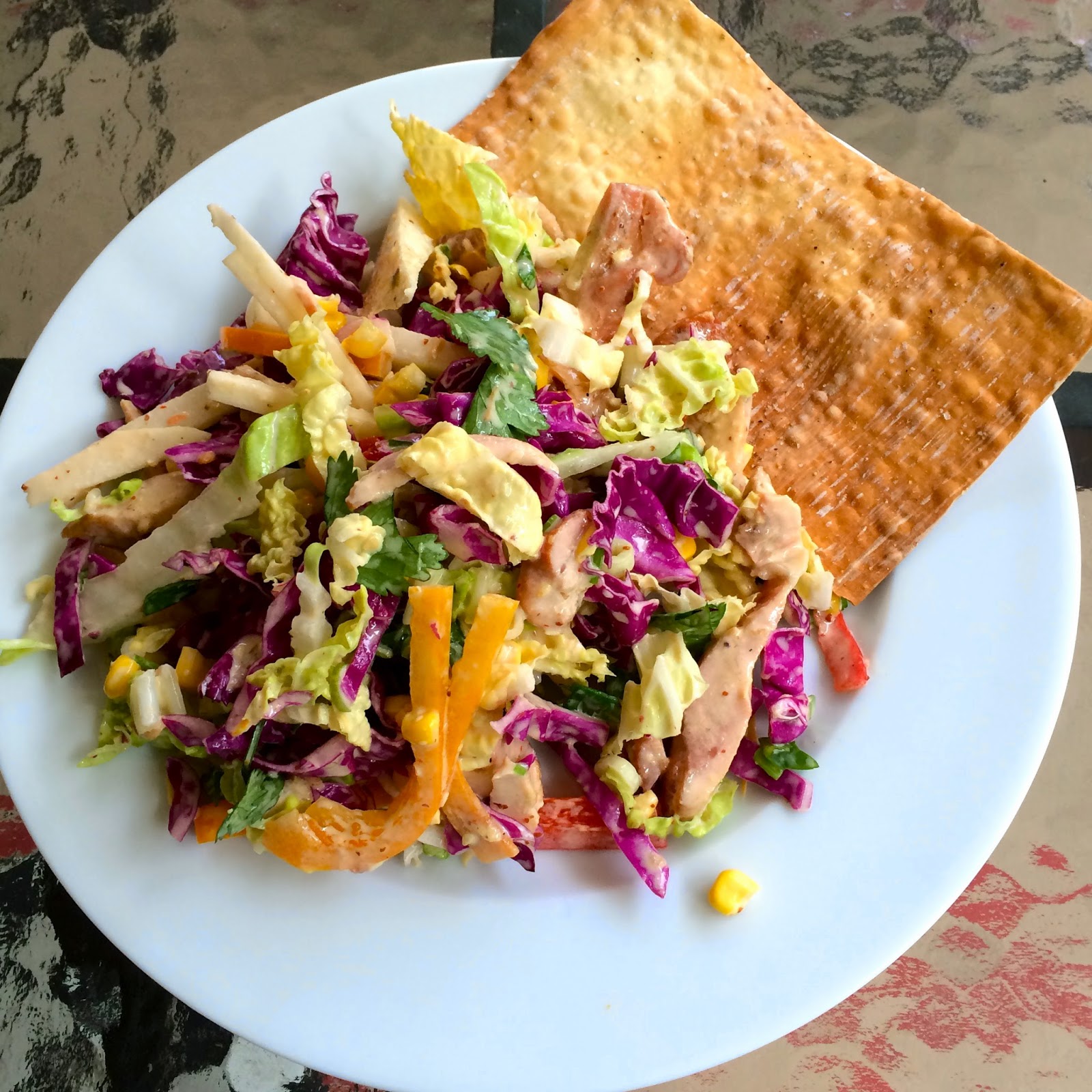 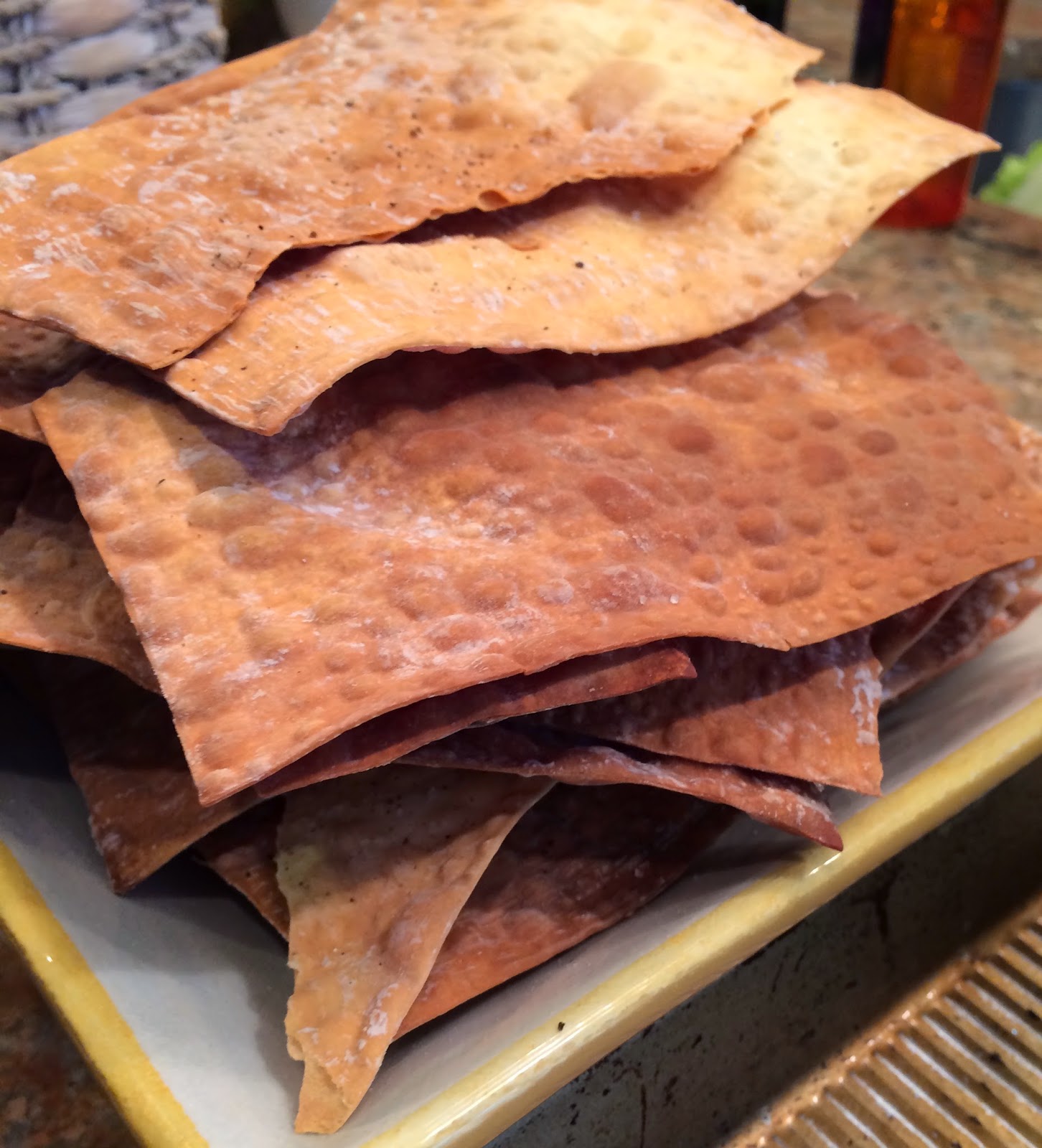 Wonton Wrappers (I made 12 but there are a lot in a package.  Cook them up, they are delicious!)
Coconut Oil
Salt and Pepper

Preheat oven to 350 ̊F.  Brush the wontons using your OXO silicone basting brush with a little coconut oil and salt and pepper to taste.  (use z'tar and make chips for hummus....that's another blog).  Bake for about 6 minutes, but keep an eye on them, they crisp up in a hurry.  Cool and set aside. 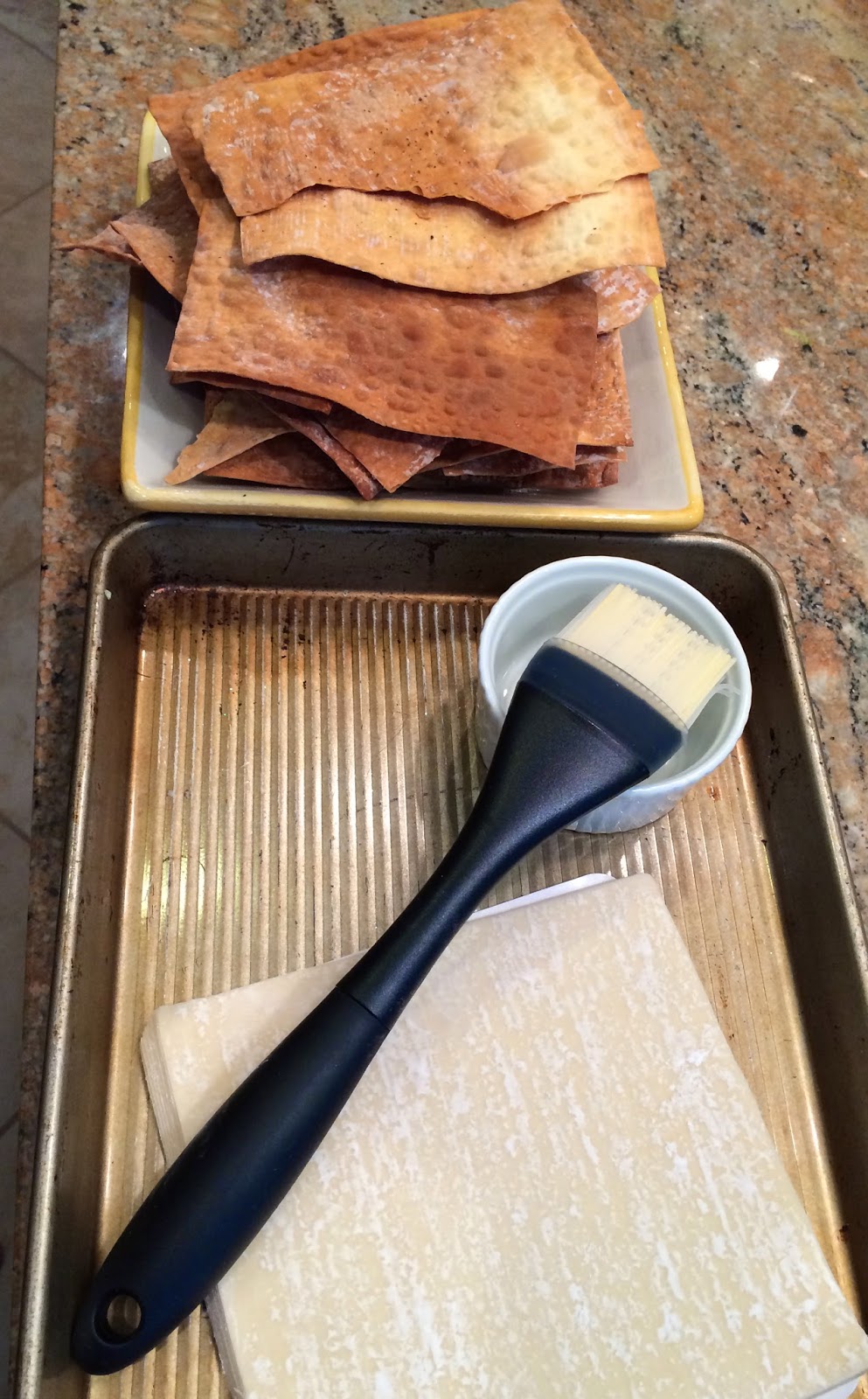 TOOL TIP: The silicone brush is a must have in any kitchen.  I used boar bristle brushes for years, which eventually shed little hairs.  Silicone is heat resistant to 600˚, it doesn't trap odors, and you can toss it in the dishwasher for easy cleanup.  I used it to brush a glaze on the chicken while grilling as well.

Mix all ingredients in a jar and emulsify well.  I was given a salad dressing jar by OXO, but it is a little small.  I usually double my dressing recipes, and I usually use a Mason Jar.  I can see that this little jar will come in handy, especially since it is leakproof, but not this time.  Set the dressing aside. 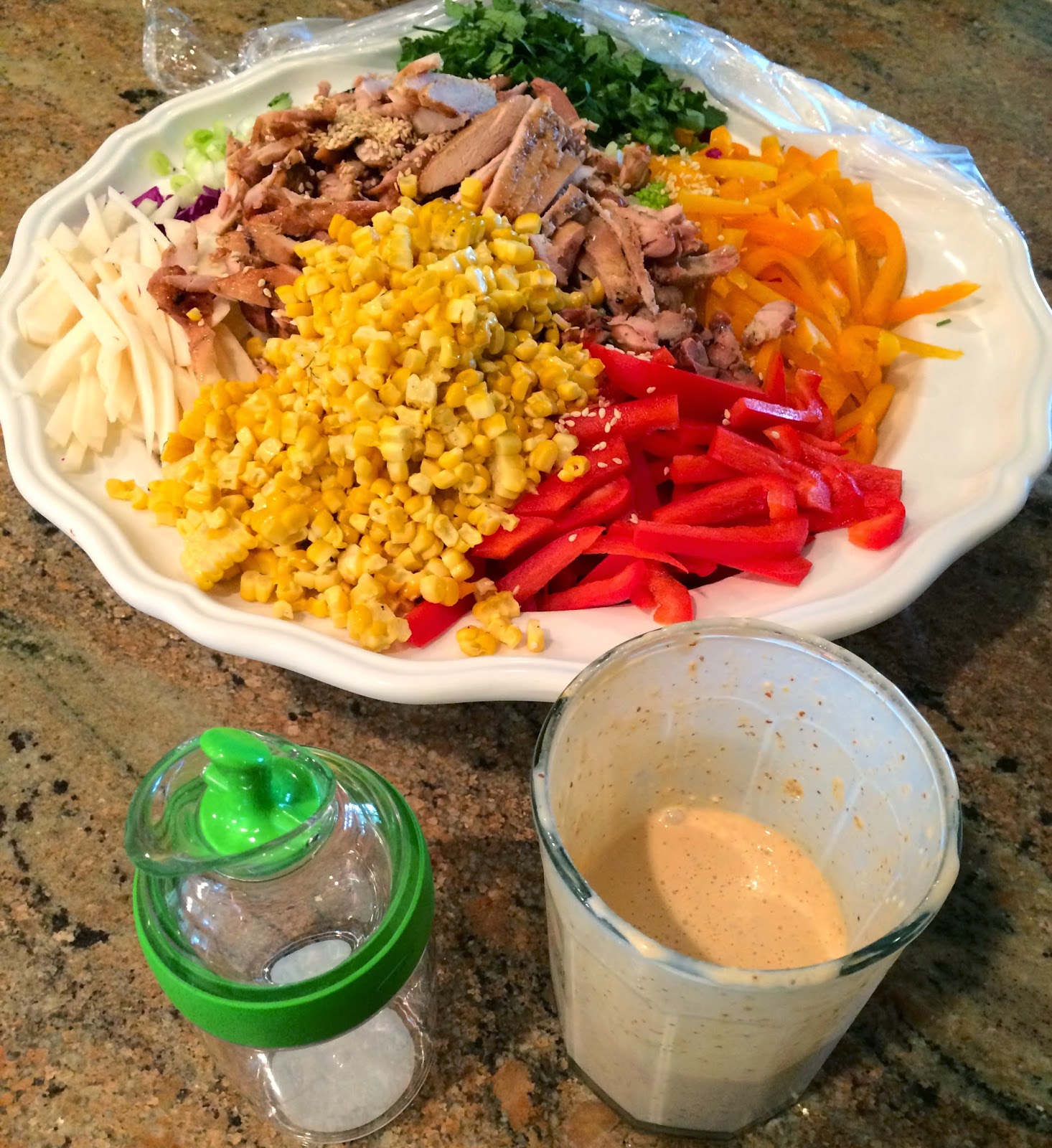 
On a flat surface, I tenderized the chicken thighs with the OXO tenderizer.  Thighs aren't in need of actual tenderizing, but it acted almost like making them into paillards.  They flattened out, and I knew they would cook fast and even on the grill. Plus the little holes had to drink up the glaze.


TOOL TIP: I didn't own a meat tenderizer, but I will love using this one.  It has a lock feature, so no one will inadvertently stab themselves.  It comes apart for cleaning, and it did a great job on these thighs. 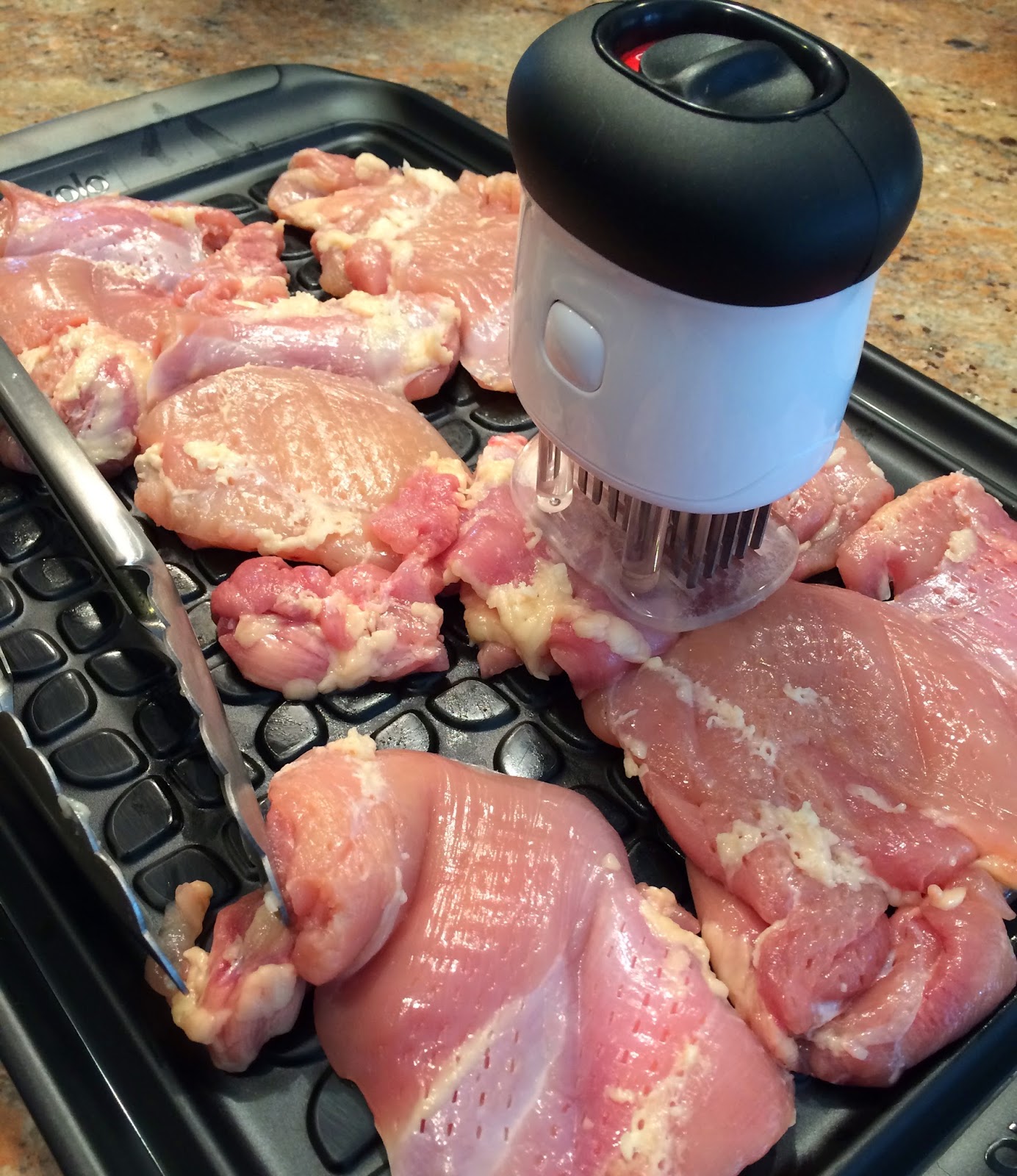 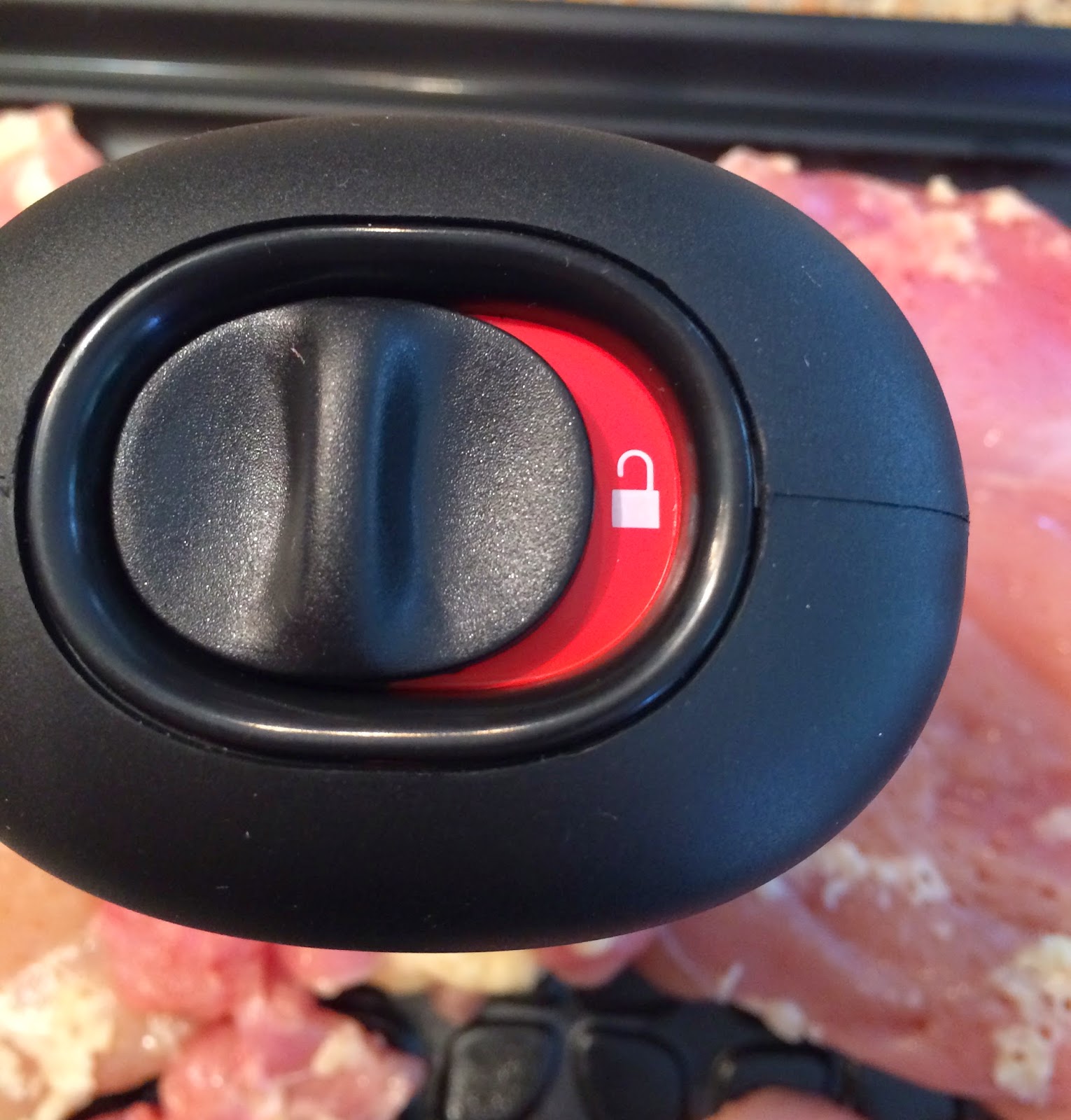 I lit my charcoal and let it turn white, and using my silicone brush, I brushed a little Asian glaze I had leftover in the fridge.  A sugar based glaze will make a nice char on the meat.  I used the tongs on the grill and they kept me a nice distance from the heat.  The chicken took about 5 minutes total, and the corn I just rolled every few minutes.  You can see the kernels turn a deep golden color as the heat does their thing.  The char marks are a bonus, and the smoky flavor of the corn is awesome!  I promise it cannot be achieved on a gas grill.  What have I been missing!?  Let the meat and the corn cool. 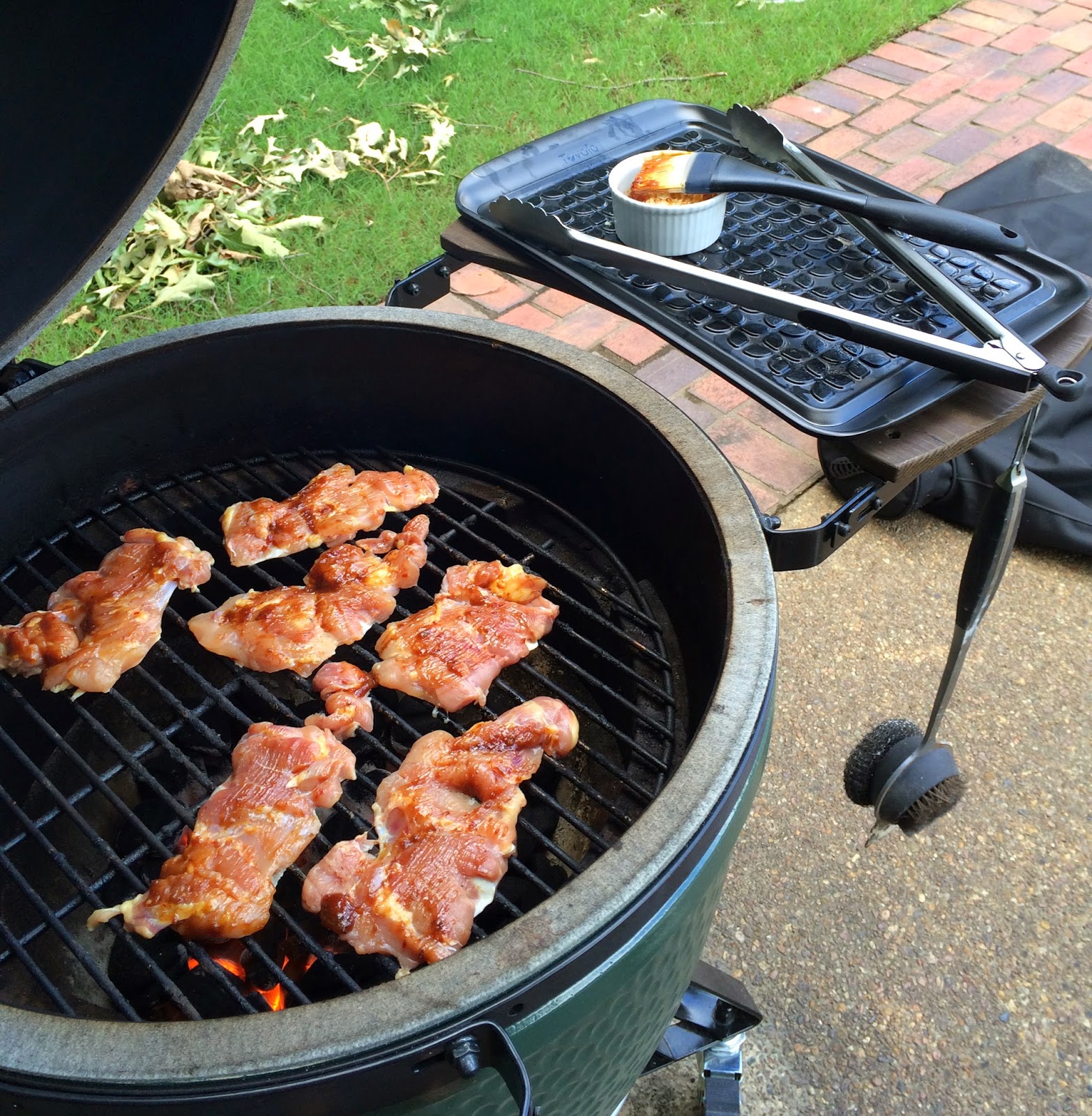 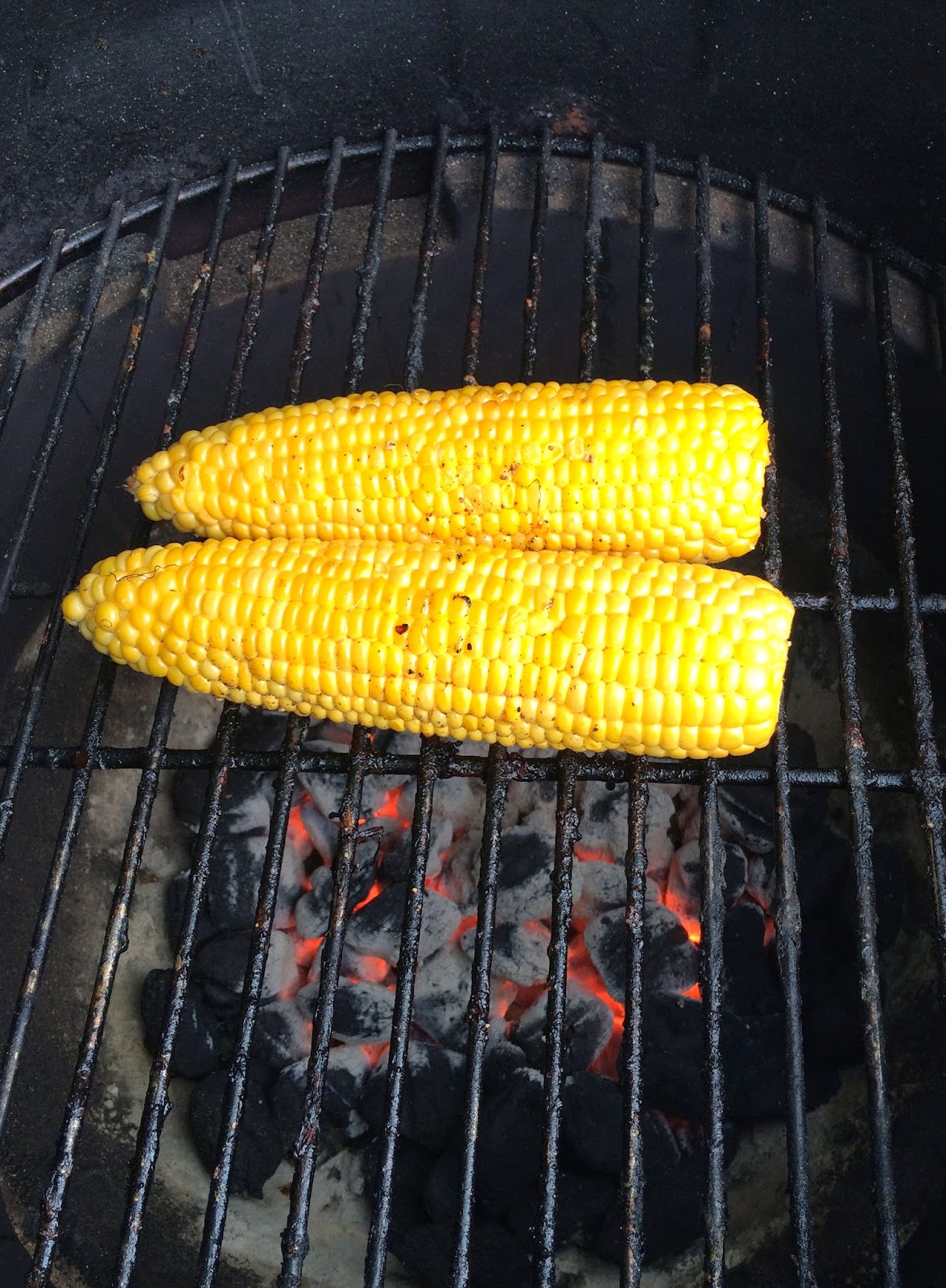 TOOL TIP: Tongs. You have to try them and you'll be sold.  I already own a few pairs of the OXO tongs in short version, about 9".  The tongs they sent me are 16'' and lock for easy storage.  They are so long, and great for grilling! 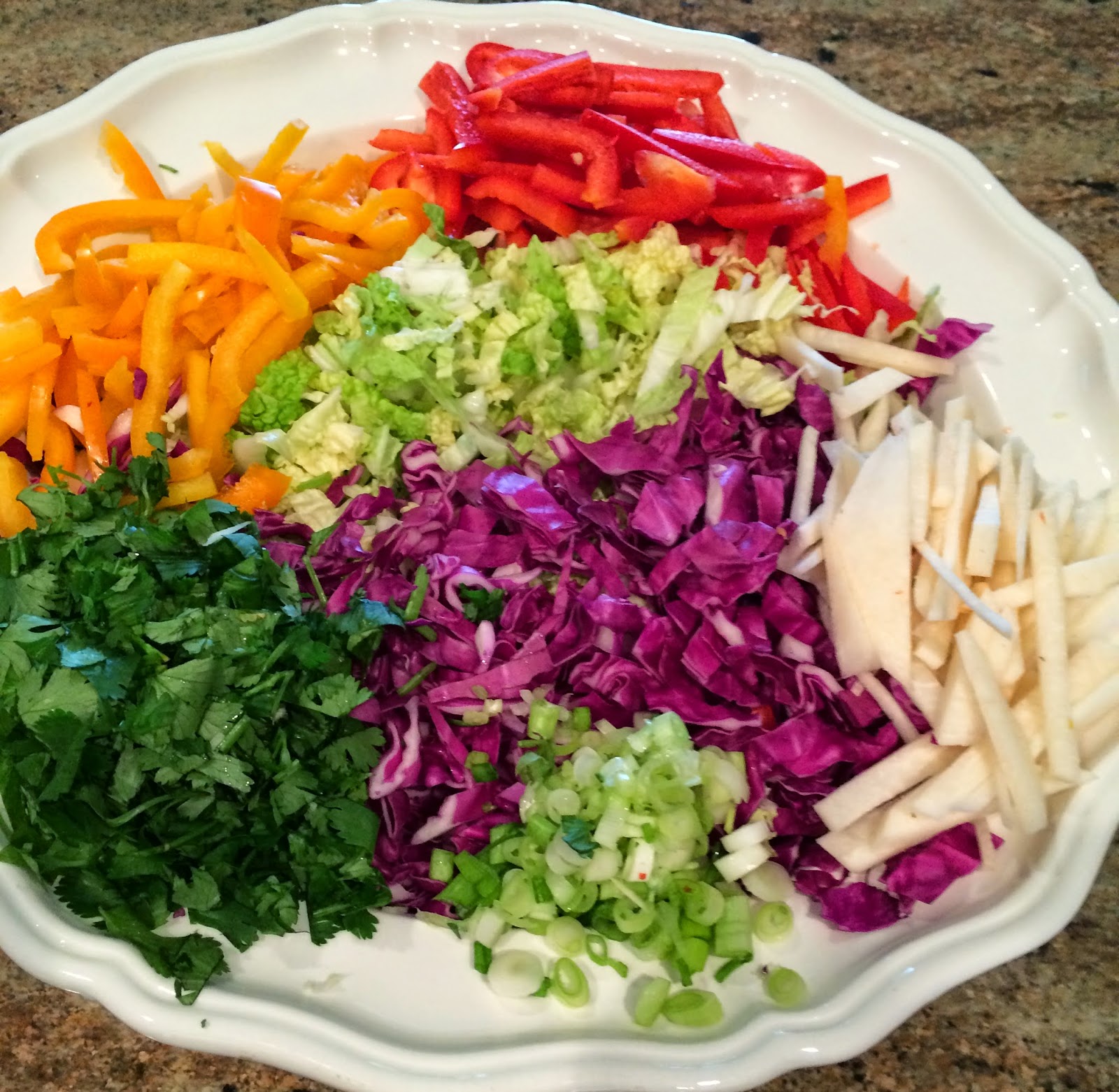 Place the other ingredients into a large bowl with room to toss.  You can add more cabbage as you need.  Slice the thighs thin and add to the bowl.  Using the corn stripper on a cutting board, slice the kernels off with the stripper.  Add to the salad.

TOOL TIP: The corn stripper is not new to me, but my version doesn't have a catcher for the kernels, and what a difference that makes.  The mess in minimized, and the tool strips all the way to the cob.  This one is a keeper.  I love a fresh corn salad, and this will make the process a breeze. 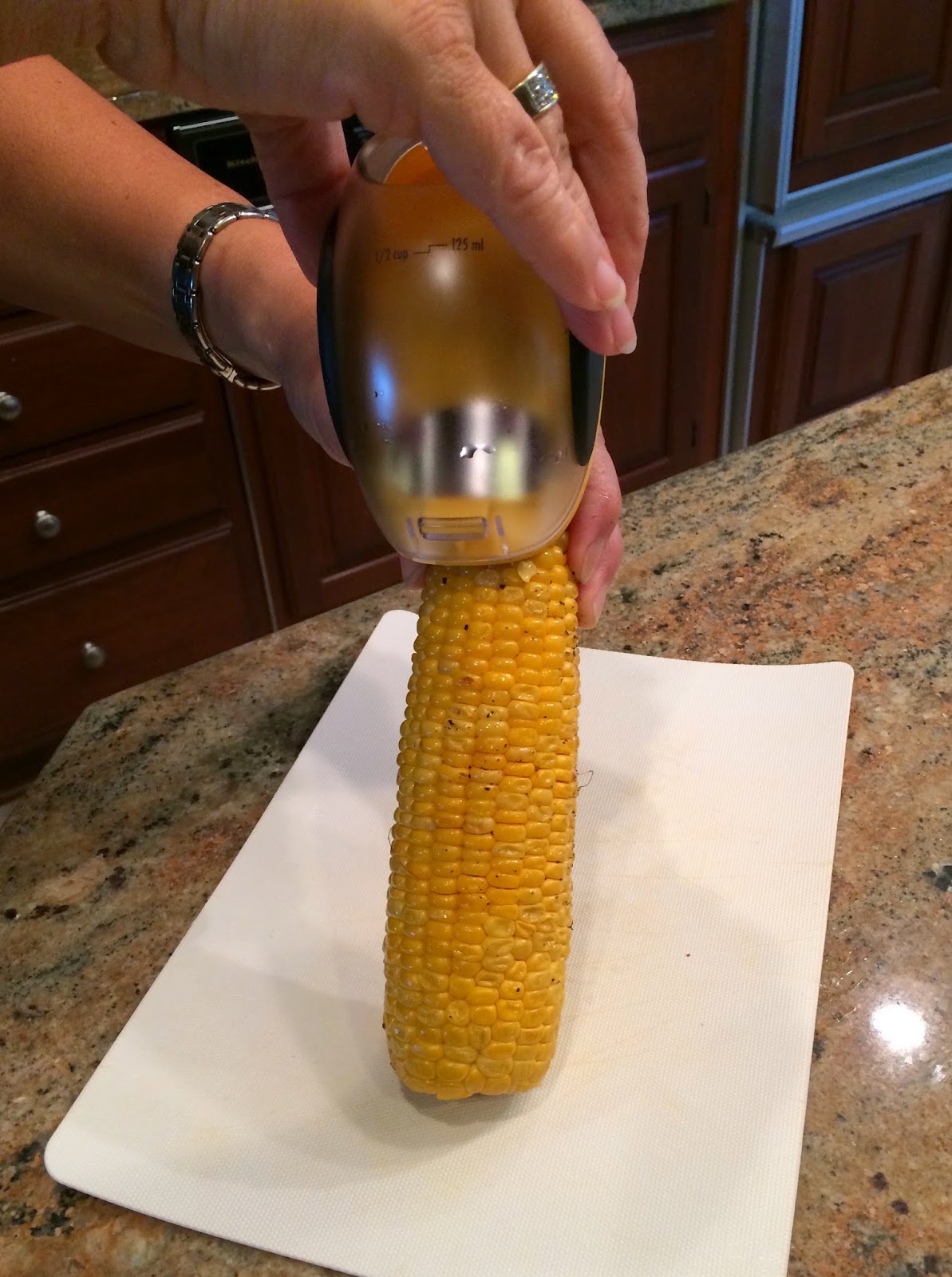 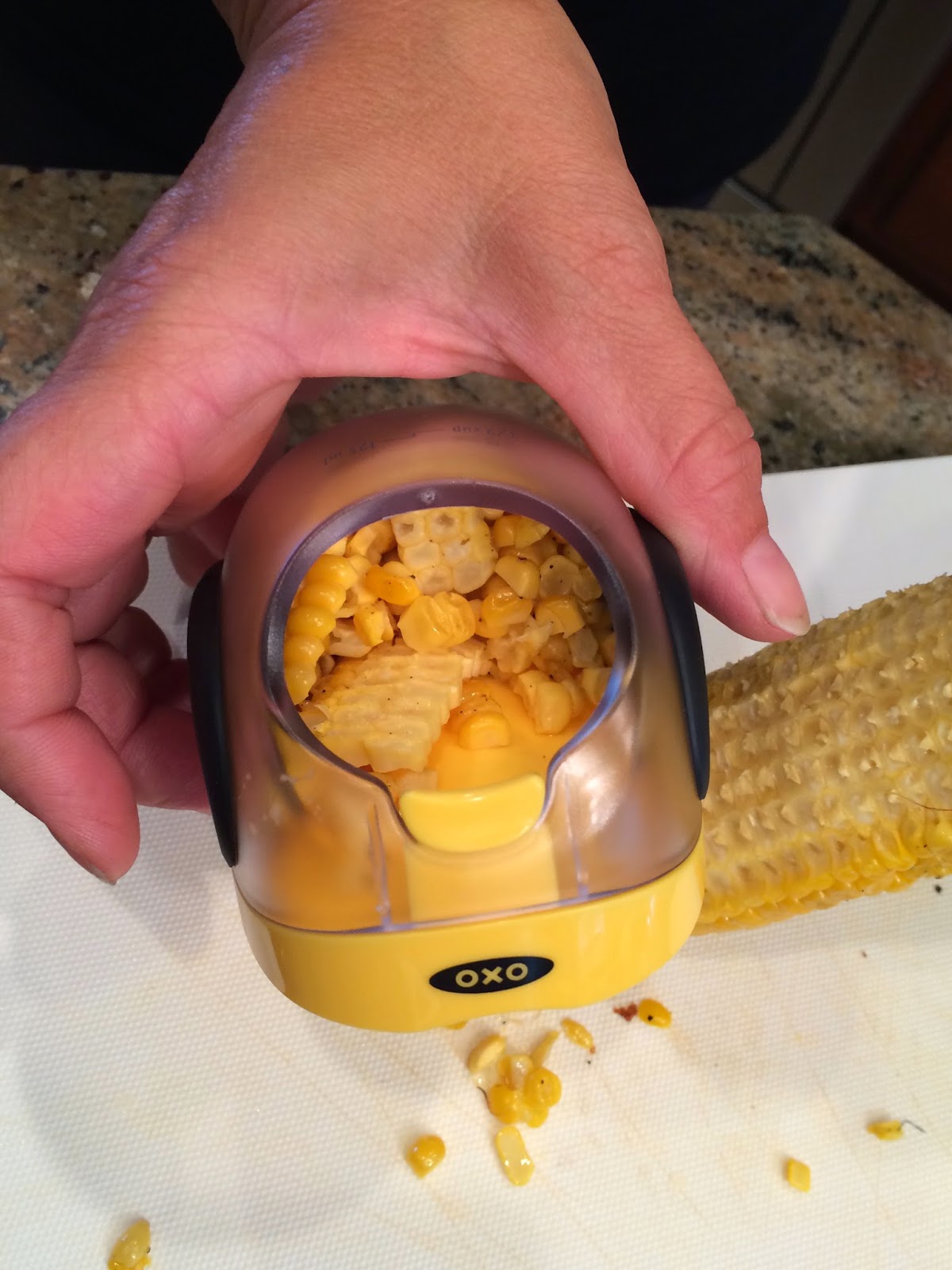 About an half hour prior to serving, toss the slaw with the dressing.  I serve the croutons in a basket along side the salad.  I like to use them as a scoop and eat the slaw right off that crispy wonton.

So, what are you waiting for?  Get out there and grill!