Sometimes I surprise myself.  Like today, I was scrolling through my recipe index and was kind of shocked by what wasn't there.  Recipes that I love, that haven't made it up on the blog.  Sometimes it's just that I do it by rote, and then afterwards think, dang, I should have shot a photo or 2!  Plus, I am not a big garnish type, or precise at my outcome, so many aren't worthy of a photo or post.  But I will get on these favorite recipes with camera in hand.  Today, meringue cookies.  And a note here, do NOT, under any circumstance, make these on a rainy day!  Disastrous! 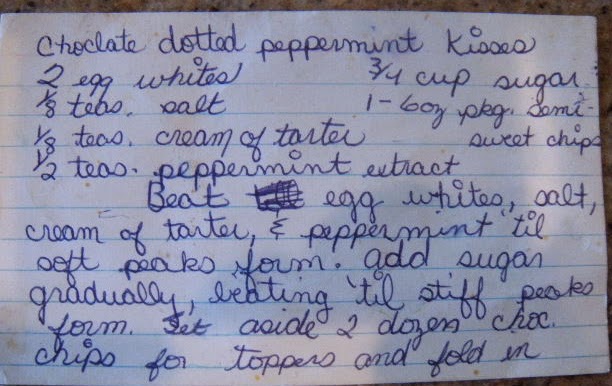 The original recipe is handwritten in my grade school handwriting, with big open dots on the I.  What you can't see on this card, is to fold in the chips and drop onto parchment paper lined cookie sheets.  I bake them for about an hour at 250º.  I let them cool in a turned off oven, and they need to be stored airtight!

I had these cookies at my childhood friend's home.  She lived on a farm, and I am so certain I have written this all before, but I can't find it!  She lived with her parents, and her grandparents lived in a house on the other side of the garden.  The men all farmed and in the middle of the day would come in for dinner.  They had a huge table in their kitchen and I loved spending the night there and being part of this enormous family.  We would get to feed the calves with a giant baby bottle, and to this day I can conjure up the smell of the powdered calf formula we gave them.  We would go to the hayloft and jump on bales of hay, and the old chicken house was a place to play.  Her family would host fall bonfires and hayrides for our class.  True American childhood right there. 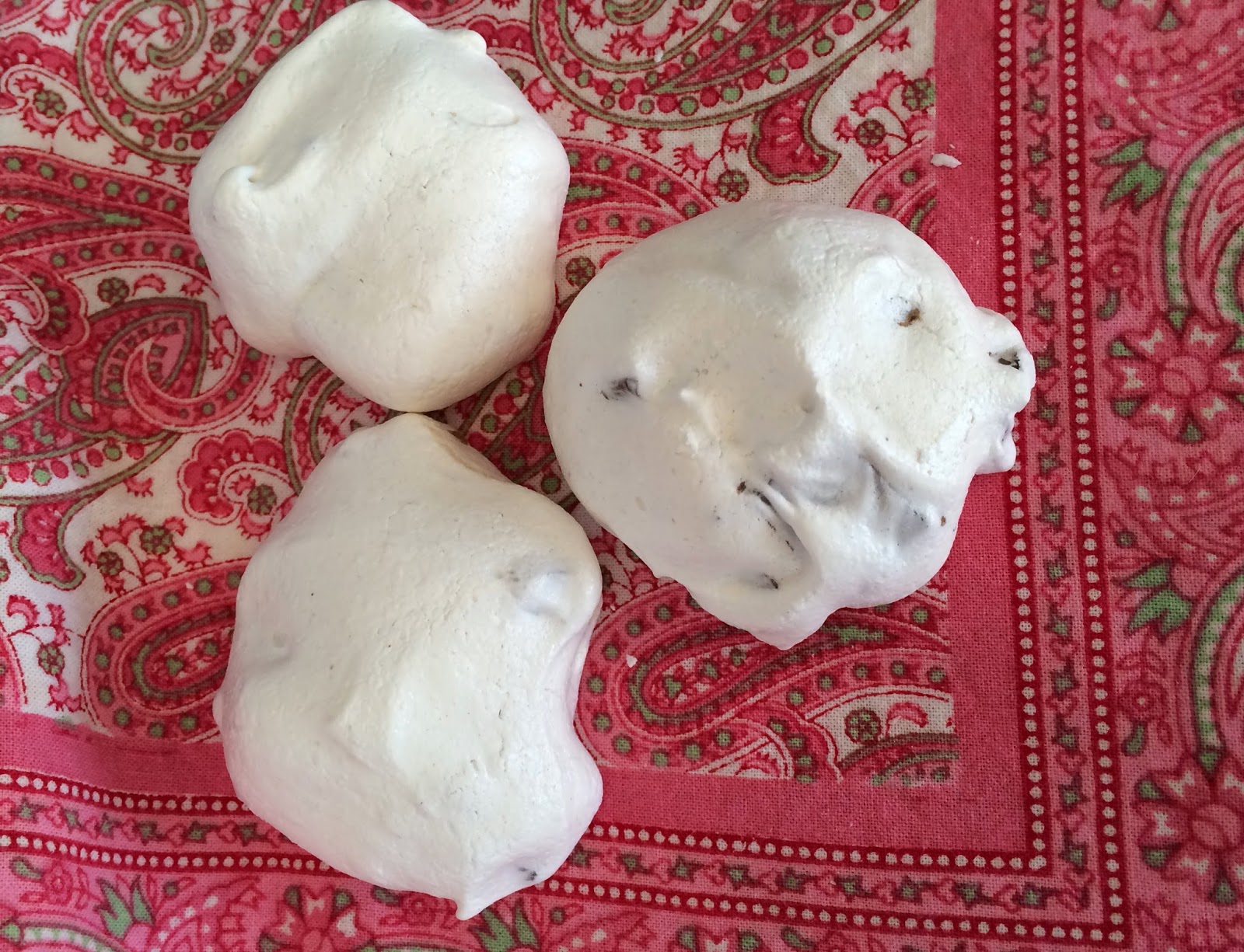 I have posted before my love of meringue.  Most precisely, raw meringue.  I can eat it right out of the bowl.  Of course I love to baked cookies as well.  Thankfully no one in my family is as enamored with these as I am, so I make them sort of big, and enjoy each and every one.  I am not much of a sharer with Chocolate Dotted Peppermint Kisses! 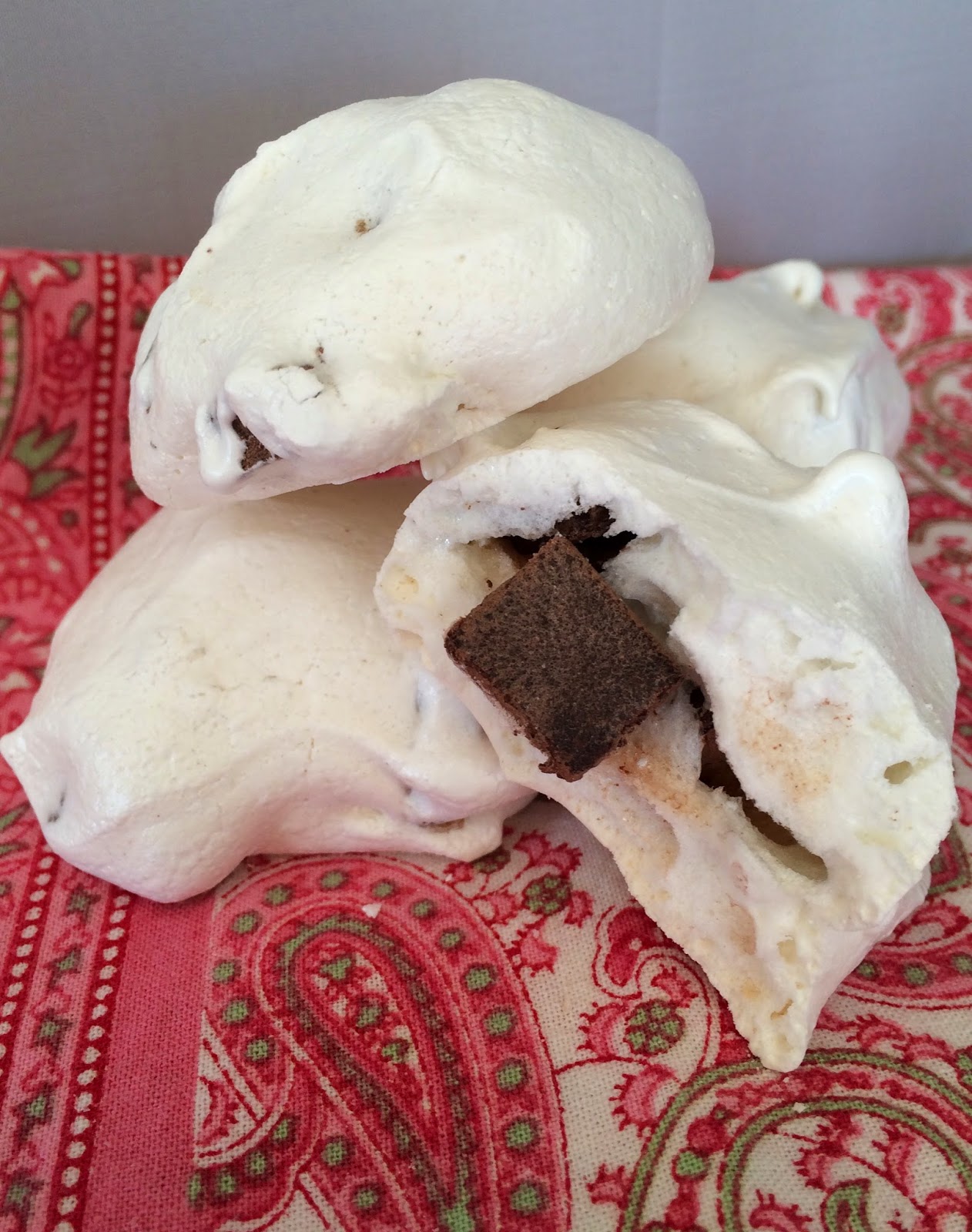 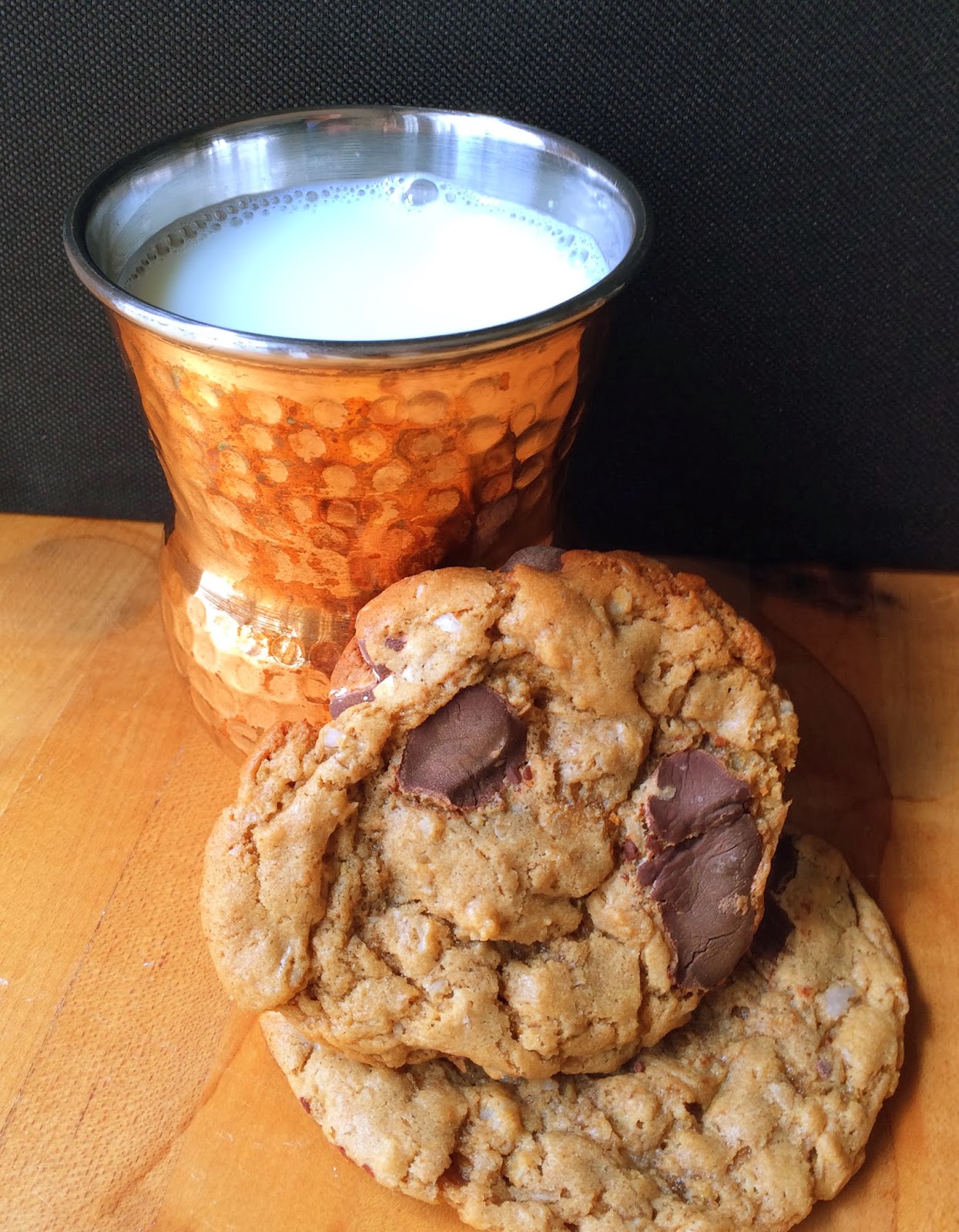 Way back when NOBODY but my mom was reading my blog, I was baking away making flourless (gluten free) cookies.  For no reason other than I love them!  I decided to revisit and revamp one of those old recipes.  My flourless peanut butter cookies originally called for kisses,  and I unsuccessfully used Mexican chocolate.  Today I am using dark chocolate chips.  Kisses make my teeth ache.  I also decided to amp up the fiber in these guys with some old fashioned oats. 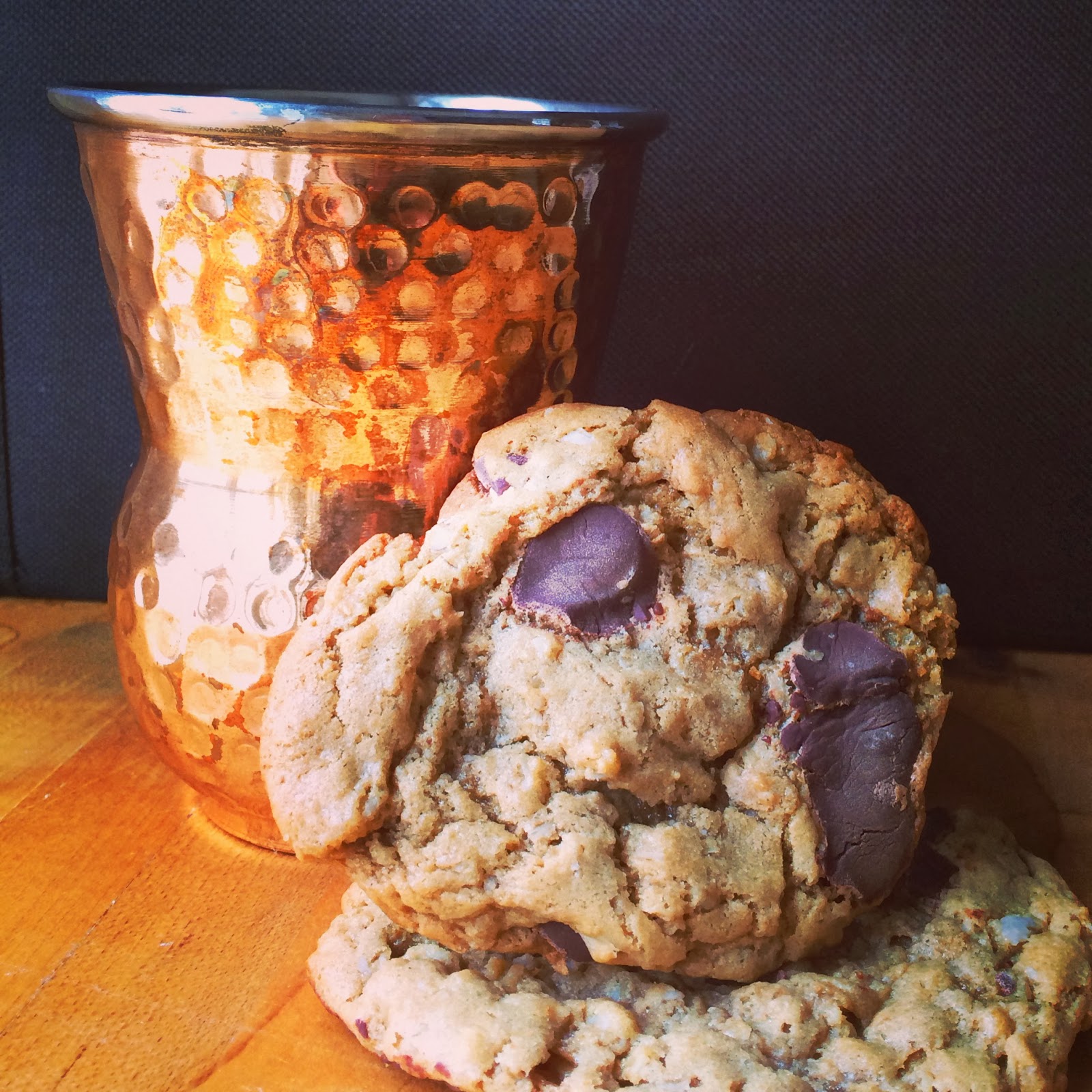 I made a few changes worth noting. I added an extra egg.   Also, I used both baking powder and soda.  I needed leavening here, and after consulting In the Sweet Kitchen by Regan Daley, I decided this was the way to go.  Also, after teaching a gluten free baking class, I learned a lot from the info  I used.  If you are truly going for a GF lifestyle, you become an ardent label reader.  Gluten can be found in some oatmeal, and probably many other things you wouldn't imagine.  So be your own detective!

The final cookie was nothing short of amazing.  A little flat, chewy on the inside and crunchy around the edges.  I threw them in the freezer as soon as they were cool, and Mr. Preppy had a time dunking those babies in cold milk.  They are some tasty cookies! 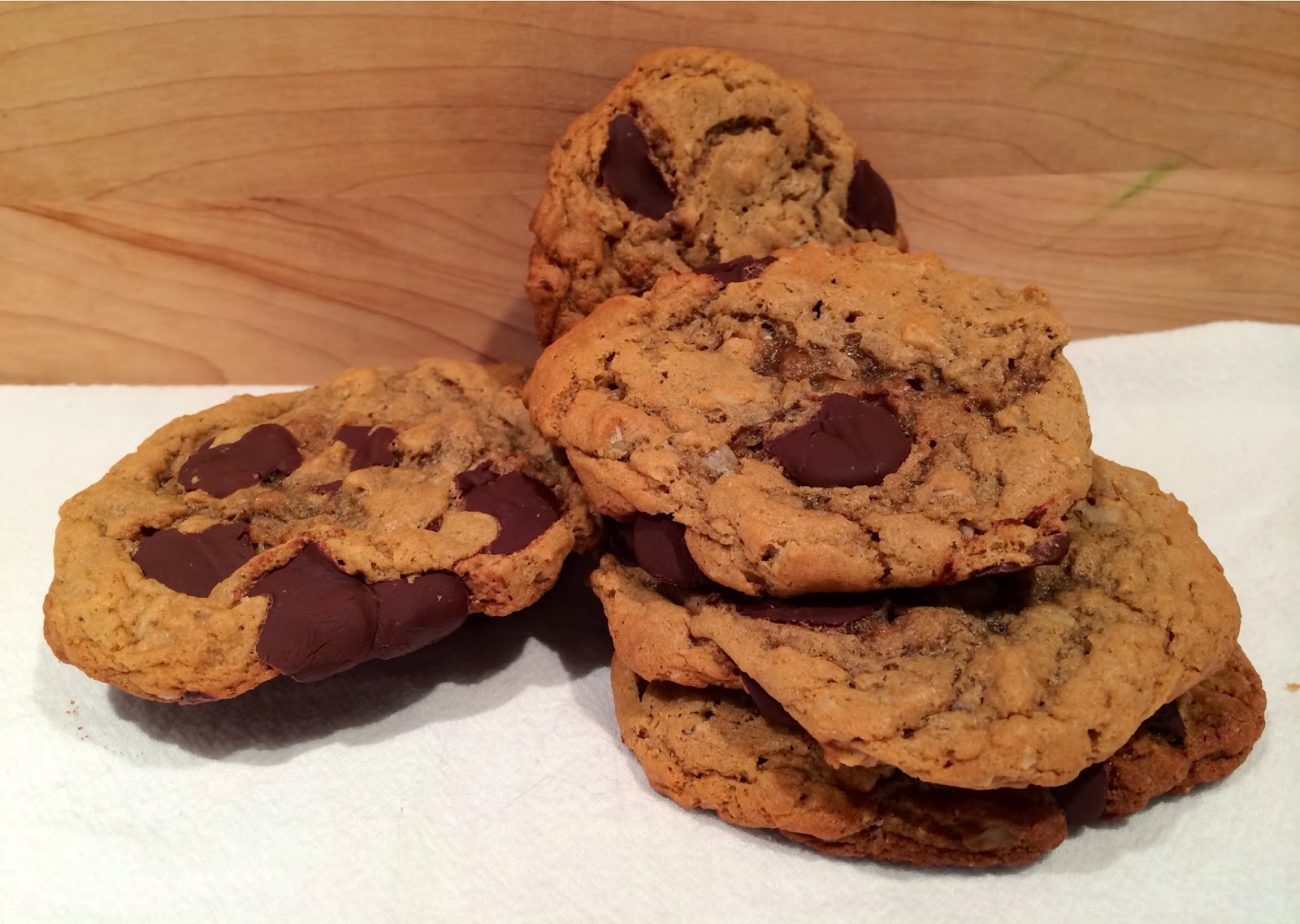 So what are you waiting for?  Get in there and bake! 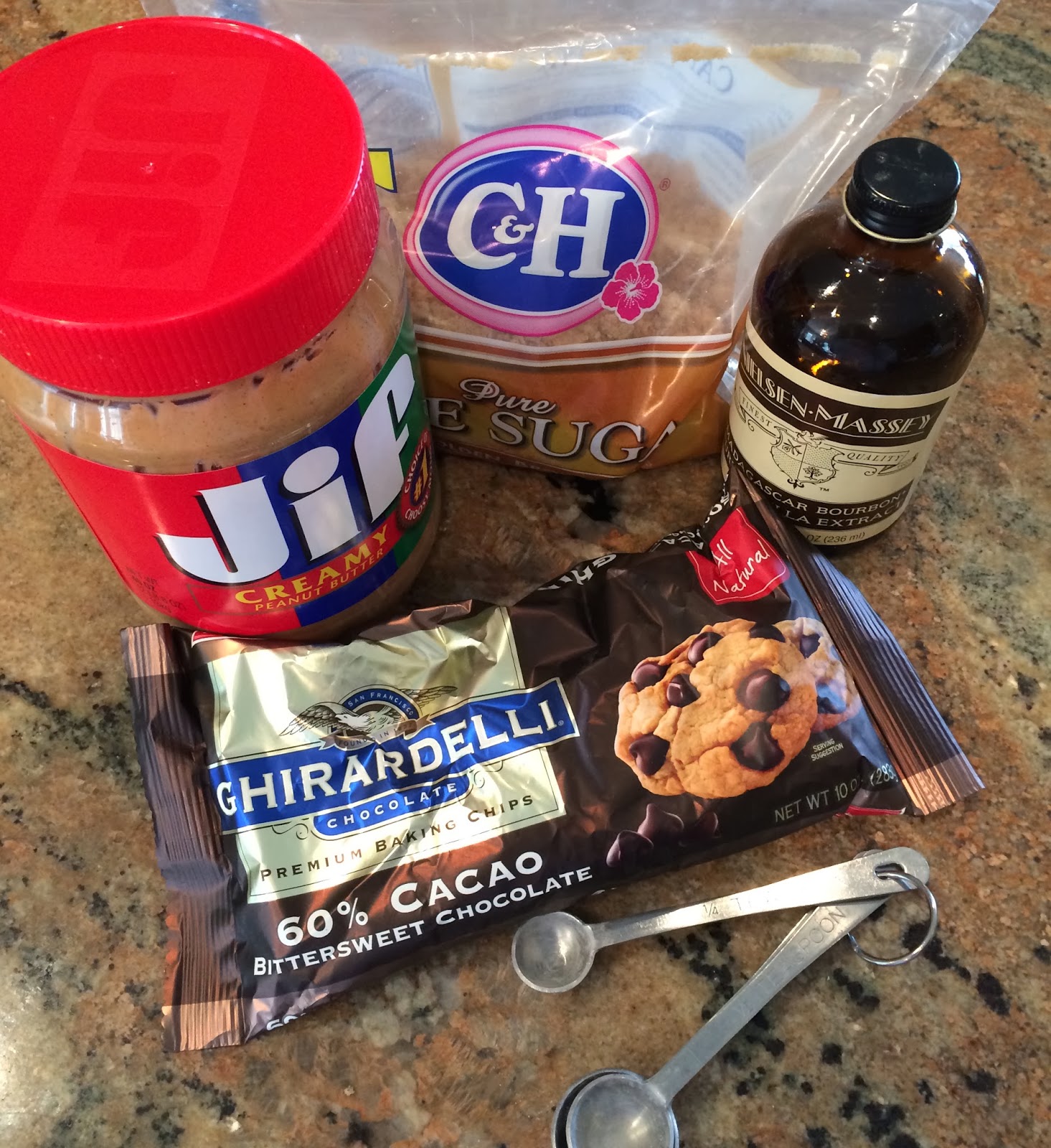 1 cup peanut butter (I use Jif)
1 cup light brown sugar
1 teaspoon vanilla (you know what kind I use!)
2 eggs
1 teaspoon baking soda
1/2 teaspoon baking powder
1 cup old fashioned oatmeal
chocolate chips (I used a 10oz bag of Ghiradelli and it was too much)


Cream the peanut butter and brown sugar.  Add the vanilla and the eggs and incorporate.  Then add dry ingredients.  When thoroughly mixed, add the chocolate chips.  Drop onto a Silpat covered baking sheet and bake at 350 º for about 10 minutes.  I made pretty large cookies and the recipe yielded 2 dozen. 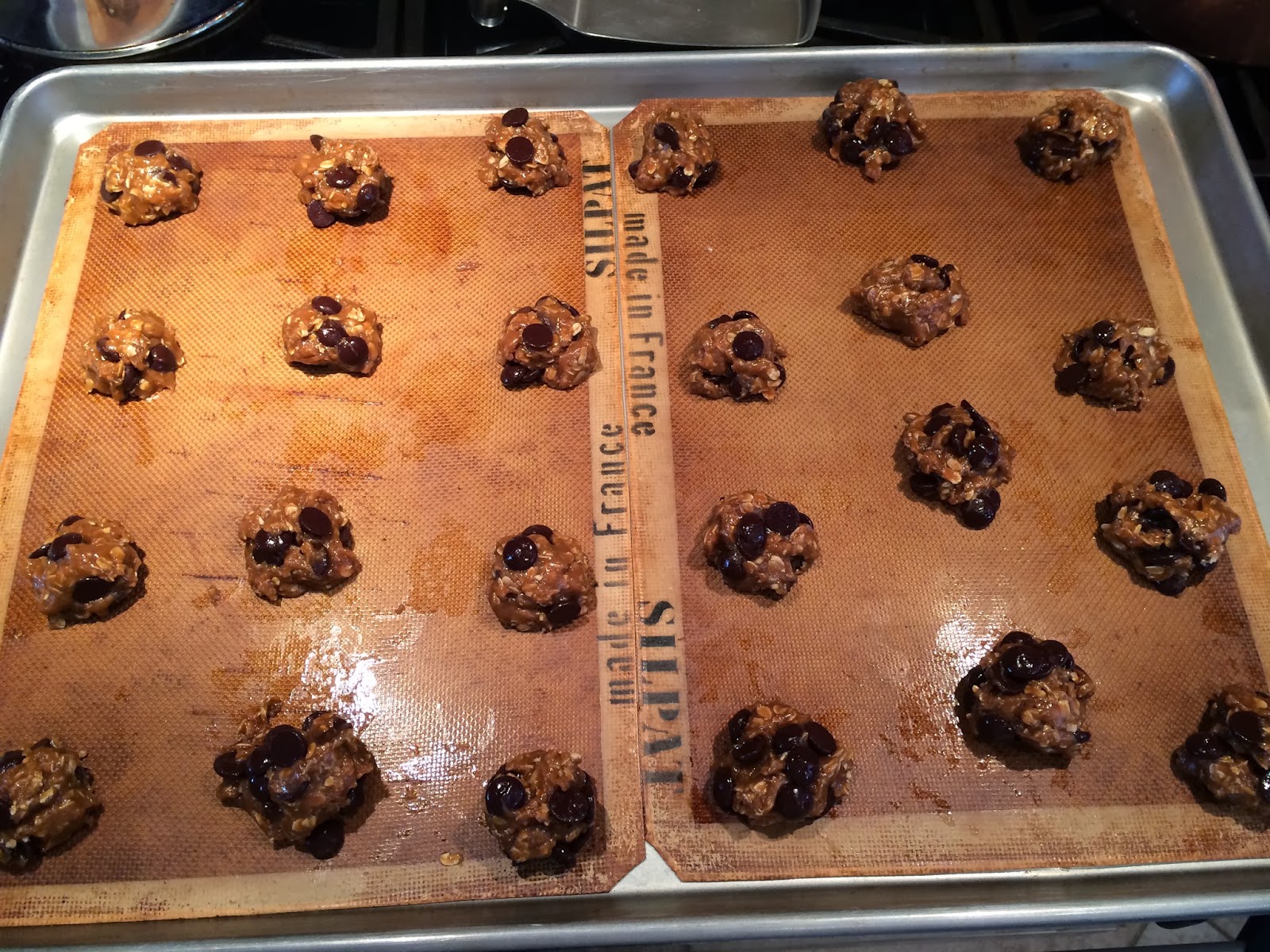 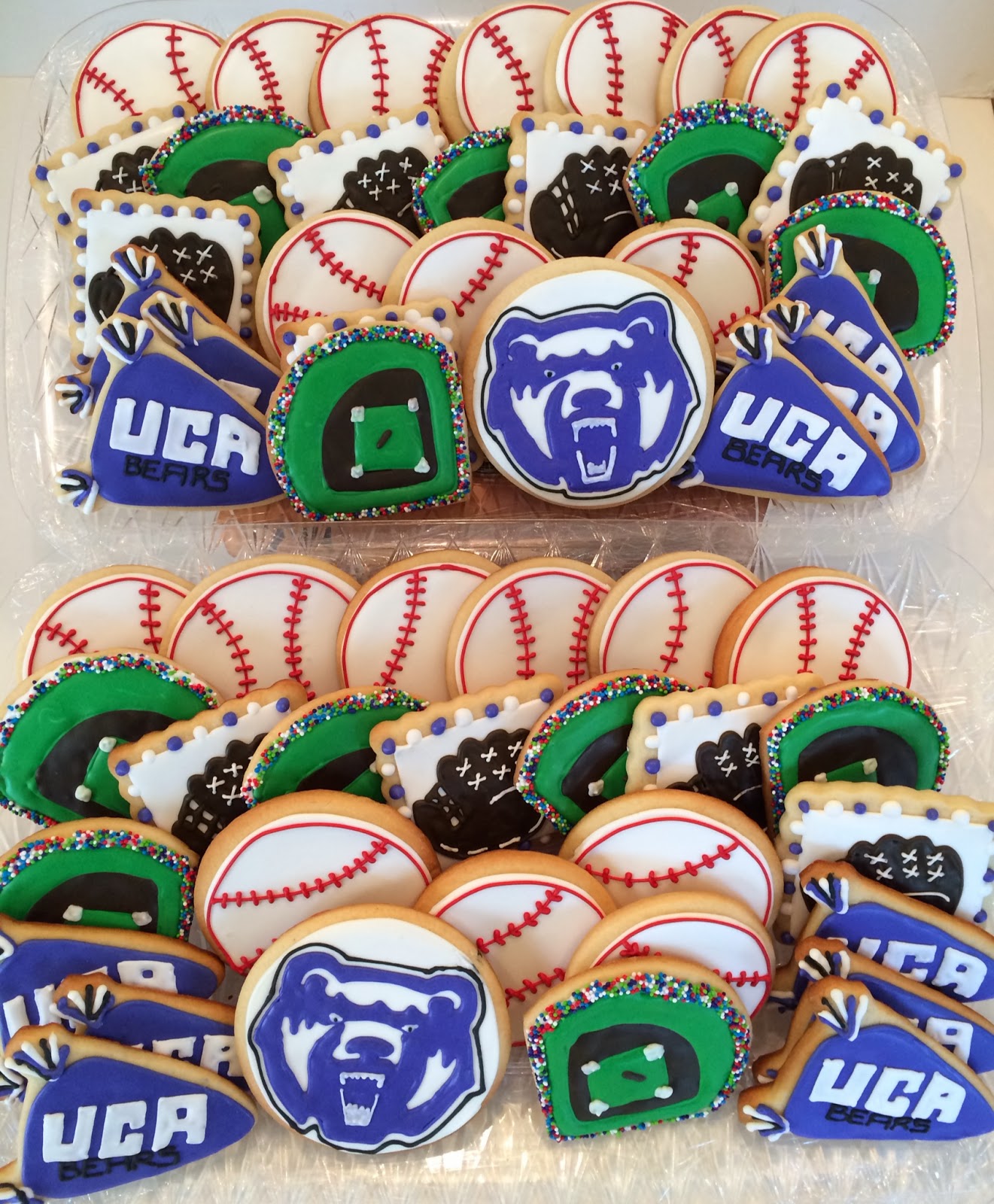 I spent no less than 14 years going from field to field, game to game.  And softball too.  It gets in your blood, and baseball is easily one of our favorite past times. (When we aren't traveling to a volleyball venue!)  When Nic dislocated his shoulder (s), and the baseball career came to an abrupt halt, Mr. Preppy became an umpire.  He loves it.  From the high schoolers to the college boys. Now I go to games that he umps, and I am SO relaxed not having a kid in the game!  So much more fun!  I made these cookies for a baseball mom and old friend.  Our sons played competitive ball together (50+ games) and now her son is coaching in a college program.  The team is heading to Memphis and she is throwing a BBQ for them.  I was thrilled to make baseball cookies.  A first!  Crazy right!? 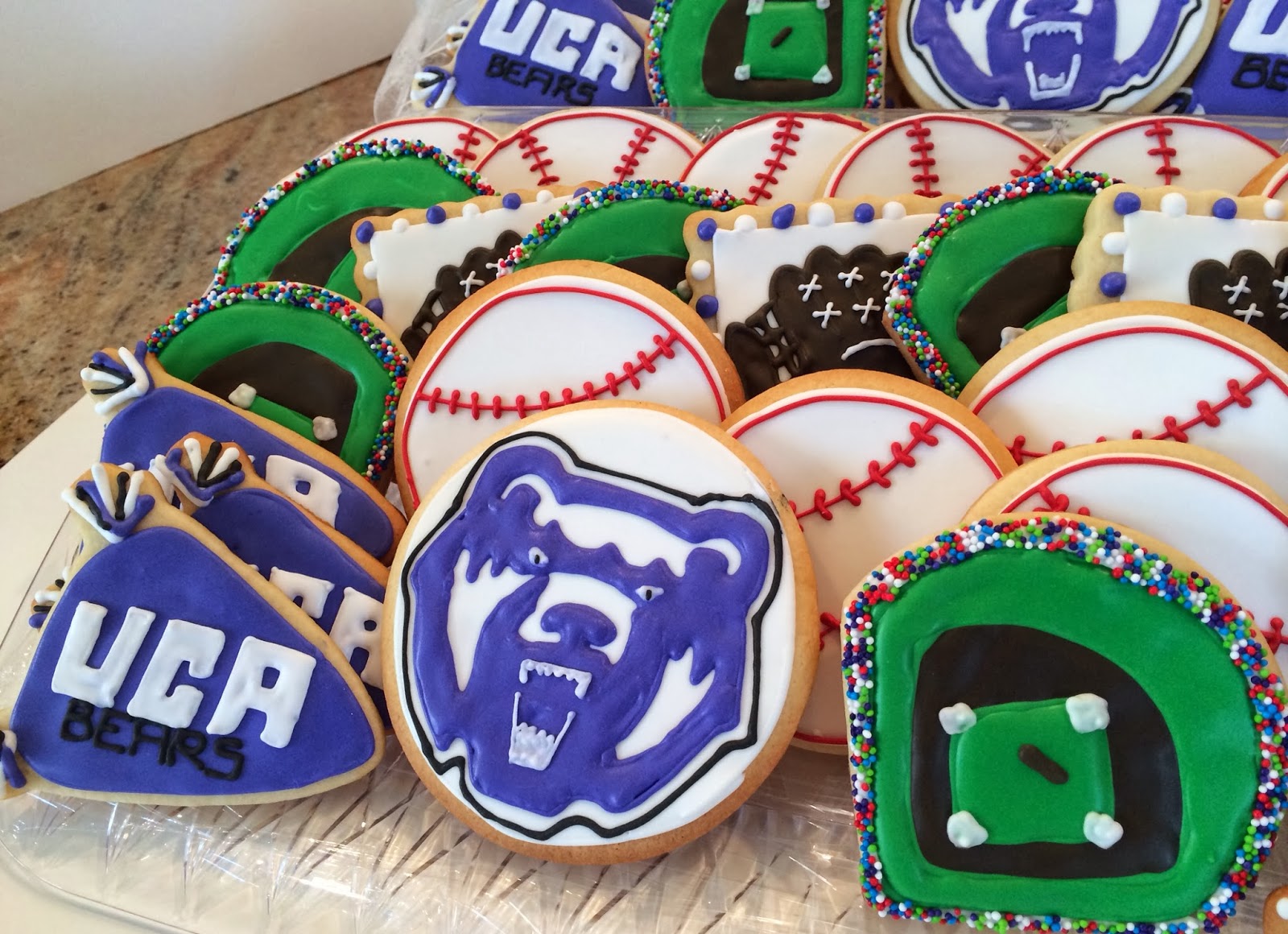 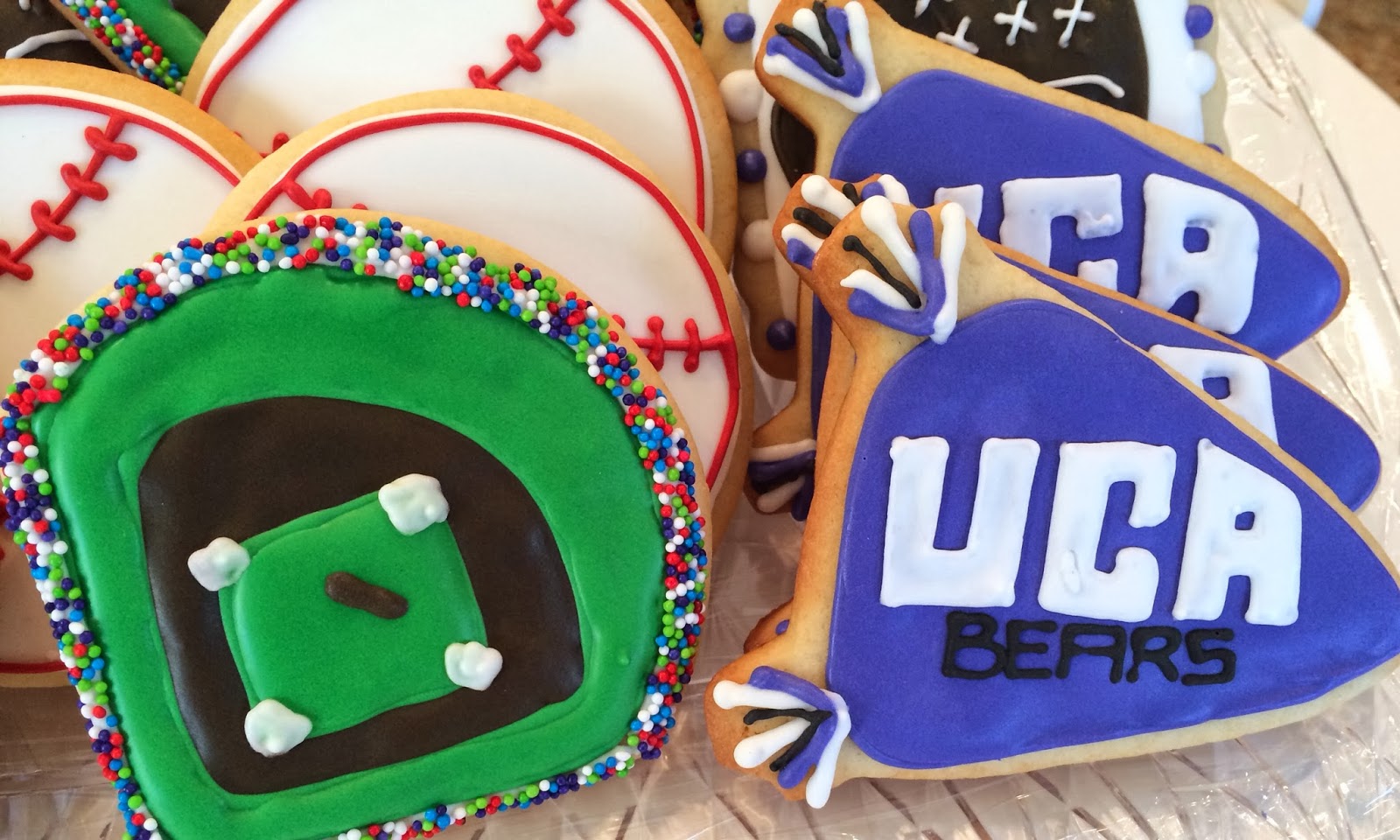 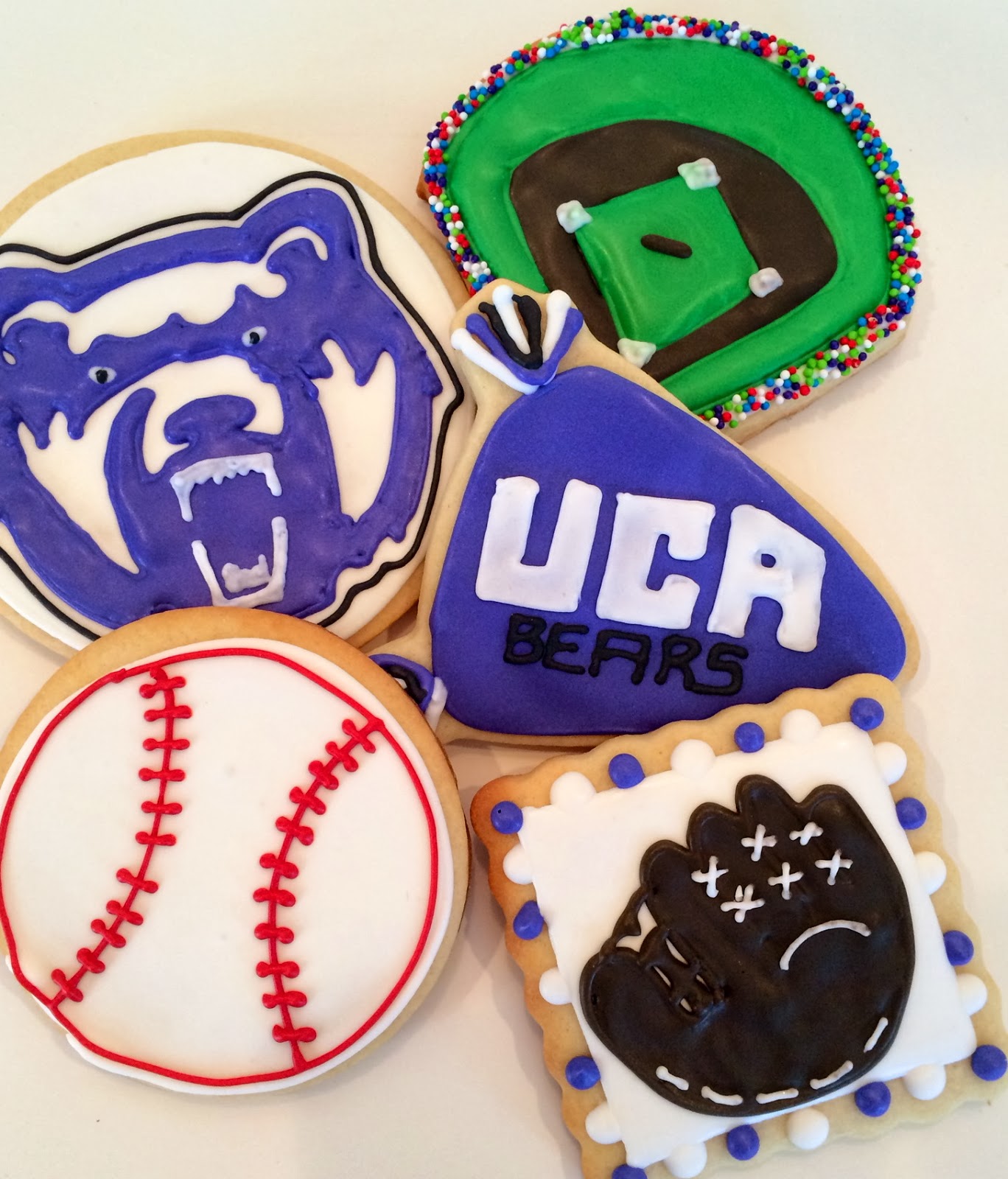 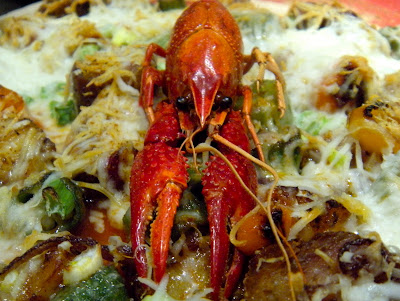 So Mardis Gras is upon us. I decided to rerun one of my favorite Mardi Gras dinners.  I am not cooking tonight, so it would be a very boring menu today!  It seems like winter just won't go away, and we even had a couple of snow days this week...but hang on, it'll be 60 on Friday!  Mardis Gras, Ash Wednesday and Lent are the precursors to Easter and the warm weather and sunshine. I am ready to open the windows and dig in the dirt!

I love a Muffaletta, a famous New Orleans sandwich with ham, salami, cheese and the famous olive salad. I have made it into a delicious pizza, much to the happiness of my family. The link is here, Muffaletta Pizza. And honestly, I really want to make that again for Mardis Gras. My favorite flavors on a pizza....but we need to try something new, right?  I decided to make this pizza a little more jambalaya-like, with andouille, okra, onion and shrimp.  And the crawfish.... 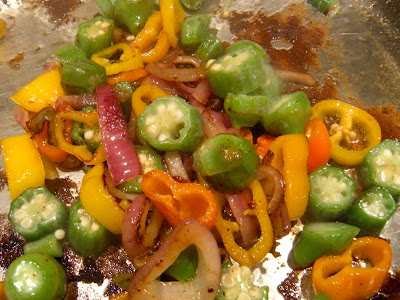 Sauté andouille sausage in a little olive oil. When the sausage is cooked thru, remove from pan and drain extra grease. Saute onions and peppers until golden, add okra and cook until thawed and tasty. Remove veggies and add chopped shrimp to pan with some Cajun seasoning (Penzey's is delicious) and a little beer (hey, you should be drinking one about now anyway) to release the browned bits from the pan. Cook through. 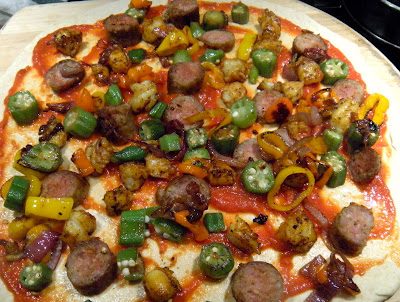 Layer pizza dough with sauce, the andouille, veggie and shrimp mixture. Top with shredded cheese. I sprinkle the cheese with a little Penzey's Cajun spice mixture and green onions. Bake in a very hot oven, I crank mine to 450°. We decided after eating the whole pie, that the shrimp rocked, and next year we are skipping the andouille and going with a shrimp and okra cajun pizza. And darn if I couldn't talk anyone into eating that little crawfish on top!  Of course the first time I made this pizza, my daughter was still in high school.  Having been in college close to Louisiana for 3 years, she is a pro at eating the crawfish.  I find them tasty, but the stickiness on my fingers is a gross out!  I think the packaged crawfish meat would be pretty tasty on this pizza however!

So, it is Mardis Gras, and tomorrow we fast, so why not have dessert? In keeping with the New Orleans theme, I decided to skip the King Cake and go for the Banana's Foster.

Melt butter, brown sugar and cinnamon in a fry pan. Add bananas and cook until they are a bit caramelized. Remove pan from heat and add rum. Mix until well combined and then carefully tip to flame (or ignite). When the flame dies down. Serve over vanilla ice cream. Serves 4. The original Banana's Foster recipes I came across call for banana liquor, but if you read my post on Dark and Stormy's it would come as no surprise that I am allergic to this too! But this simplified version is equally as delicious.
Laissez les bons temps rouler!
Posted by Susie at 9:49 AM 0 comments