A Peek at Halloween 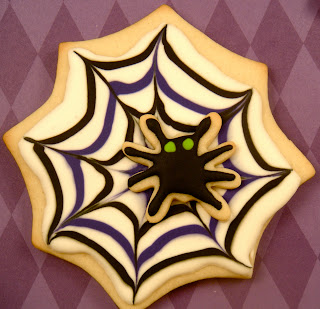 Wouldn't you be disappointed if I didn't make Halloween cookies?  Well, get in line.  I didn't.  I have a bin in the freezer, quite full, ready to decorate, but there is little time.  Tomorrow is Halloween!  I have to say I am a little sad to not have a group of teenagers around this weekend to cook for and help with costumes.  I was truly that crazy, crafty mom who planned the costumes every year.  We had some good ones, and lots of great trick or treating memories.  It was so fun when the kids were little because I could sort of talk them into costumes.  Nic always loved to dress up!  My favorite Halloween picture is this one.  The cookies, they are from last year.  Read the post before this one if you wonder why I have disappeared! 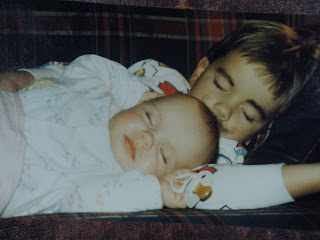 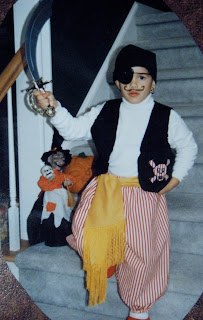 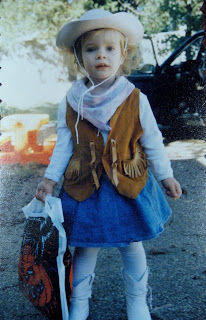 Then I took advantage of the boy girl thing and made them cowboy and cowgirl.  She was all for it because she got pink boots, and Nic got a gun! 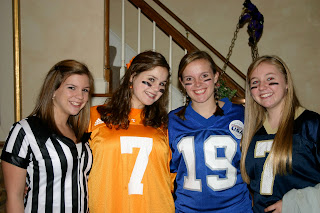 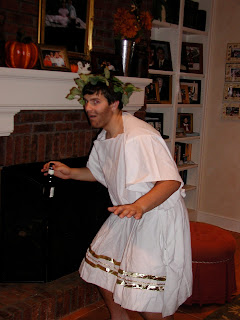 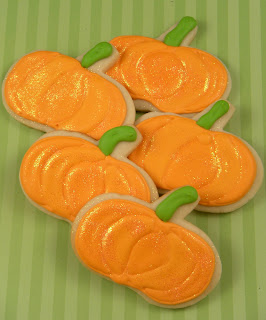 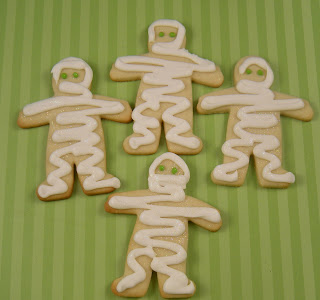 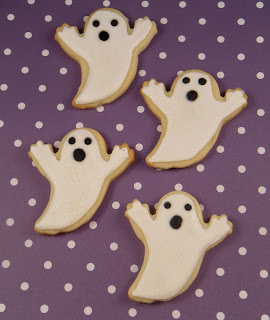 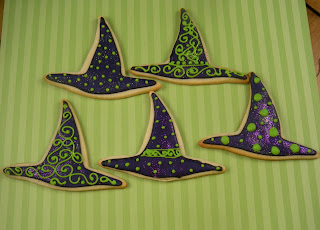 The spider on the web at the blog header are a favorite of everyone.  They are large, but they are a show stopper.
So hopefully we'll get a few kids here, and hoping you all have a great Halloween!
And later this week, I head to Cookie Con!  Sugar Cookie decorating mecca...I can hardly wait!  Much more on that later!
Posted by Susie at 7:55 AM 0 comments 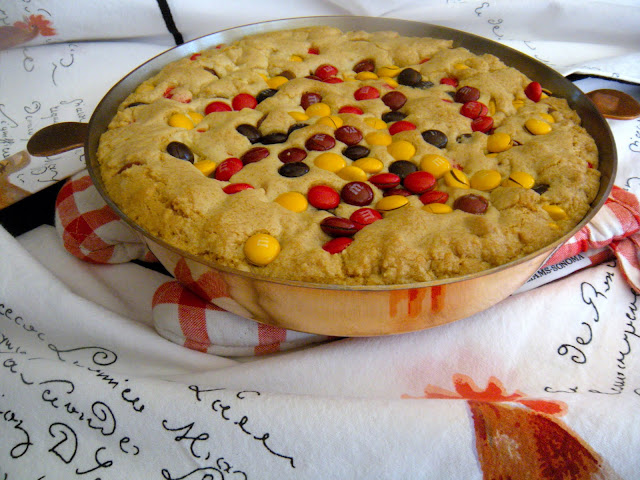 Ah fall.  Crisp sunny days filled with long walks through glorious colored trees.  And chilly nights with fires, cider and steamy bowls of soup....NOT!  Somewhere around the first week of September, I walked into my kitchen right into a puddle.  I had water dripping through the lights.  Four days later the water moved to another couple of rooms and in the process buckled 4 ceilings, walls and my kitchen floor.  So between traveling for football and volleyball, company, moving my MIL, the construction is finally winding down.  One week to go.  And then, I can make soup and bread and Halloween cookies.  I can open the doors and feel that fall breeze and finally move my fridge out of my family room, and my washer, dryer, toilet and gas range out of the garage!  Although, I will say being within arms reach of the wine cooler while watching Nashville is not the worst thing!  We really have made the best of a bad situation, and I am truly counting my blessings.

Since it will be a week or so until I am up and running, let's rehash something wonderful from last fall.  This is a great cookie I made for Secret Recipe Club.  So yes, it's a rerun, but a good one!  What are you waiting for?  A new floor, a new ceiling?  Me too!  Then we'll get back in there!


This recipe is from Heavenly Treats and Treasures, and don't we sound like a perfect match!  I was overwhelmed by how many things I wanted to make from this blog!

What caught my attention with this recipe was first the picture.  It is a giant cookie baked in an iron skillet.  How fun is that?  Total Southern right there.  It reminds me of those kitschy Southern restaurants where you drink out of Mason jars and dessert comes in cast iron.  I had to do it.  Especially since the recipe is adapted from Jacques Torres, and is called his Secret Recipe Cookies.  I mean he is Mr. Chocolate after all.  Then I continued to read, and the recipe makes 3 batches of dough which she recommends making each a little different with chocolate chips, nuts etc.  I love this idea from top to bottom.  She used milk chocolate with almond, dark chocolate and almond toffee.  I knew  I would drop in some Halloween M&Ms, I miss those holiday treats around the house.  Actually, I miss the kids who eat those holiday treats, around the house.  My empty nest, is, well, especially empty.  I am one who cries at a good commercial, and this month everything is having that effect on me.   Baking care package cookies is very good therapy. 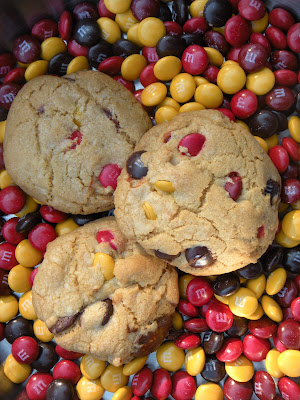 The recipe from her blog follows, but I hit a speed bump.  I did indeed use the fall colored M&Ms, (which match my house perfectly, how Stepford is that?!)  and I also had some leftover Guittard white chunks, and I threw in some bittersweet Guittard as well.  So instead of 2 pounds I went more like 2½ pounds.  My bad,ha, not bad at all!  Then, I knew, buried in a cabinet, I had 2 cast iron pieces.  It's been awhile, so as things are mixing I go and get my 12" skillet.  Ah ha!  I don't have one.  I sell them.   A lot of them.  But I actually own a pot and a deep 8" skillet. (And frankly, they look pretty cruddy.) Not at all good for this. Then I remembered the summer clearance sale.  I picked up a very cute copper tarte tatin pan.  It is only 9", but like I said, cute.  So I decided since Mr. Chocolate is French, it would work!  I packed the dough in and popped it in the oven.  I made giant cookie balls out of the rest of the dough. 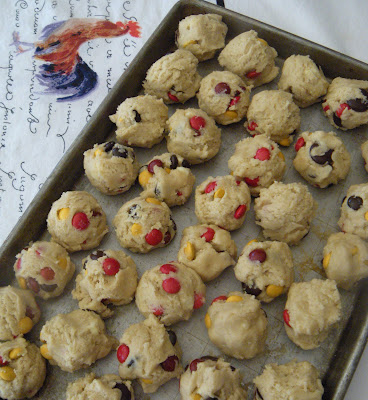 I froze one tray of dough balls and then froze them in bags for future baking.  Wouldn't my movie friends be excited if we were watching some great flick and I had cookies baking?  One giant cookie for each?  Great idea. Then I baked up a few cookies to mail to my favorite Oklahoma Sooner. 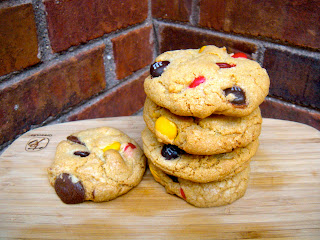 3 cups plus 2 tablespoons pastry flour* - the original recipe called for pastry flour, but I also didn't have any on hand so I followed her lead and substituted a blend of cake flour and all purpose flour, which approximates the protein/gluten ratio of pastry flour.  To make 4 cups of pastry flour whisk 2 2/3 cups all purpose flour + 1 1/3 cups cake flour together.  You'll have about 3/4 cup more than you need for this recipe, so save the remainder for another use.

2 pounds of high quality chocolate chips, wafers, or chunks - semisweet, milk, dark, or whatever combination you like.  She recommends using Scharffen Berger, Callebaut, or Valrhona chocolate if you can get your hands on them. I concur, and I used Guittard.  You know, discount.

The first step was making her vanilla bean brown butter.  This is new for me, but I love brown butter, and decided I needed to make this for the full effect.  Here are the directions from her post.

Cut each stick of one pound of unsalted butter into quarters.  Add butter, 1 vanilla bean and the seeds to a medium saucepan. Heat on medium, stirring occasionally, until the butter turns golden and smells nutty.  If will foam and then begin to clear when it is almost ready.  Remove butter from the heat and cool it slightly.  Remove the vanilla bean, then cover and place it in the fridge for about 20-30 minutes, until it's the consistency of softened butter.  I browned the butter and then added Vanilla Paste.  I think the effect will be similar and it works when there are no vanilla beans in the pantry!  And let me tell you...when I took this out of the fridge and chopped it up to soften a little quicker, the aroma was amazing.  I have a BIG idea for this...stay tuned.

In the bowl of your stand mixer, using the paddle attachment, cream the butter and sugars on medium speed.  Add the eggs, one at a time, mixing well before adding each one.

Add vanilla to the egg mixture and beat until well blended.

Add 1/3 of flour mixture at a time to the batter, using an on/off pulsing motion until just about incorporated.   After you add the last 1/3 of the flour, stop mixing just before it's all incorporated.  Add the chocolate, a little at a time, mixing on low speed just until incorporated.

Spread 1/3 of the dough into the prepared pan.  Bake for about 25-30 minutes on the center rack, just until golden on the edges but still soft in the center.  Don't over bake!!  It will continue to bake in the skillet when you remove it from the oven.

Cool on a baking rack for about 10 minutes.

She offers a recipe for a caramel drizzle on her blog, but I opted not to use it, since I will be taking this to my daughter.  And remember, there are 2 sections of dough left.  Which means, a box for Nic and some frozen dough for an emergency!

This was pure pleasure.  I eat dough, not cookies, and this was tasty.  Again, I was alone, so I had no one to taste the finished product before reveal.  This is a keeper recipe, and I am going to hunt out some pastry flour to try it again.
As a footnote, I baked up a couple of cookies when my hubby returned (he looked everywhere for the colossal one, but it had already gone to college!)  They were so delicious right out of the oven.  That browned vanilla butter was delicious! 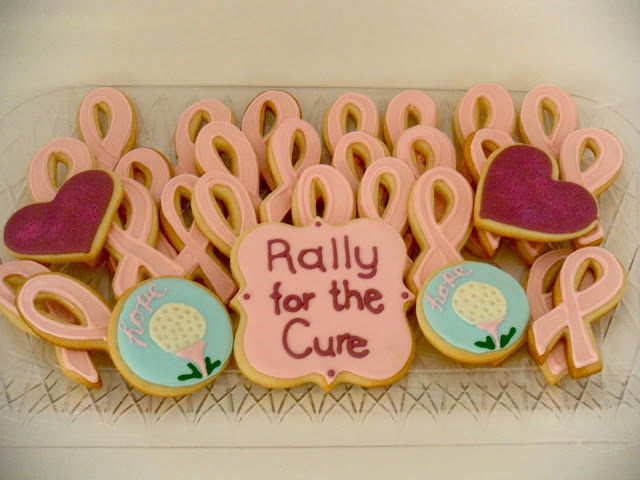 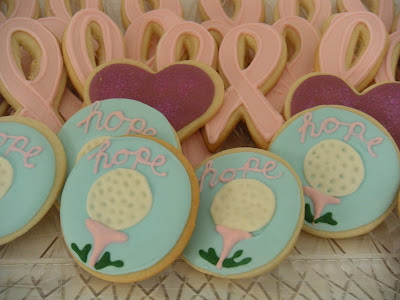 Here are some Rally for the Cure cookies I made for some friends who hosted a golf tourney.  I have a special place in my heart for this, my sister Lori is in her own breast cancer fight and doing quite well.  October is awareness month, so don that pink! 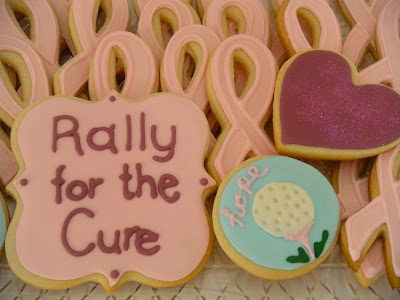