50 Chefs for 50 Years and Gilligan's Island

What?  Didn't you say this was 50 Chefs (or cooks)?  What the heck is Gilligan doing here?  For you young readers, check out the Gilligan's Island Wikipedia, and let me explain.  When I grew up, way back in the 70's, we had 3 channels.  Every day after school, we would watch Gilligan's Island (best theme song ever!) and the Brady Bunch.  Then, we would head to the big woods in my yard and we would play on the fallen trees, building forts and making our own little Gilligan's Island.  We always fought over who got to be Mary Ann.  Neither me, nor my friends, were Gingers.


So fast forward to January, 1994.  I was visiting my parents with my little children, (they were 4 and 1) and The Hurricane, a restaurant on Passe-A-Grille, was having a shipwreck party.  I was so excited!  I met Gilligan, Mary Ann and the Professor.  Sadly Gilligan passed away about 9 years ago, and the professor, Russell Johnson passed away last week.  They were the nicest people and they so understand what an important part of many childhoods they were.  Gilligan even wore the hat!  But it is crazy when you think that the show aired prime time in 1964-1967 (I was born in 64),  but was a daily standard throughout most of the early 70's.  All reruns.


Since my childhood friends would be turning 30 in 1994,  I bought the Gilligan's Island Cookbook for a few of them, and had them signed.  Of course I bought one for me too!  The book is a funny read.  It has lots of photos and quips from the TV series.  There are little bios on the characters (not on the actors who played them) and then lots of recipes.  The book is compiled by Mary Ann, aka Dawn Wells.  And the recipes aren't terrible, but they all have these goofy names to them that incorporate many of the characters who visited the castaways, and never seemed to help them get off!  What I love about the book is that there is 11 recipes for coconut cream pie.  Ha!  Guess what we are making?  The show may not have been an influence in my cooking, but I don't care.  It is signed and part of my collection.  So yea, Thomas Keller is coming, but today is all about MaryAnn.   It is my childhood, and I have never made a coconut cream pie until now!  The big dilemma was which recipe?  Mary Ann's?  Skipper's?  Mrs. Howell's?  Well of course Gilligan's.  So, just sit right back....

Pre bake the pie shell according to directions on the package.  I used a roll out shell from a nice organic market.  I baked it with pie weights, and then finished it off without to brown the crust.  Cool.

In the top of a double boiler over simmering water, scald the half and half.  Add sugar, salt and flour and whisk until smooth.  Cover and cook for 15 minutes.  I found my custard quite thick after 5 minutes.  Keep an eye on it.  Separate the eggs and beat the yolks.  Remove the pan from the boiler, and slowly whisk in the egg yolks.  Return pan to the water and cook for 5 more minutes, stirring.  Remove from heat and add vanilla and coconut.  3 cups of coconut is a lot, and my filling turned into dough very quickly.  I added more half and half to try and loosen it up a little, but still I had to press it into the pie shell when it was cooled.  It was not custardy at all.  It was like the inside of a Mounds Bar, although my coconut was unsweetened, I felt the sweetness balance was perfect.  I think a sweetened coconut would have been too sweet.  I also think a graham cracker crust would be pretty tasty!

Beat the egg whites with remaining sugar and vanilla until stiff peaks form.  Spread over the pie and toast in the oven (or with a torch) until browned.  Makes 6 servings. (Huge servings!) 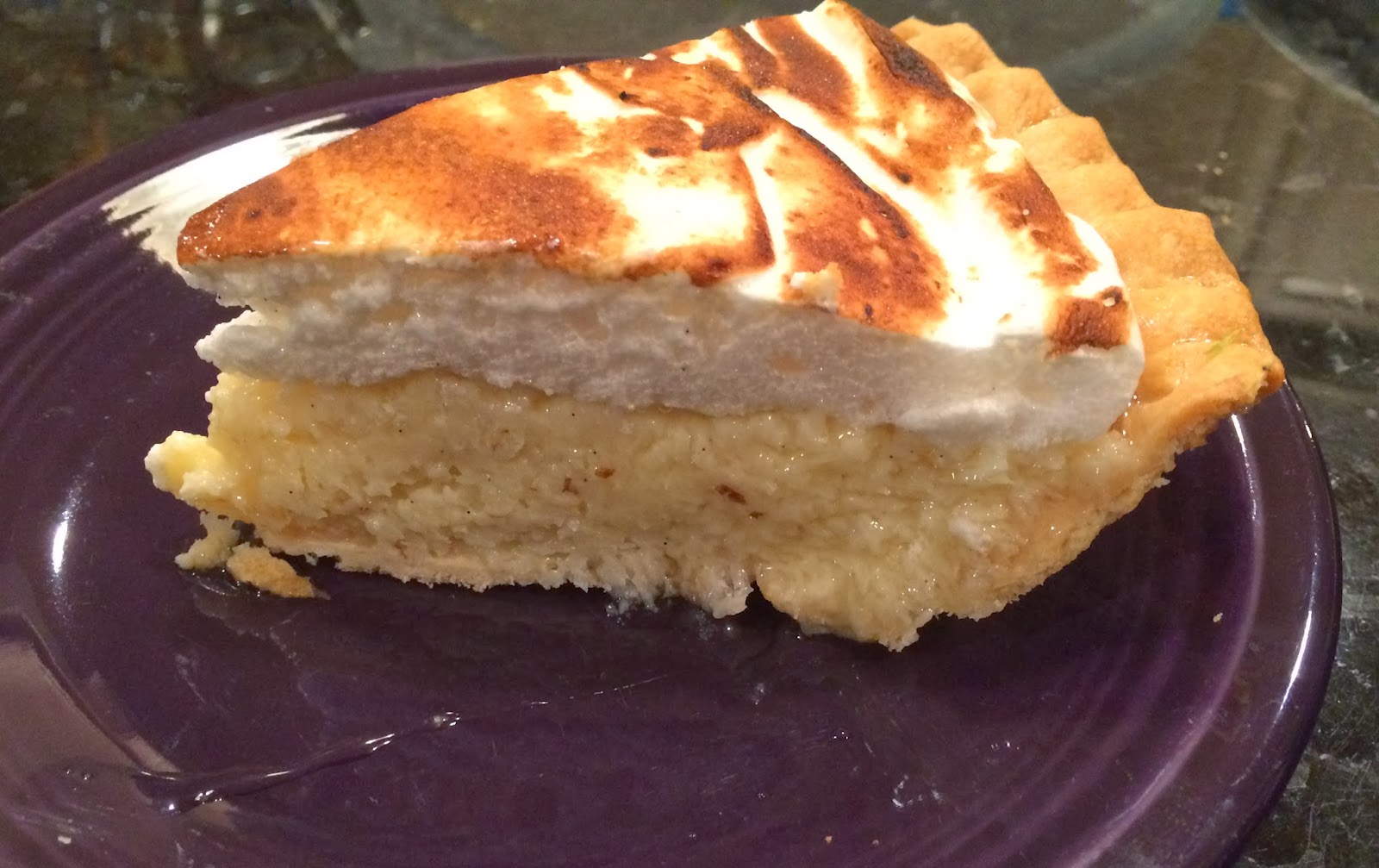 If you missed any of my previous 50 Chefs for 50 Years posts, here's an easy way to catch up!

So, I need to get going on these 50 chefs!  I doubt I will be done by my 50th birthday, but I will finish!  My last post was a Southern blondie which I made to test the recipe before I sent it out to our Supper Club.  As I rounded out our Southern Supper menu, I used John Currence's recipe for the main.  The entire dinner was delicious, and I was emailed by a dozen folks saying thanks for a delicious dinner.  I wrote the menu, and 20 couples in the neighborhood cooked and ate it.  We are a very well organized club, and usually I get huge anxiety writing the menu.

Let's start with John Currence.  He is a chef based in Oxford, Mississippi, one of the most charming Southern towns ever.  He operates 4 restaurants there, and we have been to three of them.  City Grocery, Snack Bar and Big Bad Breakfast.  City Grocery is right on the Square in Oxford, and is a charming place, famous for Shrimp and Grits.  Delicious stuff. Snack Bar is a little off the beaten path and a customer told me it was her favorite Oxford restaurant.  It's small and quaint, and the menu when we went was delicious.  Great cocktails too!  Bubba Brasserie is how the website describes it, quite accurately!  And the last of his restaurants I have been to is Big Bad Breakfast.  Located next door to Snack Bar, pick up a Bloody Mary and wait on the porch for a table.  You will wait.  In the summer on Saturdays, the farmers market is set up and you can wander around the booths while you wait.  But trust me, breakfast is worth the wait.  Tabasco cured bacon, home made biscuits....everything is so tasty!  CNN also named it one of the Top 10 Breakfasts....IN THE WORLD!  He has one more restaurant Boule which I have yet to visit, but the menu looks great, and it is on the square.  Looks like a Saturday trip is in order.  Food, books, strolling.  I love Oxford, and Chef Currence has made me fall in love with the essence of Southern food.

So on to the menu.

Shrimp Toasts
This is a basic cream cheese based appetizer that you spread on a crostini and broil until bubbly.  There are a jillion versions of the recipe, and they key is to keep them small, so the cheese gets bubbly.   I chose this specifically for Mr. Preppy.  It was right up his alley. 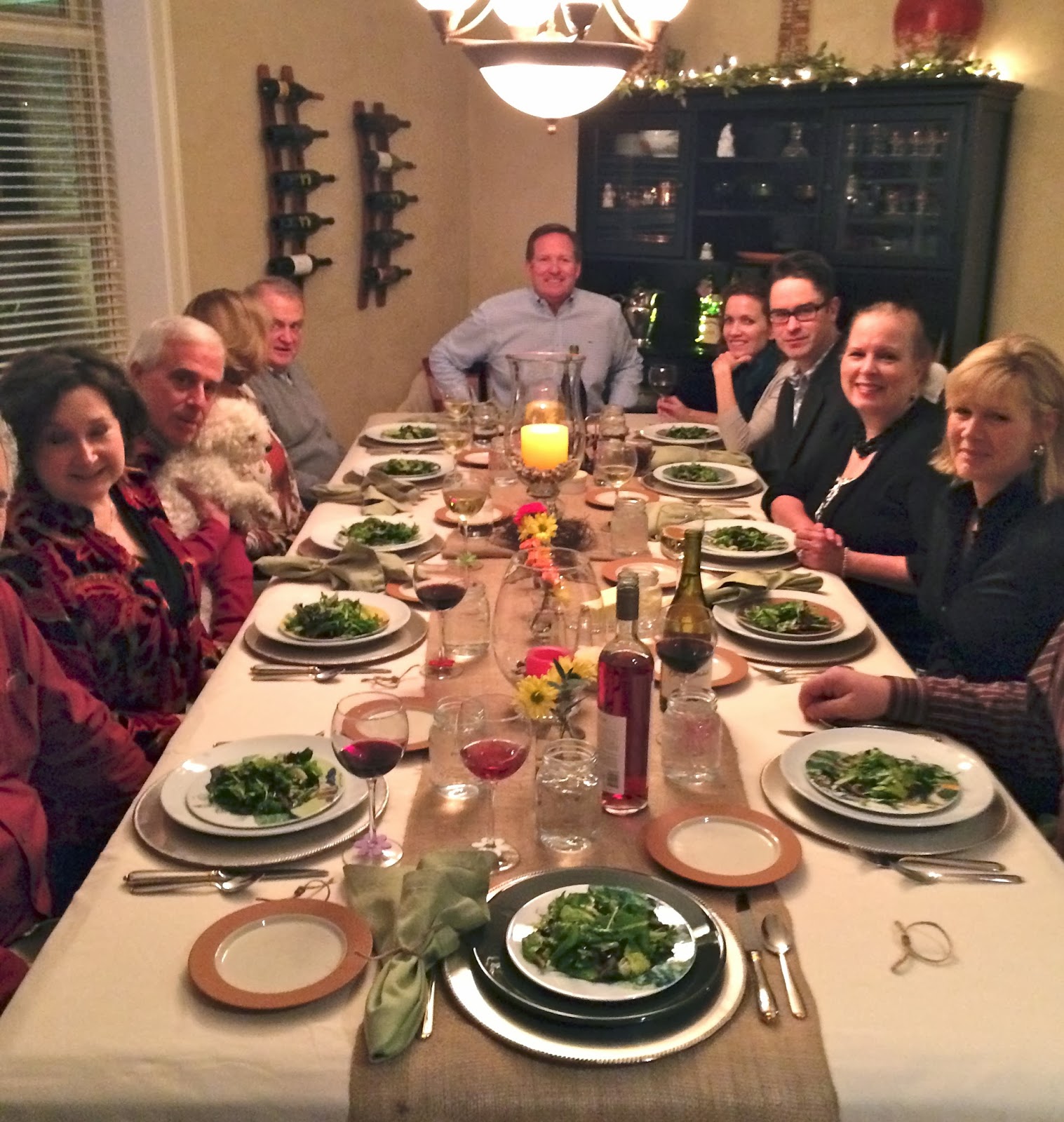 Crisp Winter Greens With Sweet and Sharp Dressing
The salad was a big hit.  The dressing was really delicious, and everyone cleaned their plates.  In the future I would use a heartier choice of lettuce, and maybe even put a little kale in there.  The dressing wilted the artisanal lettuces, and I really wanted some crunch.

Collard Green Gratin
This was beyond delicious.  My friend who made this for our group, has made this recipe before, and she did a little tweaking.  Most noticeably was the assortment of greens she used.  Collards, spinach and kale.  It was my favorite dish of the evening, and I only ate half of my piece of chicken.  This was all I needed!

Oven Fried Chicken Breasts
This recipe is from John Currence, and it is mighty delicious.

The breasts are brined in sweet tea, Tabasco and Worcestershire.  They were tender and juicy after a dredging in seasoned flour and a pan fry in butter and oil.  I made these for a party of 12, and I did have to clean out the pan a few times as the butter will burn.  Next time, clarified butter may help with that. They finished in the oven in about 15 minutes, which however, was not long enough for the gravy to really come together.  The gravy was fine, but mine never really thickened up.

Biscuits and Cornbread with Honey Butter
In the Food and Wine article where the chicken recipe is found, Chef Currence has a recipe for Salt and Pepper Biscuits.  I knew this would not go well over for the hostesses, so I suggested any kind of biscuits.  My friend Nancy brought frozen biscuits which were fantastic slathered with honey butter.  I never tried her cornbread muffins, but they were popular at dinner too.

Caramel Brownies with Brown Sugar Frosting
I blogged these last time, and they were such an unexpected treat.  Sweet, yes, but as my neighbor said, nothing a little ice cream can't cut.  Indeed, who would think that vanilla ice cream would cut the sweetness  of anything!  These will make another appearance around here for sure!

If you missed any of the previous chefs, here they are.  And stay tuned, we have a long way to go!  What are you waiting for?  Get in there and cook! 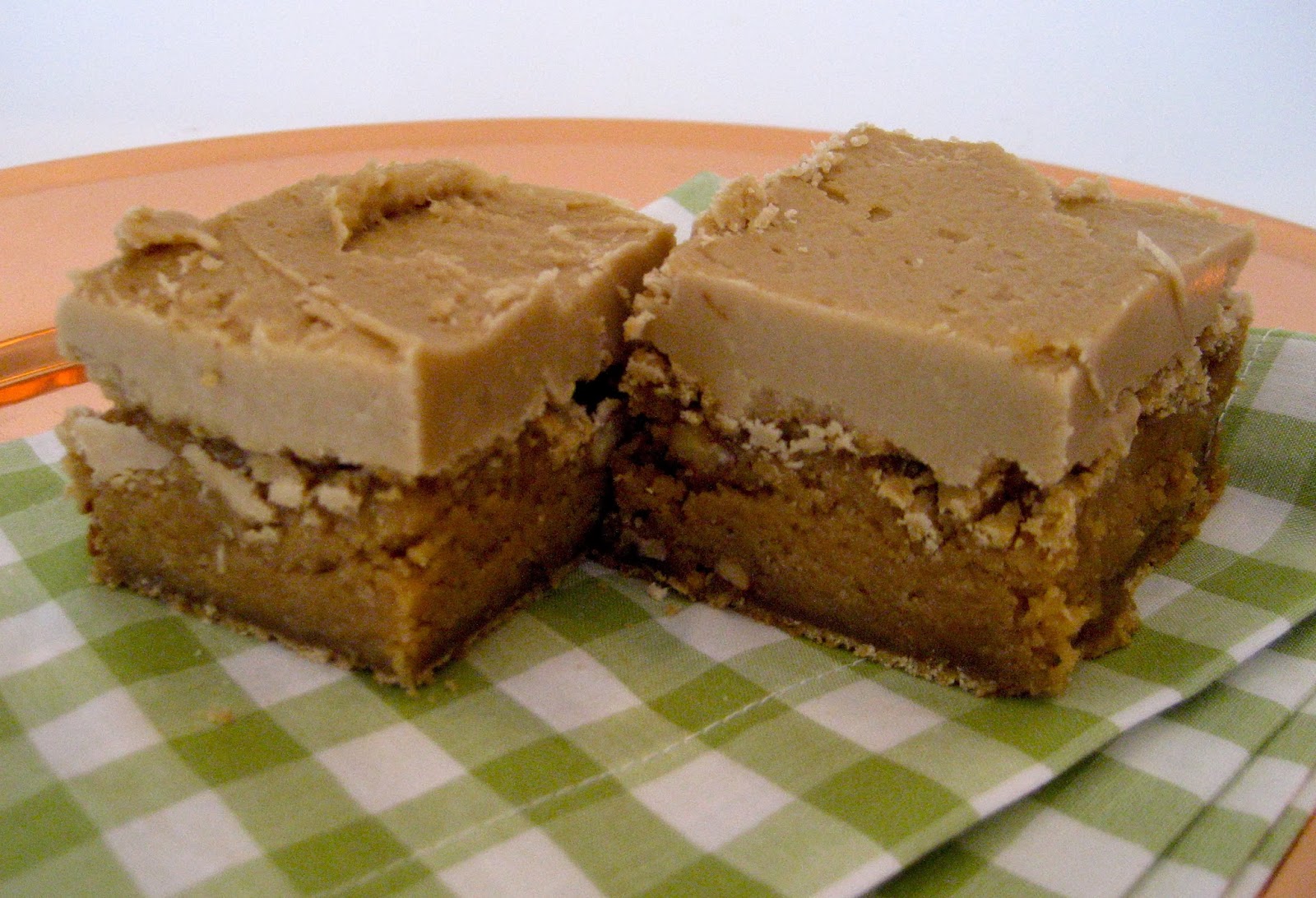 I know I need to get back to my chefs....but today I had to send out the menu for Supper Club.  I hate making menus!  I settled on a Southern theme, and decided I had better make this dessert before I ask all these other women to do so!  There is an amount of pressure when you know 20 couples are eating the food you suggested.

This recipe comes from the Women's Exchange of Memphis.  Founded in 1885, it remains a great idea.  Basically a consignment store for seamstresses and crafters, it is a volunteer organization with some of the cutest stuff around.  The very best place to buy a baby gift, and their tearoom is a popular lunch spot.  So when I came across these brownies (actually a blondie), I decided they were the perfect dessert for my menu.  My menu is more of a Sunday Dinner in the South than stuffy supper club.  We can create anything, and January always has me hankering for family food.  I guess I just miss everyone so much in January!

I made these in an 8 X 10, and they are quite thick, better for a dessert.  They can be made 9X13 which would make them thinner, not a terrible thing.  They are really rich!  Here's how they went:

Preheat oven to 325°.  Blend butter and sugar until well beaten.  Add eggs.  When eggs are incorporated, add remaining ingredients and mix.  Pour into greased 9X13 and bake for 20-25 minutes.  Check for the sides to crisp before the center, but do not overbake!  Cool before frosting.

Melt the butter in a saucepan, and then add the brown sugar and stir until the mixture begins to boil.  Stir constantly and boil for 2 minutes.  Add the milk and salt, bring back to a boil and then remove from heat.  Cool until lukewarm.  Add the sifted powdered sugar beating with a mixer, and add vanilla.  While the icing is pliable, spread on cooled brownies. 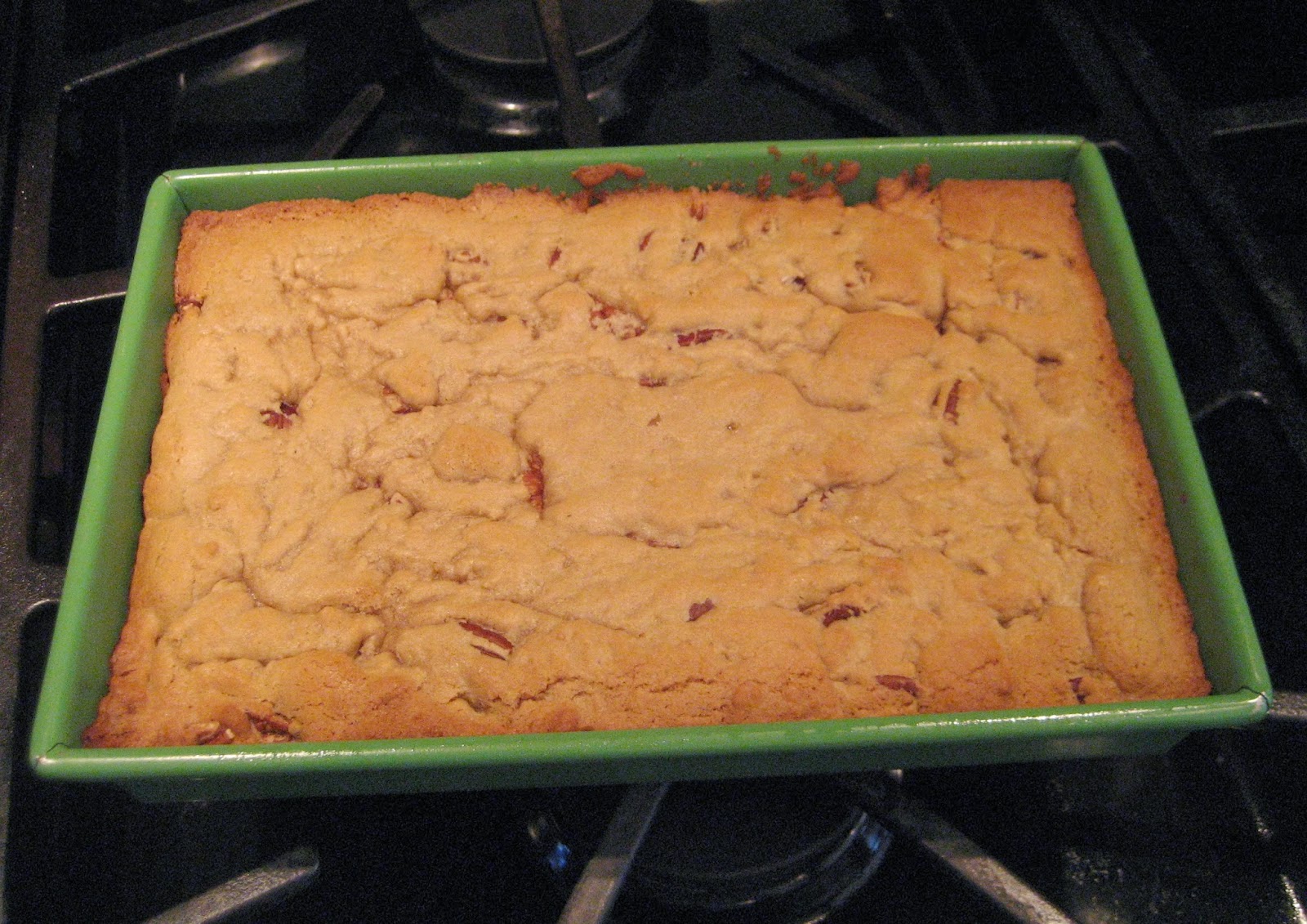 I am loving this whole brown sugar business, so warm and different this winter. We thought these would be delicious without the icing as well. Either way, these are a winner for sure.  So, what are you waiting for?  Get in there and bake!!