One of my favorite days of the year.  We'll sit around the table as a family and hold hands and pray for those who need our prayers and give thanks for our amazing gifts....count your blessings and give thanks! 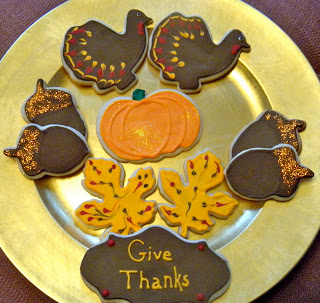 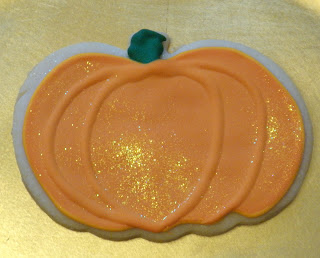 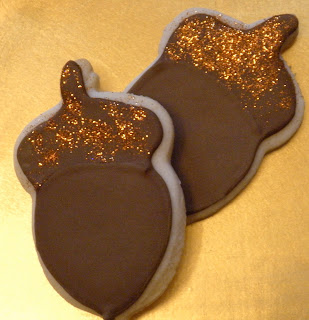 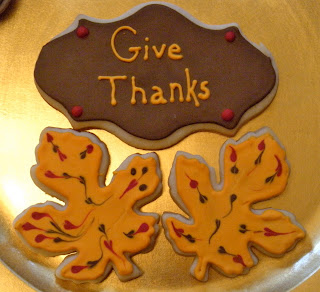 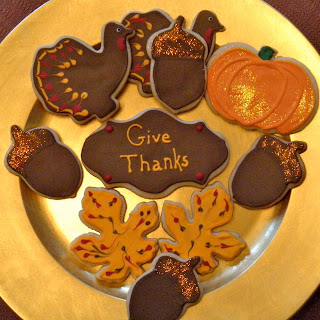 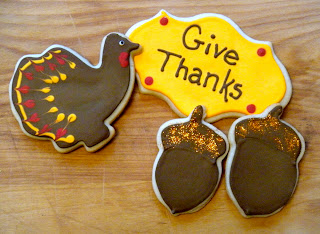 A Happy Birthday Away From Home 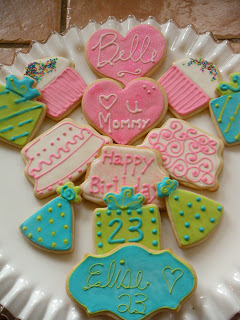 So this summer on my journey around the Midwest, I caught up with my cousin Joyce and her husband Alain from Canada.  At our many cousin reunions over the years I had met their children, but we haven't had a reunion in years.  So when Joyce asked me to send cookies to her daughter, in graduate school I said sure, but where did the time go?!

She originally wanted something that would reflect Elise's love of Chinese Art and Antiquities, so Joyce got lost on the cookie cutter web sites, "Who knew?" was her response!  Tell me about it, it is amazing what is out there.  But no Chinese soldiers or Buddhas, so we went with the more traditional birthday fare!

Happy Birthday Elise!  I know your Mommy misses you.... 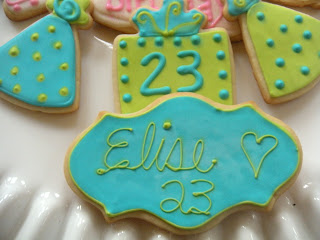 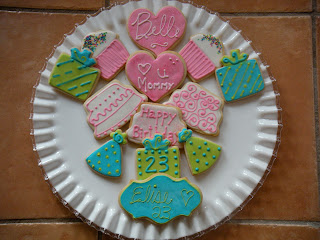 So volleyball has finished, and work has begun!  Tis the season, and things really ramp up at work, so life takes a different twist!  I have been baking pretty regularly, and have a few cookies to share.
First some Alabama Alpha Phi cookies for a neighbor. 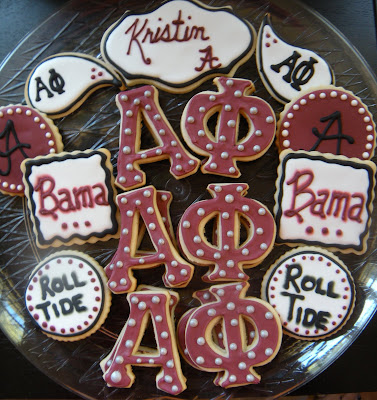 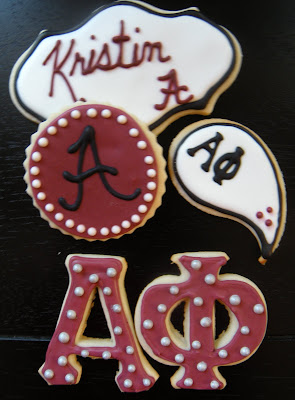 Then I helped out with the Chi O bakes sale fundraiser.  I did some Chi O cookies and I wanted to make the blue swirl cookies to be like the Make A Wish star, but they aren't pretty enough to share...of the dozens I made I shot a picture of a bad one!  The cookies were pretty simple, I made a lot, hopefully they raised some good money for a great cause!  I have been buying up the Greek letters for the sororities and frats, and some of them I dislike in a mean way.  That omega (farther down) is a real beast to unmold, and the design is thin and fragile after baking.  I opted for some fat letters from an old set, since these particular cookies were in a bake sale, I knew fragile would not be good! 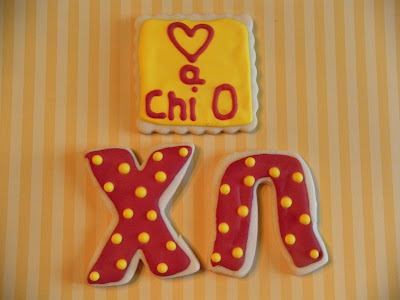 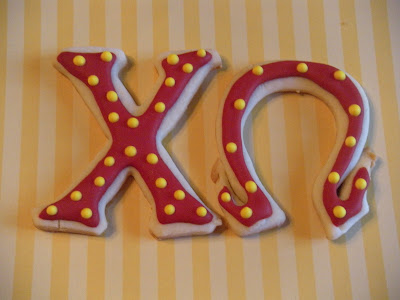 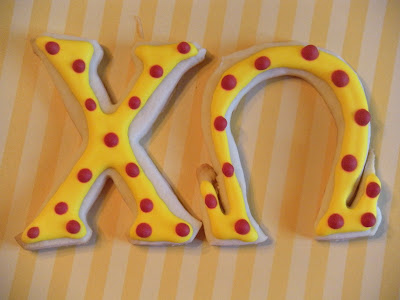 And then I did a few birthday surprises. An 18th for my friend's daughter who was almost a Halloween baby! And hopefully Meghan's cookies were okay because Priority Mail took almost 10 days to get to her!  I experimented with a new meringue powder, and the dark green was kind of blotchy.  I was not terrible pleased.  But the taste was actually better than the other meringue powder I use! 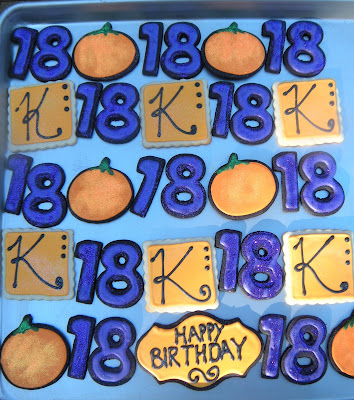 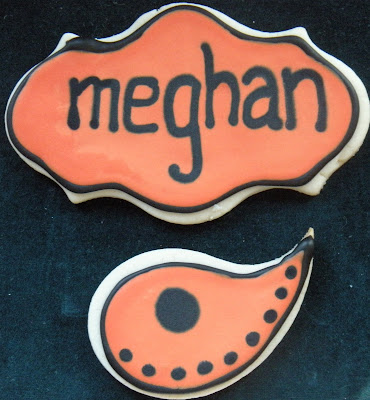 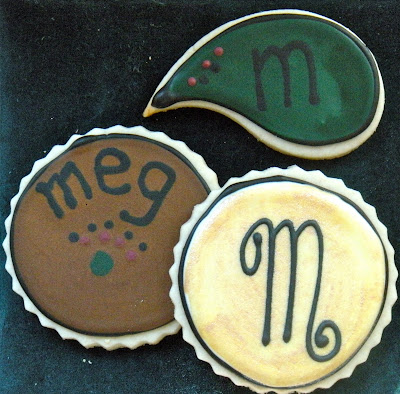 And finally a few cookies for Thanksgiving.  I will be baking up more of these in the last week and change before turkey day!  And then it is all about jingle bells and elves!  I can hardly believe the season is upon us! 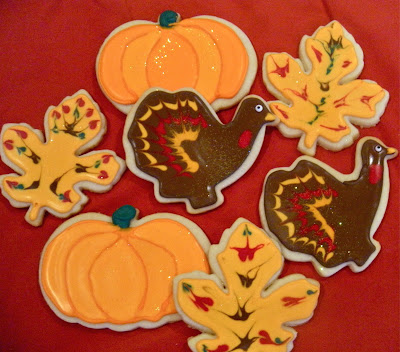 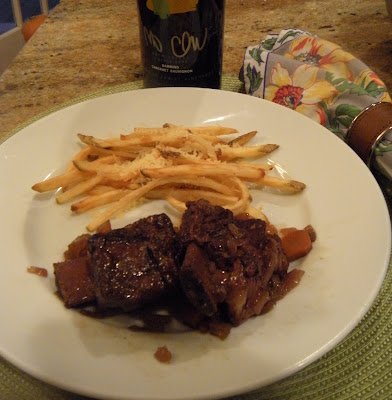 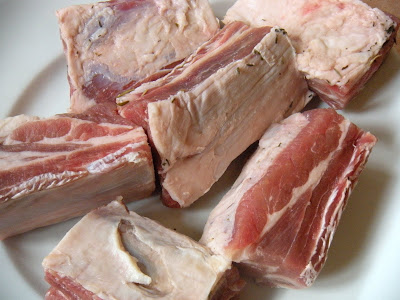 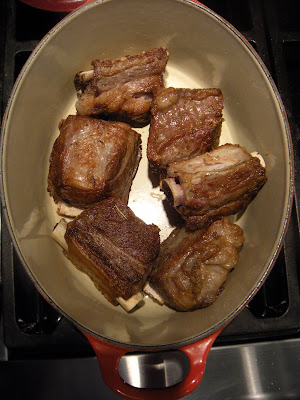 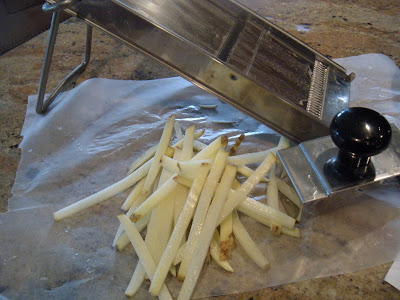 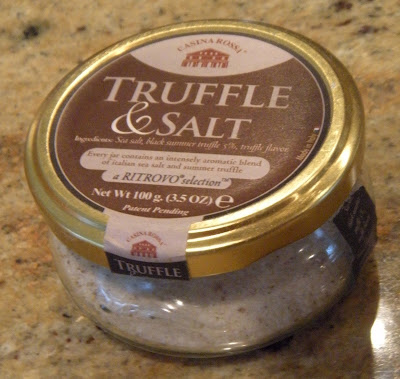 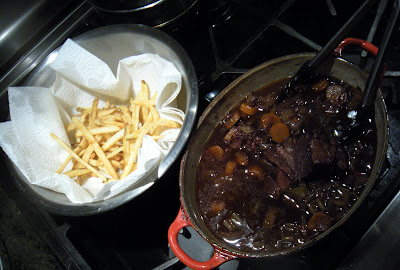 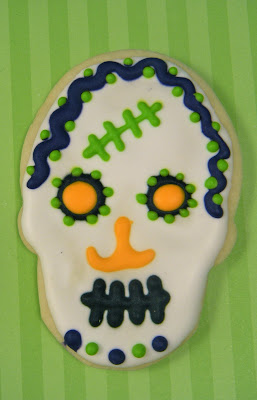 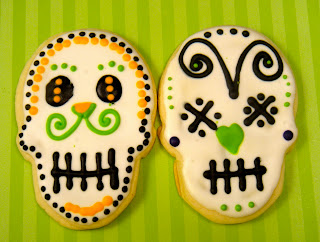 So Halloween is just a memory, and I have no candy to rummage through.  No Take 5 Bars, no Hundred Thousand Dollar Bars, no Dark Milky Ways.  Oh well, my new blue jeans will be thankful.  So growing up we had this day off school, All Saints Day.  It is the day to remember the loved ones who have passed.  In the Mexican culture, it is Dia de los Muertos, Day of the Dead.  This day, you tap people on the shoulder to remind them that dying is a part of living.  All a little creepier than Halloween if you ask me.  But while I was baking Halloween cookies, I decided to do a few skulls.  I had a limited amount of colors made for the cookies and just went with them.  I would have loved to add some blue and red and really went to town, but I am decorating cookies between volleyball tournaments and work.  So, here we go, I guess we officially kick off the holiday season.  Time to make the Thanksgiving menu and order Christmas cards....what are you waiting for? 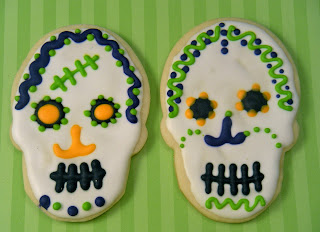 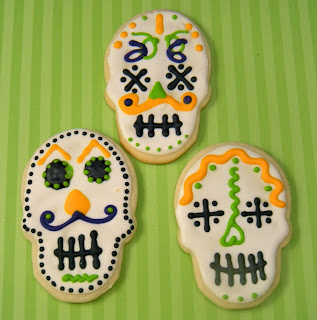