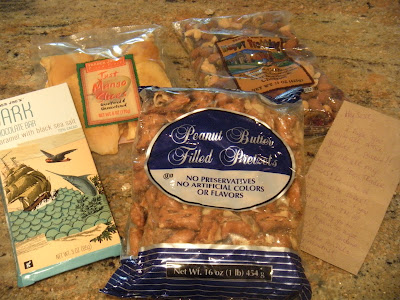 How fun is this idea? The brainchild of Lindsay at The Lean Green Bean.   Foodies, from all over,  are randomly matched and send a $15 foodie box to someone.  Then, we all blog about our box on the same day.  I thought this would be a fun little thing to do every month.  Make new friends all over, try different, regional things, and send a little Memphis to someone!  My box was sent to me by Kristina from Upstate New York.  She sent me Trader Joe's treats. Peanut butter filled pretzel nuggets, an amazing trail mix with pistachios, dark chocolate, cherries, definitely above and beyond the average trail mix, and a great mix to take on my trips!  Also some dried mago slices which I have never had before.  They remind me of a fruit roll up with out all the sugar and colors added, and finally a little guilty pleasure in a chocolate and sea salt caramel bar...um, yes.  Thanks Kristina!  And her sweet not was written on a pice of the Trader Joe's Bag...I love that!!! 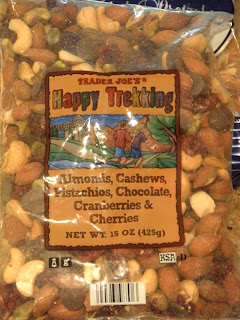 I sent off my box of Memphis to Julia, a Massage Therapist with a great and very informative blog.  I hope she loves it! 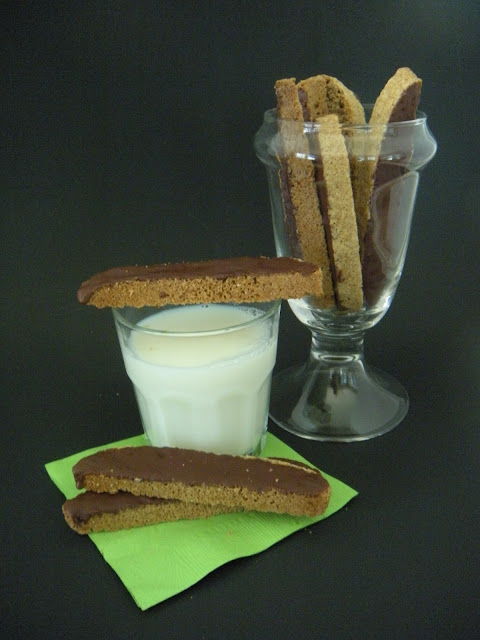 Yep, I really mean it.  I have blogged a few biscotti recipes, and made many, many more.  The original Aunt Molly, a Lo-Fat Chocolate version, yummy White Chocolate and Ginger, and the ones I made for the Bloggable Wine Guy.  And my mom's famous Doctor Biscotti.  They are all "good".  Aunt Molly made the best, and sadly even making her recipe, in her handwriting, they don't don't hit the nostalgia button.  I know what I remember, and I have yet to duplicate it.  Until....  It was a typical Friday night in June.  There were hundreds of baseball games happening, and the most prolific umpire of all, and his son were out officiating.  The princess was busy with her social calendar and I, alone,  headed to the kitchen.  I had gone through a pile of magazines headed for the trash and tore out the things I thought I should try.  And there in all it's wintery goodness, snowflake background and all, was a biscotti recipe.  Why not.  It is hands down, the very, very best biscotti ever.  Period.  End of story. 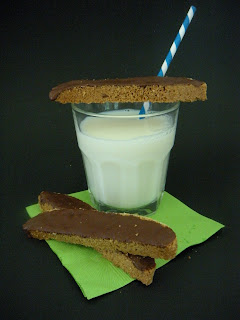 Needless to say, I didn't follow the recipe from Cooking Light November 2007,  exactly, but here's how it went down.  Now remember, this is my biscotti.  It may not be the one you love, but my family is sold and so am I!

Preheat oven to 350.  Combine flour, baking soda and salt in a bowl.   Whisk to combine.  Beat butter and sugar in a separate bowl with a mixer, until blended.  Add eggs and anise, beat well.  Add flour mixture, mix until blended.  Turn onto lightly floured surface and knead.  Shape into long log.  Bake on greased sheet or Silpat covered sheet.  Bake about 40 minutes.  Cool on rack and reduce oven temp to 300.  Slice and place cut side down and bake again for about 10 minutes on each side.  Cool completely on racks. 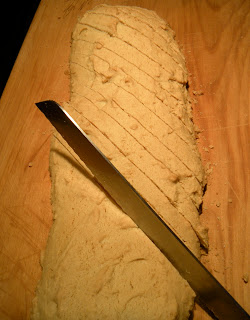 Heat chocolate in double boiler or in micro until smooth.  Dip or spread onto cookies, just on one side.  Allow to harden before storing in airtight container in cool place.  Make an espresso and call me over for 3 o'clock coffee!  Makes about 2 dozen. 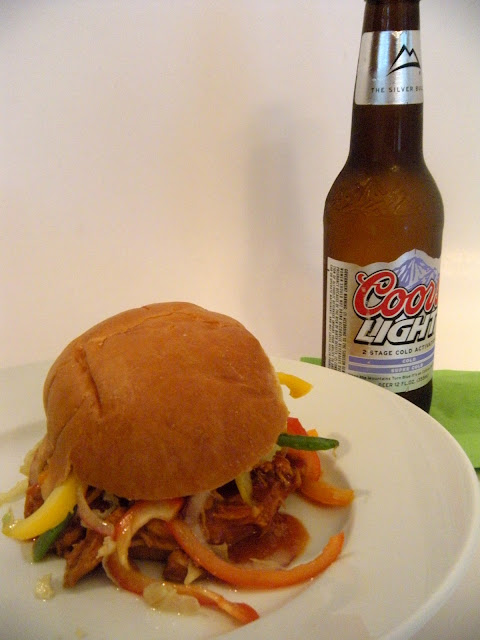 So, let's start with Lisa.  She has a blog called Parsley, Sage, Line Drives and Desserts.  I have been a fan for a long time.  She is a great writer, involved in some online blogger groups that I am or have been in, and her posts never disappoint.  She really is amazing.  Currently, she is weaving a story into her posts on amazing food.  Not just any story, but Bad Boy First Love.  We, her readers, are anxiously awaiting Part 15.  She has a book in this, really.  But be warned, you can't just jump in.  But, she is so thoughtful, she has links to all the previous chapters.  Pour a big coffee, you are gonna love this!

Bad Boy First Love or BBFL as we groupies know it as,  Part 14B featured a recipe for Pulled Honey Sesame Chicken Sliders With Rainbow Slaw.  I knew I had to make these.  I did a cursory inventory of ingredients,  and decided I had what I needed.  Well, sort of.  And since we all know I am bad at measuring and following directions, I suggest you go to her recipe. I did it with limited honey, and I pretty much used 10X the amount of chili paste.  I had Napa cabbage, not red, which was fine, just not as pretty.  And let me tell you, Lisa's food is soooo pretty.  Rainbows of food keep appearing.  Her slaw is one example, but her Nicoise Salad Rainbow is a showstopper!

I put it all together pretty quick, and cranked up the slow cooker.  I really hate the slow cooker, but I had a day of cookie decorating ahead, and I was not in the mood for carry out.  When my son returned from work that afternoon, he was wondering about dinner plans.  I sent him to sniff the goodness in the cooker, and he was not happy.

He thinks the only thing you make in those things is pot roast, and he really dislikes pot roast.  Well, I made a believer out of him, and Mr. Preppy, and Christina.  In fact, they all agreed to try it with the slaw and agreed again it was amazing!

Here in the South, a pulled pork BBQ sandwich is served with slaw on top. The icky slaw, mayo, celery seed, just not good.  But Asian Rainbow Slaw?  Now, that's good!  Also, Lisa suggests in her post that using frozen chicken helps make the chicken more shreddable (apparently a real word as spell check did not step in!).  I absolutely concur.  I make chicken fajitas that way.  Frozen breasts, onions, peppers and seasoning in a Le Crueset dutch oven.  An hour or so later, that chicken shreds beautifully.  I know, fajitas should be grilled, but it is my "I have a million other things to do"  dinner!  So, what are you waiting for?  Get in there and cook!
Posted by Susie at 5:38 AM 0 comments 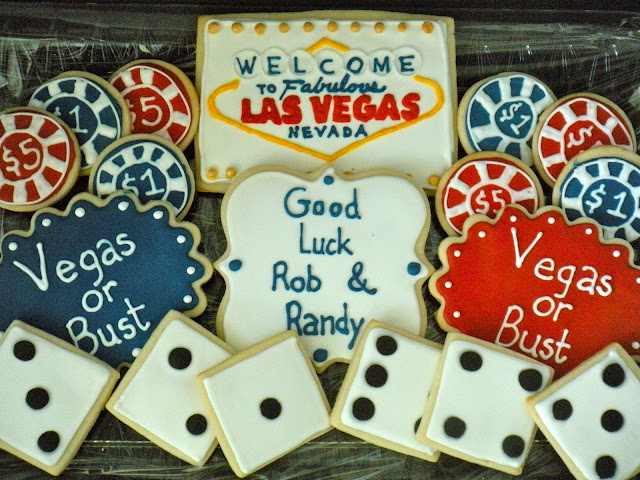 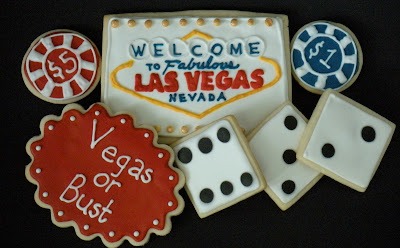 This fall, I will hit my 15 year anniversary at Williams Sonoma.  I have worked there longer than a lot of marriages last!  Needless to say, I have seen a fair number of personnel changes over the years, starting with the manager who hired me and then, poof!  She disappeared.  Honest.  About 8 years ago, I had a manager Rob, who I really loved working for.  He moved on to bigger and better things, but we have stayed in touch over the years.  This last Christmas his partner Randy worked as seasonal in the store, and we loved him as well!  Last week, the guys decided to head West, Las Vegas.  They have opportunity there, family, and I can tell they are pretty excited about the adventure.  So I decided I could take them a little going away gift, or I could make them cookies!  Viva Las Vegas!  Good luck Rob and Randy! 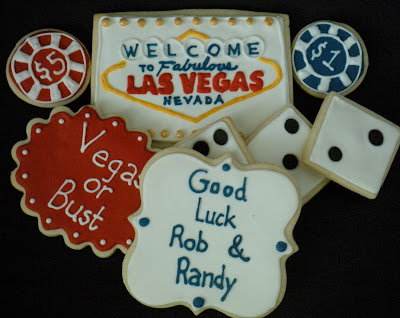 My friend Barb, that I made these cookies for, lived on a farm.  An honest to God, all American farm, and spending the night there, when we were in grade school, was the bomb.  We got to feed the baby calves with these giant baby bottles filled with formula, we would play for hours in the hayloft.  There were tractors, and gardens, chicken coops,  and the meals were shared around a huge table in the kitchen.  Like most farmers, everyone was up early, and the main meal was midday. Barb's grandparents also lived on the farm in their own house, and there was always a lot of people around.  Plus, she had the cutest cousins!  Once a year our entire class would get to go to the farm and have a hayride.  Another right of passage growing up in Iowa.  One of my favorite cookie recipes is from her kitchen. I promise to make and post on a non-humid day.  Chocolate Dotted Peppermint Kisses, who would have thought the meringue cookie market would be what it is!  That is the second "big thing" I have been making my whole life that has gone mainstream.  The other?  Biscotti!  Oh well. 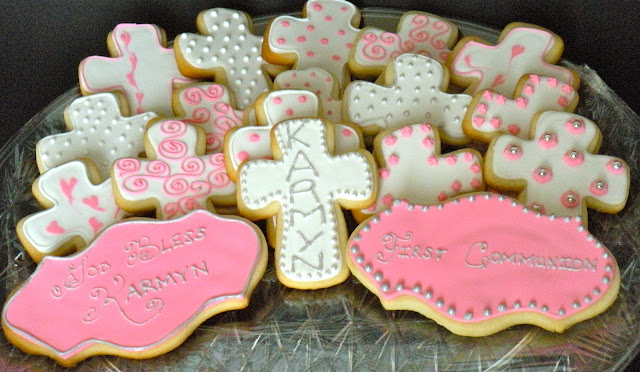 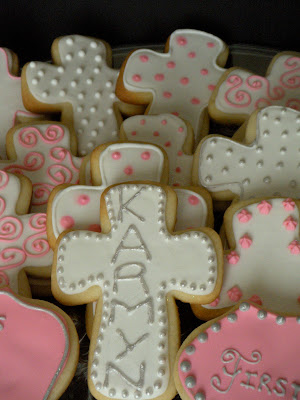 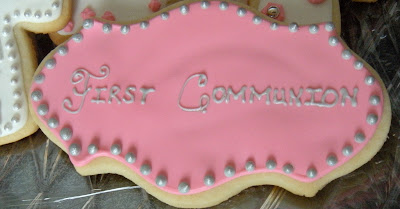 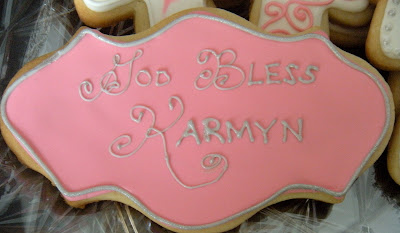 How serendipitous that this dear friend from childhood, who shared that day with me, asked me to make cookies for her daughter's First Communion.  I am honored.  I brought cookies to a grade school reunion we had last summer, so Karmyn (her daughter) got a taste of a Sweetie Petitti, and I am thrilled to be a small part of this special day.

We made our First Communion in the spring of 1971 at St. Boniface church in Clinton, Iowa.  I remember the dotted Swiss dress my mom made me, and I still have my veil. As a matter of fact, I wore it to the Royal Wedding Party my book club had.   This is where I would have inserted the picture from that day,  if I could get my hands on it!  It is packed...somewhere!  A photo of my life long friends, no matter how many miles may separate us.  I love these girls so much.

Her son is also graduating from middle school, so he gets cookies too.  Off to high school.  Wow, such a huge milestone.  I think those are the fastest 4 years of childhood! 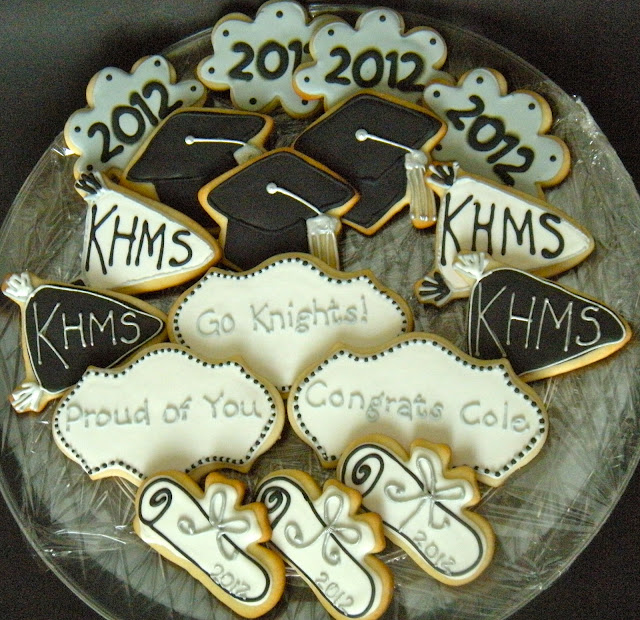 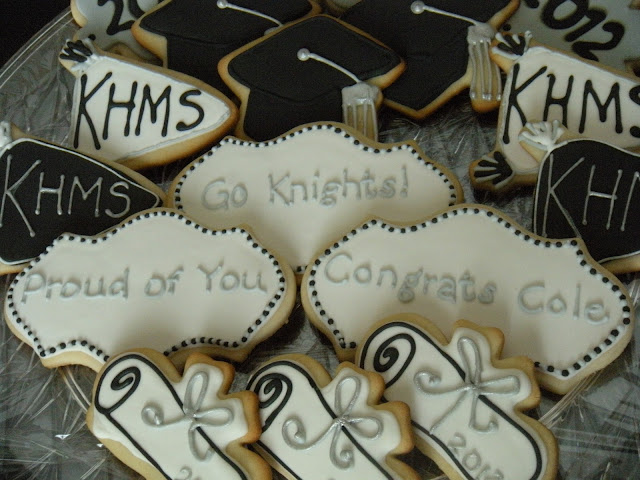 Barb and I graduated from 8th grade together as well.  I had moved away 2 months earlier, but they were happy to let me be a part of graduation after all the years my family spent in that parish.  With just under 20 kids in our class, we were all very good friends.  We all lived in proximity of the school and church, our parents were friends and our siblings were all friends.  To this day, I can go to Clinton, IA and someone knows my family.  With 5 kids, we were one of the smaller Catholic families in town, but we sure left a mark there!  So,  What are you waiting for?  Get in there and bake!
Posted by Susie at 4:52 PM 0 comments 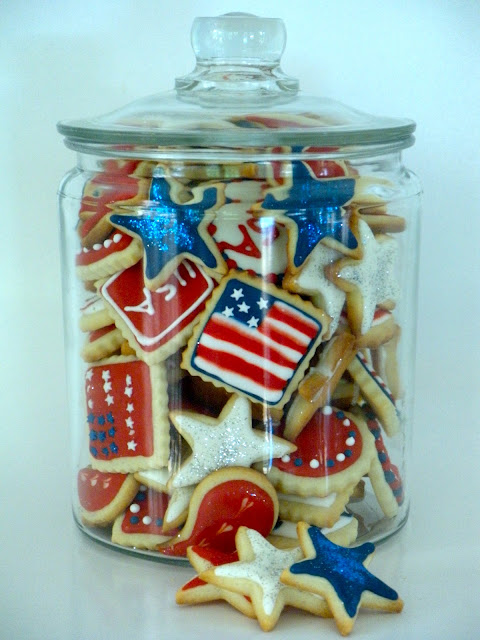 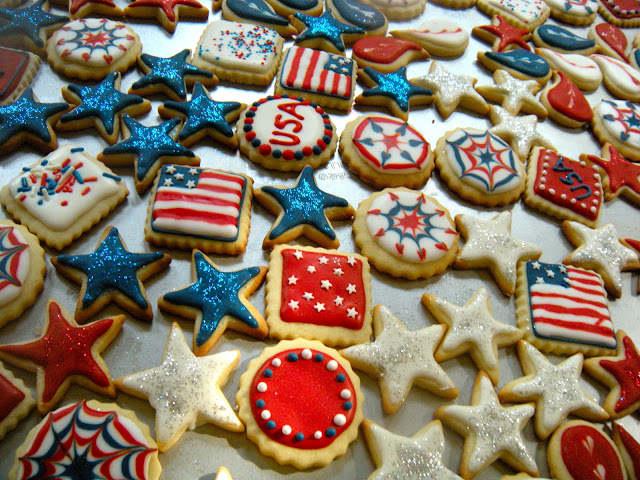 I made mini cookies for the throngs of teenagers that will be trekking through my house this week.  Not only is it the 4th, but it is Birth Week!  Christina and I celebrate our birthdays on Friday.  So, I whipped up the red, white and blue cookies, but I am off cookie duty so I can enjoy the splashing, the laughter, the fireworks and the friends!  Have a safe holiday! 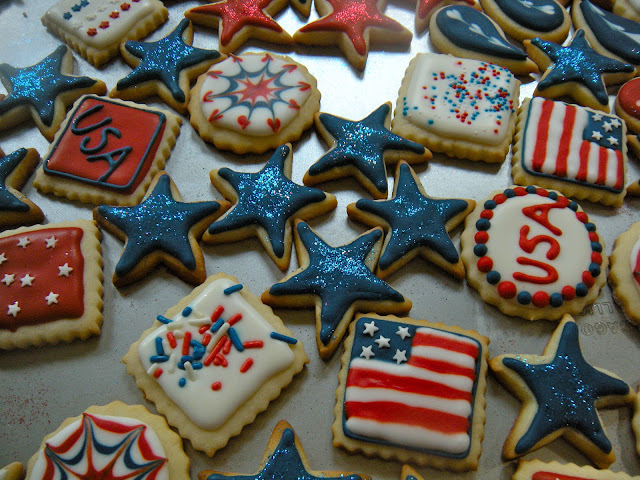 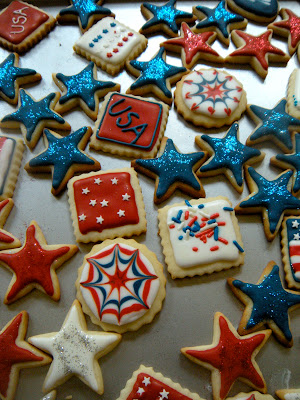