I have just returned from a whirlwind, 4 day trip to California, Los Angeles area. I affectionately call it LA LA land because it is chock full of loony people. They appeared on Sunday, so stay tuned.
I arrived late on Thursday evening. So Friday we got up early to fit as much in as possible. A quick coffee, the LA Times (love that paper) and my sister Lori and I hiked Temescal Canyon. The hike was about 1 1/2 hours to Skull Rock and back. It was exhilarating and exhausting. I would have loved some photos for the blog, but you don't want to carry an extra ounce up that mountain!
We returned to Santa Monica and cleaned up for the book signing at Williams Sonoma. Ina Garten!
We thought we were planning ahead, and arrived an hour early. The line was already 3 blocks long so we jumped in with our books. The guy ahead of us had a bouquet of orange roses for Ina, her favorite. Sort of creepy that he knew that! Behind us to start were 2 young moms and their babies. They didn't plan the day well, no strollers and they didn't pre-buy the book. About 45 minutes into the queue, Williams Sonoma ran out of books so they left, even though these very nice sisters in line were willing to sell them each one of theirs. Which brings me to the real blog of the day.
Dominique and Yvette, (I sure hope I spelled those right) were the sisters in line behind us after the the babies left. We chatted for the next 45 minutes. We talked about recipes, families, Ina of course, and Thanksgiving. One of them told a funny story I can't get over. It was a dinner party she was invited to by a friend who really doesn't cook. The assortment of food was odd to her (a good cook labors over what food goes with what!), and she said the hostess was so happy when it was over because her freezer was now empty! It was a leftover party!
Leftovers! Seriously, we decided everyone hates their own leftovers, and frozen leftovers are the worst! So what would compel anyone to think that their friends wanted to eat theirs?
The first thing I did when we returned to Lori's was open the freezer to determine what would be served at her leftover party. Pretty slim pickings. Soup. About 2 bowls total. A pretty boring affair and it wouldn't really open up much space. That IS the real reason behind this sort of party right?
Now I'm home, and I have 3 freezers. So I had a "comin'-to-Jesus" with my own leftovers. First let me explain I feel guilty throwing food away. But throwing away ice covered broth I made last Thanksgiving from the turkey carcass isn't that hard. And yes, I have 4 enormous Ziplocs of 12 month old turkey broth, yum, (now there's a party waiting to happen). Trash. 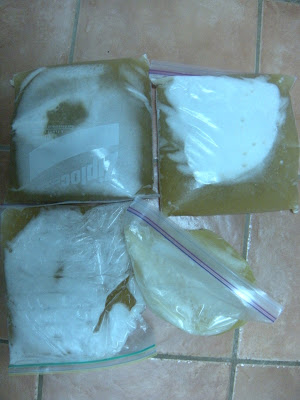 There is a ragu I made from some rib eyes. Trash.
There was some chicken pesto pasta...what the heck, reheated and served that for dinner last night, I was tired from flying.
And yes, there are things I can't identify. Soups, pastas, some sort of enchiladas, maybe pulled pork....all in the trash.
I have come to the conclusion that I simply make too much. I wouldn't think of just throwing out the leftovers after dinner, but I feel no guilt throwing out the frozen remains months later. And what about those bread ends? You know the heels of a loaf? I have a bag FULL of them. I'm the only person in my house who will eat them. Sometimes I'll pack Christina a sandwich and flip it over so she doesn't know...until she bites it. So how many bread heels can I possibly eat? Why do I save this stuff? Croutons? Great idea, but I seem to just buy bread and make croutons. And one cooked bratwurst. It's pathetic and couldn't taste good at all. But I saved it! I have got to get a little freezer therapy! 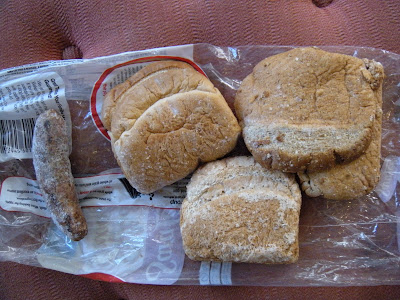 Now remember, when you open the freezer and look for yourself, the Lean Cuisines and that bag of frozen shrimp don't count. We're talking leftovers. "Already been served" kind of food. I am over it. I am no longer going to store up. I am making what we will eat, I am not buying freezer bags. I think I may actually be able to unplug a fridge after this. There's an extra $10 a month of electricity to put toward that fresh food! Thanks girls for the great story and the nudge to clean up my act!
You can see it is clean! Vodka and glasses, ice cream freezers, and some baked goods I made for Thanksgiving week. But no leftover dinner from April! 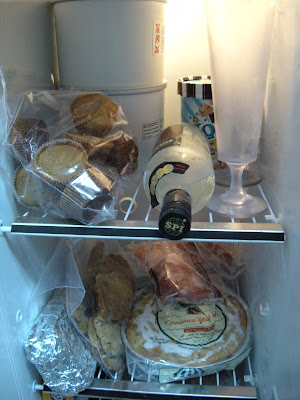 Next I will blog the killer salmon I made for dinner that night, and how I came upon the recipe. For now, I need to peruse my new Ina book and make a grocery list for Italian Wedding Soup, just enough for one meal! And here's Lori and I with Ina. She was very charming, engaged everyone, and she can cook! Bet her freezer is void of leftovers! 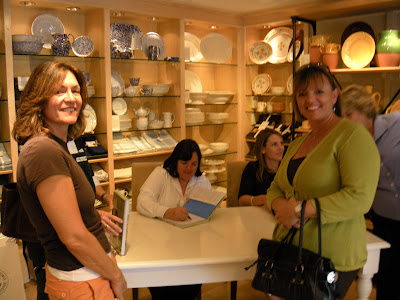