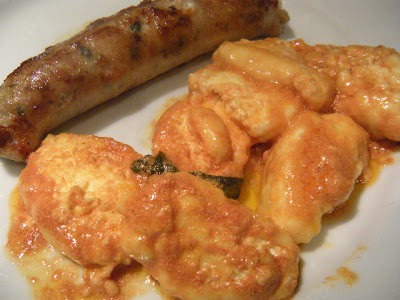 As many of you know, I am a proud member of the Daring Bakers. This month is the first challenge of the Daring Cooks. Same concept, a recipe is revealed in a member's only forum, and then we all cook it and reveal our blogs on the same day. I was delighted to join, and happy to make something that didn't have sugar as its primary ingredient. So here is the first reveal. Ricotta Gnocchi.
We have chosen a recipe from the stunning cookbook by Judy Rodgers, named after her restaurant, The Zuni Café Cookbook.
On the surface, this is a very straightforward recipe. The challenge is in the forming and handling of the gnocchi. What you do with the recipe, in terms of variations, is up to you.
So there's the business part, generally there is a blog checker looking for the tag lines, and if you are a member and don't participate 2 months in a row, you're fired!
So here's the deal with my gnocchi. I made and blogged the ricotta a week or so ago. It was delicious and I will be making this often. As Mother's Day approached, I was pretty sure no one was cooking for me, so I decided this would be a good time to make the gnocchi. 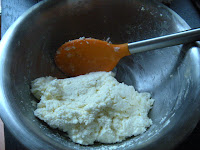 I actually prepared the gnocchi about 4 days in advance and froze them as was directed in the recipe. The dough is very fragile, and I tested it before I froze it and the cooked gnocchi without sauce was great. I could really taste the fresh nutmeg. Freezing it just for a few days must have taken a little moisture out because they were a little crumbly. I halved the recipe (thank goodness) since I was cooking for 3, and cooked them in 3 batches. The first batch was much better than the last. I boiled them as directed and cooked them in a sauce I made with browned sage butter, fat free half and half and a little tomato paste. The verdict? I love gnocchi, but not these and not mine. I totally stink at this. My gnocchi were seriously deformed, and of course I am comparing them to the gnocchi I would get at a restaurant likely made with potato or flour. 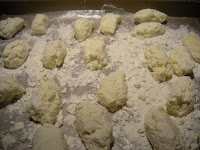 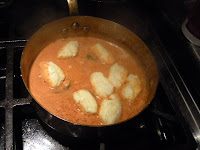 When I dropped them in the sauce they were so fragile, and by the last batch it was if they were almost melting into the sauce. Were they not boiled long enough? Was the butter sauce not hot enough? I really have no idea. My conclusion is, been there, done that. Not something I will attempt again. My family was not thrilled. The sauce was delicious and would taste great on whole wheat pasta with some chicken sausage in it. But I think I'll leave the gnocchi for my Italian restaurant adventures. Now I can really appreciate the work that goes into it!
As an aside, there were 2 products that really made the sauce and finished product shine. Tomato paste in a tube is super concentrated, tastes incredible and is the ultimate in convenience. It is also so easy to regulate the amount. This is what I used in my browned sage butter. Although I did use fresh grated nutmeg in my gnocchi, even with the sauce there wasn't a big flavor punch. A dusting with salt with truffles was superb. This trendy little salt has itty bitty chunks of truffles and is great on simple pastas. It made this ho-hum dish much more palatable for my family. 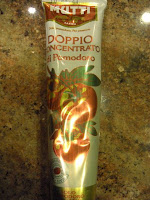 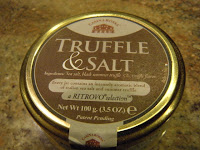 I am so excited about this month's Daring Baker's Challenge, which will be a real challenge. But that's really the concept behind the groups. Whether baking or cooking, they want us to step outside our comfort zone, step up to a challenge. I love that, I don't have to love what we make, but I love a kitchen adventure. Watch for the baker's reveal in a week or so!
Posted by Susie at 8:24 AM