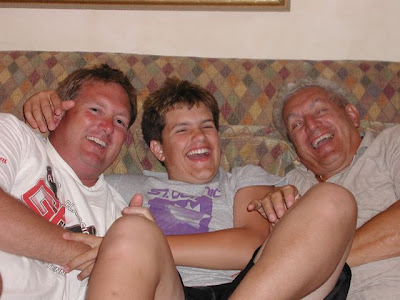 Yes, Father's Day has passed, but my dad is coming back through Memphis and we decided to celebrate again, and this blog is for him. We had a mini celebration for Scott, which also happened to be Nic's last day before Basic Training began. So no one gets their own day with everyone present and accounted for, but that's okay, life sometimes gets in the way. The photo above is one of my favorites of my men. My dad, Scott and Nic, all laughing about something, I wish I knew what it was. But how wonderful that this moment is captured. How often do we really get a good belly laugh?

Because Father's Day was also Nic's last day, he had a special request: apple pie. I decided that was the perfect dessert for many reasons. You see apple pie isn't just a pie, it is a memory, a story, a piece of my heritage. Many of you read my Mother's Day tribute, this is the Father's Day tribute. Scott and Nic ate one pie on their day, but the blog tribute comes with a pie for my dad that I made and froze just like he used to do for many summers. Happy Father's Day Dad!

Around 1909, Vito Petitti, my Grandfather, was 14 years old and he boarded a ship in Naples, Italy. He was unaccompanied by an adult, and was following a journey his own father had made just a year or so earlier. Sadly, his father was dead, he had been murdered in Cleveland, Ohio. He had made the same passage to America to make a living and send for the family. My Grandfather wasn't willing to let his father's dream of a new life in America die with him. So, as a very young man ( almost a child) he made his passage to New York City. The ship arrived at Ellis Island, where my Grandfather was processed with thousands of immigrants. I am amazed at the information I could find online at Ellis Island and we have searched pages of manifests to determine his exact sailing dates as there were a large number of immigrants from his small town of Faeto, and there are an astounding number of Petittis. Strange, because in my life I can only think of 3 Petitti that I know or have heard of that I wasn't directly related to.

He told the story of entering New York to my father. As they arrived at Ellis Island, he was amazed at his new country. There were volunteers all about and they were passing out a small sausage and a small hand pie to the new arrivals. My Grandfather's village in Italy is famous for its pork products, so the sausage was not that interesting, but the pie was unlike anything he had ever seen so he ate that first. How "American" that his first food on this soil was apple pie. It was love at first bite. He quickly traded his sausage with another immigrant for another of those apple pies. So began the family tradition.

Many years later my own father, Pasquale Vito Petitti was born in Chicago. His mother was also an immigrant from the same Italian village. My Grandfather owned a grocery in Chicago called North Avenue Food Mart. It was located at 2654 North Avenue in Chicago and he also owned a few meat markets on Taylor or Palina and Cicero and Lake St. This photo is in the meat market, Grandpa and Uncle Joe. You can't see the sign well, but it reads, "Don't ask for credit". Smart men! 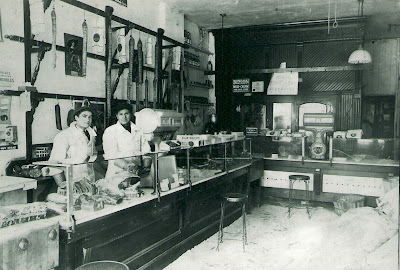 In 1941 my Grandfather decided to leave the city and set up a farm. He held on to one of the markets, but established the biggest dairy farm in Kane Co. Illinois. The farm and the grocery are where my dad has his childhood memories. I love looking at the old photos of the grocery store with its neat stacks of cans and hand lettered signs, and the meat market with the men in their white aprons. I have the the box of stamps they used to make the signs with the prices on them. Truly an era gone by.

But back to the pie. My Grandpa got more than cows when he moved out to the country. He had gardens and chickens and an orchard, full of apples. Apple pie would become a tradition alongside Sunday gravy and home made wine. In my own childhood years we too had apple trees. Not an orchard, but trees. Now, no offense to you folks in New York or Washington, but in the midwest we don't grow apples with names. They are apple trees plain and simple. And the apples are green and tart and small. You want to get them before the worms do, and you pay the little kids to pick them up off the ground before they rot to a mushy brown and the bees come in. But they do make the best pie! Green apples tend to be a little drier so they really compliment the cinnamon sugar combination, and we make ours with a crumble on top. Yum, as the baker I am privileged to eat a little hunk of that butter, sugar, flour on top as soon as the pie emerges from the oven. My dad would spend an entire summer day making pies. First the crust, made with lard and Crisco, I said they were good, not good for you. And then the endless peeling and slicing. He would make a dozen pies at a time and put them in the freezer. What a treat on a chilly winter day to eat from your own backyard. 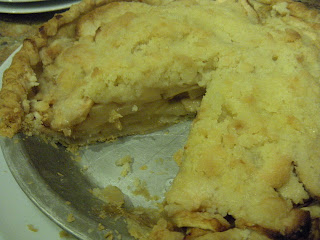 So Happy Father's Day Dad. Really, it's always father's day. This pie is a great tradition and we are all so proud of the great heritage from which we all came. Bon Appetit!

One pie crust
A large pile of tart apples
Peel, core and slice the apples. Place them in a large bowl and toss with ½ cup sugar and 1t of cinnamon. Place in the pie shell. In bowl mix ¾ cup flour, ½ cup sugar and 6T butter. Using a pastry blender or fingers, incorporate the ingredients until they are pea sized. Place on top of the apples and bake at 400° for about 45 minutes. The sugar can be lessened depending on the sweetness of your apples. Too much sugar with sweet apples makes for a disaster! Happy Baking...
Posted by Susie at 12:32 PM