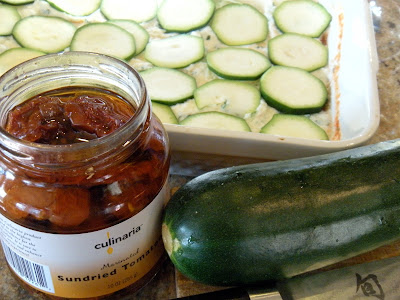 When I really put pen to paper, it is obvious we eat a lot of vegetarian meals. And, truth be told, I don't miss meat, although I could never give up that occasional ribeye on the grill. When I was in Florida visiting my parents, an old high school friend and her husband came for dinner. I knew she wasn't a meat eater, but she's a good Italian girl (like me) so I decided on spinach lasagna. It worked out great because my mom has vegetarian friends and she is always pondering what to cook for them that is still satisfying for the meat-eating, hunter/fisherman dad of mine. So I made two pans and put one in the freezer for her.

Here we are a month later and in the Lenten season. As a Catholic we don't eat meat on Ash Wednesday or any Friday during Lent. All over town the Friday Night Fish Fry will be on, but this spinach lasagna is a lot healthier and frankly, way more delicious. Of course you could add some crumbled turkey or chicken Italian sausage and it would satisfy any meat eater!

This is the first time I have used to no boil lasagna noodles, and I thought they were so easy and delicious. We don't eat lasagna more than one or two times a year, but I will definitely use these short cut noodles. I usually buy my marinara sauce (okay, so maybe I am not that good of an Italian girl). Fresh Market carries a marinara in a carton that I love. No corn syrup, not loaded with preservatives. I have used both skim and whole milk ricotta. The whole milk tastes better and interestingly enough, the nutrition label on both were identical. Not sure how or why, but because we only eat it a few times a year, I am going with the flavor of whole milk. I have made this 2 ways. One time with the spinach separate as its own layer, and the best version which follows, with the spinach and ricotta mixed. 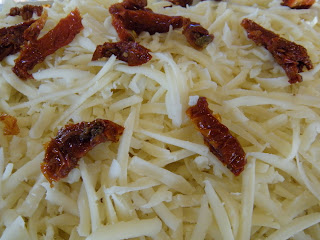 In a 9X13, dribble a little marinara on the bottom and smear it around. Lay out a layer of noodles. Dribble a little more marinara. In a bowl mix the ricotta and spinach and add seasonings. I use garlic salt with parsley, fresh parsley, and Italian herbs. Layer half of the ricotta mixture on noodles. Next layer is sliced zucchini. Scatter about 4 sliced sun dried tomatoes. A little Marinara and another layer of noodles. Then the rest of the spinach and ricotta, zucchini and a little marinara. Last layer of noodles, marinara and mozzarella to seal it all in. Top with a few slices of sun dried tomatoes.

You can freeze it at this point, well covered. Otherwise preheat oven to 375°. I poke toothpicks around the edge of the lasagna and tent with foil. If the foil touches the mozzarella it will take it all off when you uncover it. I bake it for about 20 minutes and then uncover for another 20 minutes. When it is all bubbly, it's done. Allow it to rest for about 15 minutes so it slices clean. Buno Appetito! 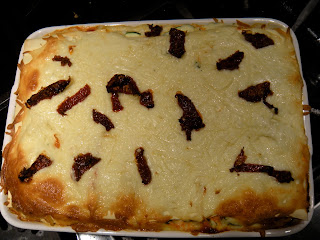