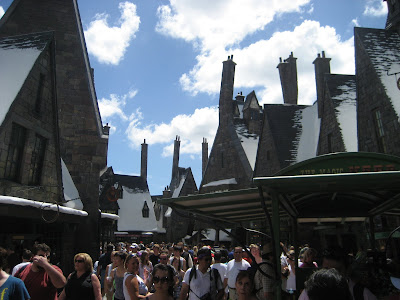 Hogsmeade is the village and is charming with its snow capped roofs, crooked chimneys and charming storefronts. But don't be fooled. Most of the storefronts are false, and according to one worker the buildings are used for storage. We were there just a week after opening and it was shoulder to shoulder Muggles. Terribly crowded, as truly the lines are far worse to get in the stores, Olivander's and to get a Butterbeer than most of the rides! But the architecture, the costumes and the sound track that plays non stop really immerse you in Harry's world. 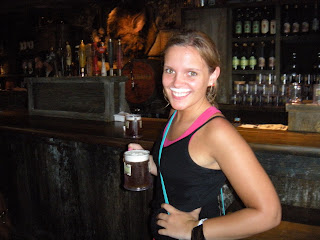 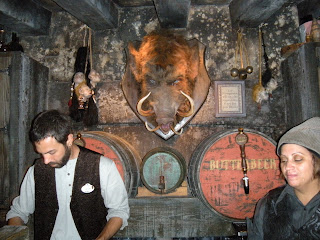 On the right side of the street the first operational building is Hogs Head Pub and the Three Broomsticks Tavern. We entered the pub from the back alley to enjoy a Butterbeer. Let's just say it is really sweet, foamy and interesting. Pricey, 2 in the souvenir cups will set you back $21. The Three Broomsticks is a dining establishment with an English flair. The line at lunch was hours long. We went to another part of the park for an air conditioned lunch. Then comes Honeydukes Candy and Zonkos Joke Shop. The selection of candy was limited with many of the book's inventions sold out. We bought chocolate frogs for $10 each and they were that cheap chocolate coating type chocolate, but they do have a trading card. The shops are connected and we were looking specifically for a Pygmy Puff. The attendant was a little snide when he scoffed at me and said, "Ha, they sold out on the first day". They didn't have much there. 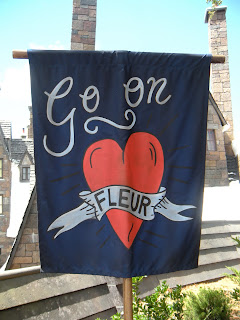 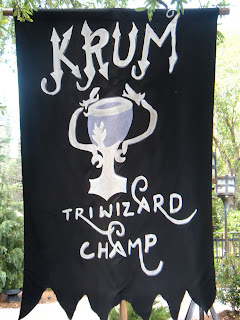 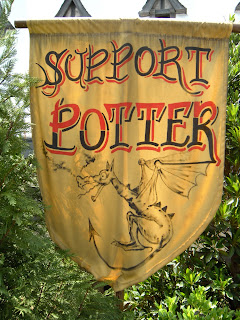 We cross the street now to the Hogwart's Express. It is a stationary engine with the platform and a great photo op. The entrance to the Dragon Challenge comes next. This is from the Tri Wizard Tournament in The Goblet of Fire. The path for this line is lined with banners for Harry, Krum and Fleur. Great views of Hogwarts and Hogsmeade are found, as is the Weasley's car where it crashed and also the backside of Hagrid's hut. The ride itself is 2 roller coasters. The first is the Chinese Fireball Dragon and the other is an Hungarian Horntail. They are intertwined, but are 2 different experiences. 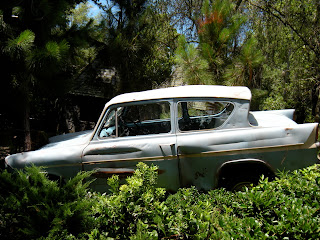 The next place to visit is Dervish and Banges. We waited in line about 20 minutes to get in, and it was crowded. This part of the store carries quidditch stuff like shirts, quaffles, snitches and broomsticks. There are also robes and stuff from the 4 Hogwarts houses (low on Gryffindor stuff). The store is connected to the Owl Post which is where the problem lies. The description talks about benches and owls rustling, but one wall is nothing but wands, and from the other side comes about 25 people at a time from the show at Olivander's. It was so crowded in these stores it was impossible to shop. They are about the size of my kitchen. I missed the post office here to get the Hogwarts postmark, which bummed me out.

Olivander's is the next shop and the line was a mile long. From what I hear, they take about 25 guests at a time and the clerk chooses a guest and a wand "chooses them". He does his little schtick and then all those people go into the Owl Post and buy wands and stuff. The worst crowds of the whole experience. I guess everyone wants a wand!

We end in a little common outdoor area. People seem to naturally gather here, and at various times there are shows. One featuring Hogwarts students and singing frogs and the other featuring the students from the visiting schools of Fleur and Krum. They sing and put on a short show and offer photo ops when it's over. I made my companions stick around until dusk, because I knew it would be beautiful. It dd not disappoint. I can hardly wait to return when the temperature is in the 70s and the crowds are minimal! 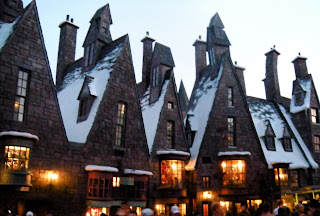 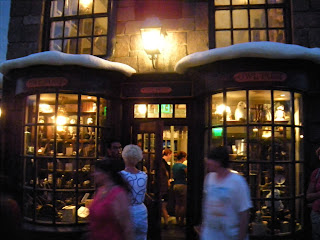 Am awesome experience, a must for any Potter fan. There isn't much for the non roller coaster crowd as far as rides, and the shopping is limited. If Universal were smart they would demolish the Jurassic Park section and the carnival game midway and expand on Harry's fantastic world. It is no Disney, but it could sure give them a run for their money!
Posted by Susie at 11:40 AM