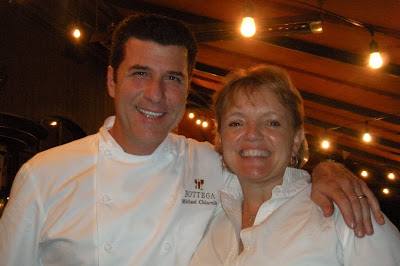 So after the first two days of biking, drinking and eating, I called "Uncle". The following morning we headed to Sonoma square for breakfast at Basque Boulangerie. It was only okay, Model Bakery is the standard by which all bakeries in Wine Country are compared. So we then headed to Corner Stone Sonoma. This is an intriguing place. There are various gardens set up with different artists and landscape artists having put their vision in a confined space. 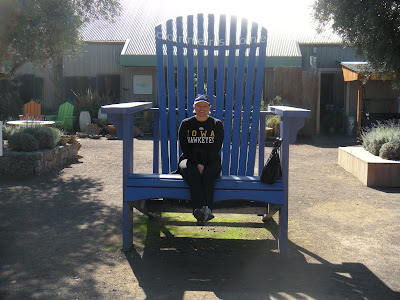 Like most art, some of it was bizarre, but one that really stood out was these silver clouds hanging from trees. The clouds were made from chicken wire and really looked like storm clouds. And hanging from the bottom of these clouds were hundreds of crystal baubles. They caught the sun and sparkled in great contrast to the storm clouds. I was intrigued. There were amazing shops full of architectural pieces, garden pieces, lots of artsy objects that were different and distinct. 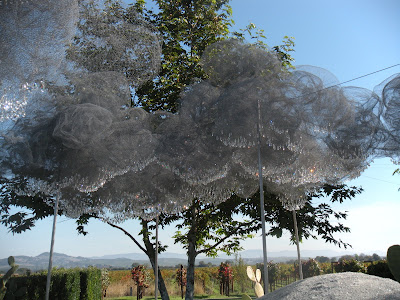 There was a cafe, but since we had breakfast and were looking forward to an amazing dinner, we passed. But they were stoking the fire and it smelled delicious. Of course there is a wine bar but we passed. I know. You have every right to be disappointed in me.

We headed back to the hotel, had a little nap, and awoke refreshed, and amazingly, thirsty! We had a few hours before dinner, so we headed to Yountville for some strolling. First stop was Bouchon Bakery. I was so disappointed to find they had a small fire and were not up and running at full capacity. There were no French pastries, macarons, breads etc. I was bummed. But we did buy some caramel corn and toffee (Scott's weaknesses) and a crazy thing called a Thingamajig. I can't remember for sure though. It was a Rice Crispy treat with caramel on top, bathed in chocolate and adorned with a little fleur de sel. Delicious! And no, we did not eat all this before dinner! We had to have a little moment of reflection at the great Thomas Keller establishments, Bouchon, Ad Hoc and French Laundry. Gorgeous settings and all terribly unpretentious. At least until the check comes. I dream of dinner at French Laundry, but Scott would never enjoy it to the degree I would. It is also nearly impossible to get a reservation, unless you carry an American Express Black Card. If you need someone to share this experience, give me a call, I am great dinner company!

There is a small shopping center called the V, and we strolled in and out of the shops, there is also a beautiful wine store with tastings and an impressive assortment of wines. Not just the oddball ones, and we'll talk about that later. Behind this little mall is the entrance to Bottega and the store Napa Style. Both are the brainchild of Michael Chiarello. Napa Style was first. I have been ogling over their catalogs for a long while, and in person it is full of charm. 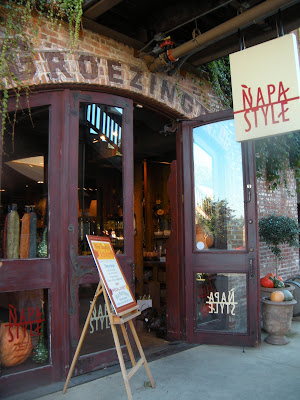 It is exactly the type of store someone like me falls for. It is truly designed for the entertainer who loves a home with personality and charm. I could gush about so many things there, but you should look at the website yourself. You know I have been working in a similar type of retail establishment for 14 years, but I cannot lie. This store has so much personality. There is also a wine tasting bar, which was fortuitous. So tasted the selections in Chef Chiarellos winery. We loved a lot of them, and chose a few to take home. We also discovered if you bought his wine there and took it to his restaurant they would waive corkage. So that was a win, win. We did some serious shopping here and had it all sent home for us. I also made my Christmas list. The next day, Scott wanted to go back...what? Yep, he loved it as much as I did!

Then to the HIGHLIGHT of the entire trip. First let me tell you about me. I am a blogger, love to cook and bake. I am also addicted to reality TV. I TiVo every Top Chef, including Just Desserts and Masters, Hell's Kitchen, and a few others. I also watch all the Top Chef reruns. I love it. Chef Chiarello of Bottega had a show called NapaStyle on Fine Living which I am pretty sure I have seen them all. He also has a show on The Cooking Channel called Easy Entertaining. This what I love about his vision. It isn't food that blows people away with its crazy components or plating. It is food that brings people together. Food that showcases his heritage (yep, paisano, like me) and his very beautiful home in Napa Valley. The food may seem pretentious to some, but it is simple and beautiful and I love the feeling his shows, his store and his restaurant evoke.  I'm a fan, plain and simple. 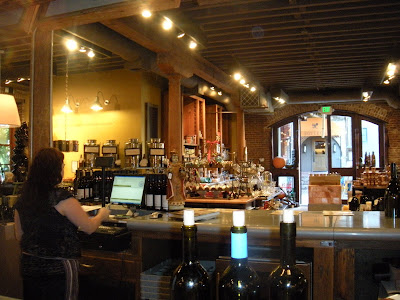 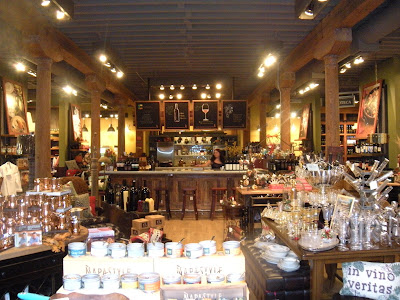 So as we shop in Napa Style the gals tell us that Chef is indeed in town and generally comes to the restaurant when he is. Of course I knew he was in town, because I saw him at the airport. I sort of slunked around the men's room exit, but I missed him somewhere, but I did tweet that I would see him later in the week for dinner! Among my purchases was the Bottega cookbook and they told me he would personalize it for me. Yea! Another for my collection!  So dinner... We were seated outside, a gorgeous evening. Our waiter was charming and adorable, named XXXXX from Turkey. Very attentive but not annoying. He was happy we had our Chiarello Vineyards wine and promptly opened it for us. They start you with some fantastic bread and Chef's signature spread, Salsa di Parmigiano. You can Google it, but I have a blog about it that I have been writing for a few months, coming soon I promise. I have found other uses for this delicious spread. Also of note, are the charming copper tumblers. I love these little guys, and I have amassed a nice copper collection. I love the warmth of the color and hope Santa paid close attention to my obsession with these.

We began the meal with Monterey Calamari crisped with Arborio Rice Flour and Aioli Nero. The calamari were delicious. The Aioli Nero was basically an aioli with squid ink that made it black and rather tar-looking. It was really delicious, but we laughed and laughed with black teeth and tongues. After being married for 25 years, it was hilarious. On a first date, it could be a deal breaker! Our pasta course was Calabrian Sausage Lemon Ricotta Tortellini with Spicy Brocolli Rabe, Tomato-Pork au jus, and Mostro Oro Olive Oil. There were some tortellini with the sausage which was deep red and spicy. The other tortellinis had the lemon ricotta which was bright and fresh. They were truly delicious. Both of the first courses were ample for sharing.

So on to dinner. I hate to complain. I spend a lot of time alone these days, and I usually eat vegetarian on those nights. I was hankering for a nice piece of beef. Like rib eye, not a filet (ew!). It was not to be, the rib eye did not make the menu this night. So I went with the Wood Grilled Loin of Grass-fed Lamb, Saffron Braised Potatoes, Green Onions, Pistachio, Pesto and Rosemary Scented Lamb jus. I do chops at home but not loin, and I enjoyed this beautiful cut of lamb. Everything on the plate was right. Scott ordered Smoked and Braised Short Ribs with Whole Grain Mustard Spaetzle, Sicilian Pickles, Quince Paste and Smoky Horseradish jus. The meat fell off the bones, and Scott requested I duplicate this at home. It was terrific, and the mustard spaetzle was so flavorful.   I also ordered the Truffle-Parmigiano Fries because I just knew they would be good. I was right, and I seriously wanted to eat the entire plate of them.

We relaxed a bit before dessert. Finished the wine of course, and ordered coffee. Scott ordered the Molten Chocolate Cake and I ordered the Fig Crostada. We happily munched away, and as I went to take a bite, Scott said, "I wouldn't stick that in your mouth just yet."  Shut up....he was approaching our table! Yes, I met the famous Chef Chiarello. He is handsome and sweet and unassuming. Scott graciously took our photo and he chatted with us so easily.  I told him if he opened a Napa Style  in Nashville, it would need a little leather, but I would happily manage it!  I am an even bigger fan! It was certainly an anniversary to remember!  Next up, our last day in the valley.
Posted by Susie at 5:55 PM