I made it to the top of the hill, it is all downhill now!  The first 2 weeks of Whole30 can be challenging.  I love tackling recipes and keeping them compliant. The emails continue to be a great source of information, and I recommend anyone trying Whole30 to subscribe.

True to everything they told me, I did get sick.  I was so floored to wake up feeling like I did that first day with the flu a month ago.  It was awful.  It happened on Day 13 (unlucky, right?) The fever was more mild, and it broke the following night so I didn't suffer long.  I can only hope it has been permanently purged from my energized body.  My family thinks the 7 rounds of golf I played that week may have been a contributing factor.  I just know I felt great!  And I do again.  Tiger Blood is how it's described, and I'll take it.  The sleep is lovely, the mornings I bounce up at 5am, I am great at 3 in the afternoon and not searching for a cozy cat nap spot.  I played so much golf I didn't cook much, and I missed a few photo ops.  But here is a rundown.  And a quick word on compliance.  The Whole30 isn't for sissies.  They are sticklers for every single detail to be compliant or you start over.  I'm a little easier on myself than that, and I don't find this a nuisance or a short term plan, so my little slip up didn't send me back to Day 1.  Not going to happen. My slip up? Vanilla extract.  As soon as I smelled it when I was eating my blueberry omelet I knew I screwed up.  Selling great vanilla at Williams Sonoma for years, I had a few customers who steered clear of it and stuck to beans and vanilla sugar because of the alcohol.  Yep.  That 1/4 of a teaspoon in my omelet should have sent me back to Day 1.  Seriously?  I beat myself up enough, I wasn't going there.  If I'm going non compliant with alcohol it will involve a well aged Cabernet with one of those grass fed steaks!

We did have dinner guests one night, and I am happy to report they were stuffed when they left.  I brined some amazing bone in Iowa pork chops.  We put them on the green egg and served them with a salad full of junk (tomatoes, olives, cucumbers, scallions), green beans seasoned with some compliant (and expensive) bacon and a potato salad with compliant mayo and scallions.  It was perfect.  Did I mention the shrimp wrapped in that bacon and grilled?  I mean whats a dinner party without an appetizer?

A few nights later, Mr. Preppy and I played in a tournament and it went way longer than we had hoped.  As we waited for the results and prizes (we took second!), everyone was sipping cocktails and eating chips and dip.  We sipped our LaCroix with a lime, looks like a cocktail, and politely nibbled on nuts and grapes.  People felt sorry for us.  Ha!  Jokes on you.  I feel sorry for you.  You have no idea how amazing you can feel when you give your body whole, nutritious food.  We were pretty hungry when we got home so I took out a couple cans of Wild Planet canned salmon.  I mixed it with egg, some compliant spicy seasoning, a squeeze of lemon, ground almond meal and some chopped onion and a jalapeno right out of my garden.  I made the mixture into 5 patties and fried it up in some coconut oil.  I had a little avocado and lemon with mine and Mr. Preppy made a little faux tartar with approved mayo and dill pickle.  They were delicious and not seriously filling for being so late in the evening.  A salad and a roasted veggie would make it the perfect real dinner for sure.

Mayo and chopped dill pickle for tartar knock off

Mix all ingredients well and you will want it to stick together.  Add anything from the crisper drawer, and any spices or herbs you may have on hand. Form 5 patties (one of mine was smaller than the others, that was Mr. Preppy's 3rd for his dinner). Fry in coconut oil, just a Tablespoon until crispy and flip and continue.  Serve with avocado and fresh lemon or pretend tartar.

A few mornings later after barre, I was standing looking in the fridge.  I knew breakfast was eggs of some sort.  I just really wanted something a little sweet.  So I whipped up a couple eggs and a couple egg whites (my pooches like a yolk each!), some coconut milk, a scrape of vanilla bean and I cooked it like an omelet in my skillet topped with blueberries.  It looked great, until I tried to get it out.  My daughter was terribly unimpressed with this, I rather enjoyed it, a nice break from mushrooms, onions and salsa eggs.  In my old life, I would toss some old fashioned oatmeal in there to ramp up the fiber, but those days are behind me!

Whisk all ingredients to the blueberries, and place in skillet that has a film of coconut oil.  Cook over medium low heat and sprinkle the blueberries on before it is totally set.  Try as carefully as possible to flip, and when it disintegrates, say screw it, and make it a blueberry scramble.  Put a little ghee on top and enjoy!


Guacamole Deviled Eggs
I can't really give you a recipe per se.  I boil up a dozen eggs on Sunday so I have a to go protein all week.  I took a 4 eggs and peeled them and took 2 yolks (2 yolks for my dogs!) and mashed them with some guacamole I had on hand.  It was quick and easy and great with a salad for lunch! 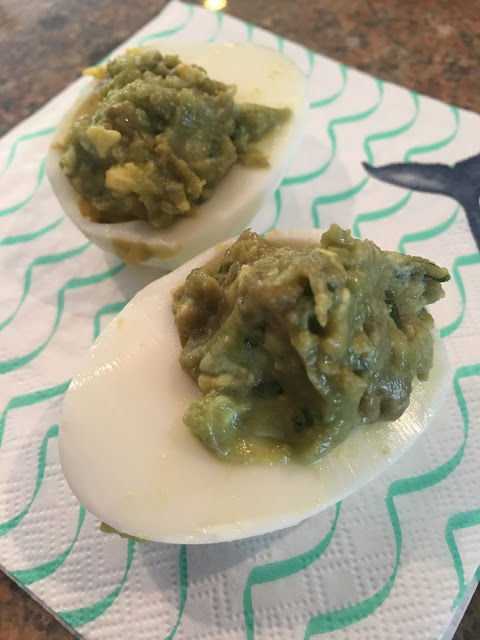 So here we are winding down to the last 10 days.  I am cruising along pretty good.  My clothes fit great, the giant zit has disappeared (where did THAT come from) and my fridge is bulging with great ingredients! I was alone a good number of nights in this segment of Whole30, so hopefully I'll get cooking this week.  So, what are you waiting for?  Get in there and cook whole!!