Boy, time sure does slip by....I never stop cooking and baking, but I seem to have stopped writing.  Let's change that.  Now that summer is slowly creeping toward fall, I love the idea of a fire, some bourbon, a cigar (to smell, not smoke), a night without tv, a night outside.  It's such a misnomer about summertime in the South, sitting outside at night is not pleasant.  I love my screened in porch every month of the year except June, July and August.  So. Damn. Hot. Here is a little Bourbon love.  The cookies have no bourbon in them, just painted to look like it!  The Rice Krispie Treat however....these are seriously addicting!  First the cookies.  I made them first for my Nic, I needed a practice run with the painting.  He had no issues being my guinea pig.

I love to paint on cookies, it's a relatively new skill I am working on.  It all started with these amazing Christmas cookies.  Then I found this gorgeous Chinese brush pot.  It is intended for calligraphy tools I believe, but I had to have it.  I have searched the web and have never found a match, but there are gorgeous brush pots out there! And, if you know me, you know I love birds! 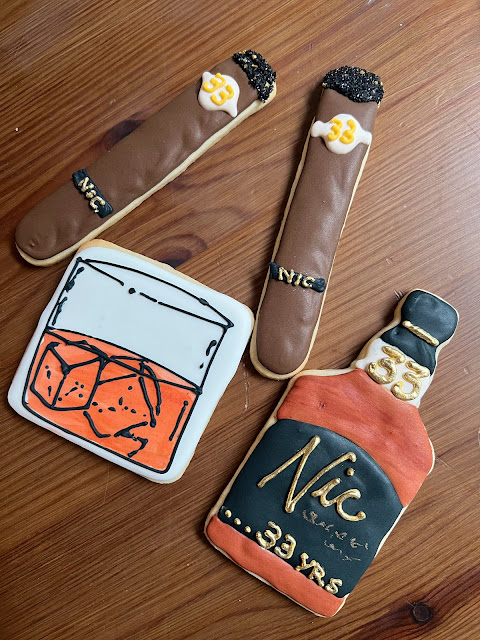 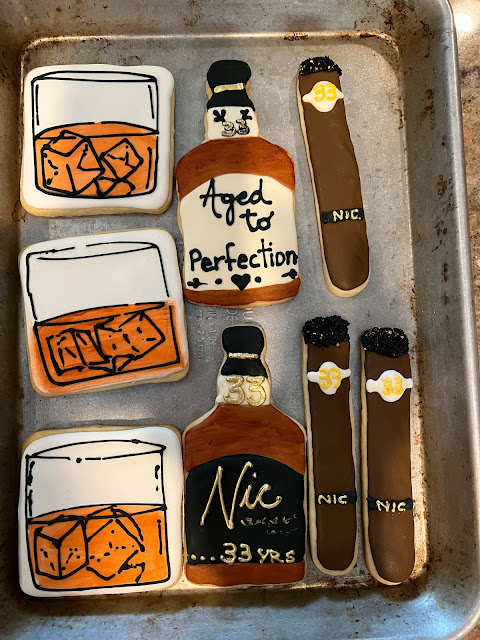 So these 2 photos are the first attempt for Nic.  We were pretty happy with them, but felt maybe the color was too intense.  They were a bit of a rush job, so I knew the cookies the following week would be an improvement! 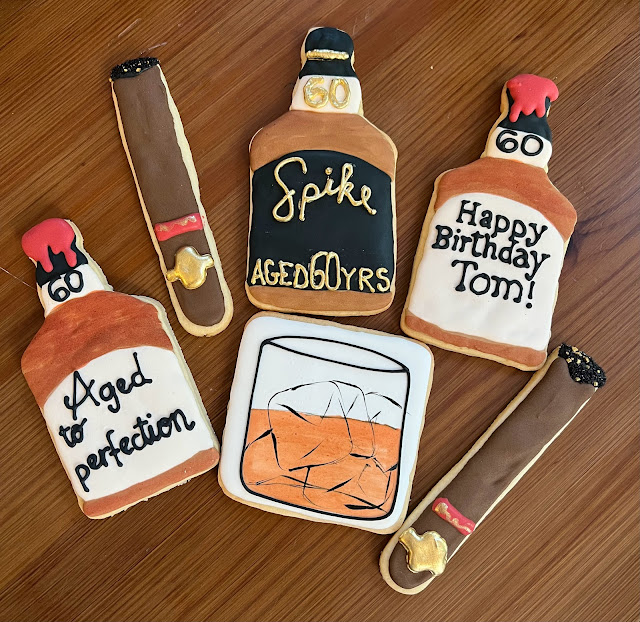 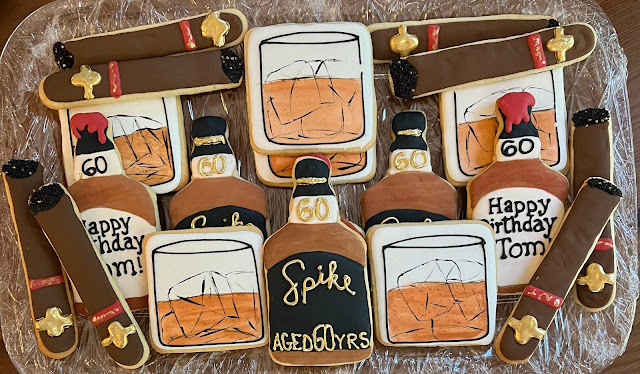 I was thrilled with them and my friend said her husband thought they were perfect.  Can't ask for more than that! Then the call came for my friend's retirement party, and his drink of choice is an Old Fashioned.  So I painted a cherry in the bourbon!  Worked out well!
So after all the cookies, I was headed to visit kids, and was thinking of some sweet treat to make while I was there.
I found this recipe on Food52 and in true form I tweaked it based on the reviews. I am a browned butter fan from way back, so there was nothing new there.  And I tend to add way more rice cereal than a treat recipe calls for and I have been known to use up all the marshmallow bags that have been hiding. There is no chemistry here, just sticky mallows and rice cereal.  Add as much as you like.  If you use Dandy Marshmallows, people complain they don't melt well. I disagree. They are vegan, but honestly the best mallow I have ever had, they make great treats, and if I ever find the maple ones I will let you know!  I figured I better add more bourbon too, my son had this smoked maple bourbon....some chocolate wouldn't be terrible... 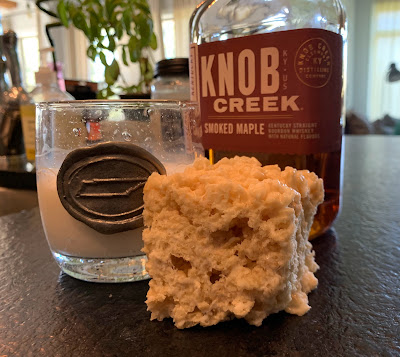 Browned Butter Bourbon Rice Krispie Treats
2 sticks salted butter
3 bags mini marshmallows (12oz bags)
1/2 cup bourbon (twice as much as they call for :)
1 T vanilla
1/4 teaspoon salt
12oz box Rice Krispies
In your biggest pasta pot, melt the butter gently until the color turns light golden brown.  The butter should take on a nutty aroma.  Don't rush this, if the butter burns you have to start over.  Add your marshmallows, I just dump them all in. Stir and stir and stir until the mallows are melted and smooth.  Remove from heat and add vanilla, cereal and salt.  I add enough cereal so the treats aren't gooey, but crunchy.  It was suggested to not press them too firmly into the pan, and I think that's great advice.  Keep the cereal crispy!  Top with flaked sea salt if desired, and if there was a layer of dark chocolate, sea salt would be just what they need!
Now yes, there is bourbon in here.  Will a kid get drunk?  Doubt it.  Will they taste it?  If you use a half cup, yep.  Alcohol does evaporate over time, so I would suspect they'd lose their alcohol potency but not the flavor.  I am not an authority on this, so serve them to your adult friends and make the kids some Scotcharoos.  You don't know what those are?  Just wait.  I'll be back soon!
What are you waiting for?  Get in there and cook!
Posted by Susie at 3:14 PM