Bread and Soup (and Benedryl) 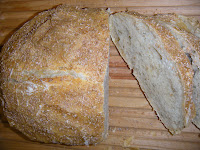 Does anything say dinner in the winter like bread and soup? The weather has been positively crummy here. Rainy and grey, I know I could never live in the Northwest. My solar battery was on empty, but today the sun shines, I soaked up my requirement of Vitamin D and went to work. Now this meal would have been perfect on one of those freezing, wet, nights, but I couldn't muster up the energy. Besides, tonight everyone is home.
I started yesterday with the famous Mark Bittman no-knead bread. This recipe has been scooting around the Internet for a long time. I used the Williams Sonoma version which is with rosemary and lemon. Mine wasn't picture worthy in the prep stages as I mis-measured the flour on the first batch, and let the second batch rise too close to the exhaust on the oven. Who knows what sort of disaster lies in my oven as we speak, but they are both baking and smell fabulous. 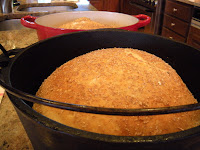 And they were fabulous!
I decided Minestrone was a great way to sneak in a (semi) vegetarian meal. I used the Winter Minestrone recipe from Giada as a starting point. Yes, it calls for pancetta, but that isn't meat, it's fat and flavor. It's also the single reason I couldn't be a vegetarian for life. Ah, that salty, smoky flavor, there is nothing like it out there. But I digress. I chose not to use beef broth, and used low sodium chicken broth instead. I also dumped in a small box of dried cheese tortellini to make it a little more satisfying. My last change was red chard, and am I glad I chose it. This is the reason my soup is so beautiful! 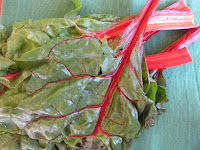 My reason for picking this minestrone from the hundreds out there was the chard. It is very high in iron, and I seem to be lacking in it. I found a website that lists the most iron rich foods, and was amazed to learn that based on a 200 calorie serving, dried parsley was the highest in iron! Imagine! So I did a little calculating and figured I'd need to eat about 2.2oz. of dried parsley to get 200 calories. 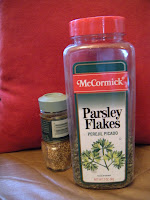 The very large jar in the photo (compared to a normal spice jar) is just 2 ounces, that's a lot of dried parsley! The number 2 high iron food was air dried whale meat. That just doesn't sound environmentally friendly. So chard it was.
Dessert was a little something called apple pita. Many people are familiar with spanikopita, the Serbs have their own version. We make both cheese and apple, and it was Nic's request we have apple pita. 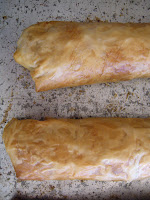 Basically it is apples, cinnamon, sugar and graham cracker crumbs rolled in phyllo and brushed with butter and then baked until golden. Really pretty easy and basic. I just love that stacked phyllo, crispy and buttery, little shards of phyllo crumbling off with every bite. I have had great success freezing it, but I don't believe there is any better way to eat it than crispy from the oven.
And now a Post Script, (you know a P.S.), I had dinner, enjoyed every bite, washed it down with a little Pinot, and was going to snap my pictures when I served Scott his bowl as he was running a little late. However, I discovered shortly after I broke off a crusty piece of bread to nibble on, I am allergic to fresh rosemary. Not ingesting it, because it is in both the bread and soup, but a little piece on that crust poked my lip, and within an hour, I looked like a lopsided Who from Whoville. Scott rushed off to Walgreen's to get me Benedryl, which had me in a coma within half an hour. So now the soup isn't as pretty, come to think of it, neither am I, I look like I sparred with Rocky. Just a little swollen, not nearly as large as last night. But I am off to Williams Sonoma and think I'll save the Benedryl for when I'm close to a couch! This photo is a next day leftover picture. The tortellini were a little soggy, but the flavors were fabulous! 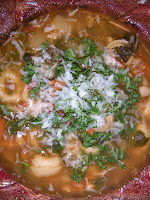 Giada's Family Dinners
Winter Minestrone with my own tweaks...

Heat oil in large pot and add pancetta and garlic. Cook until slightly crispy. Add the onions, carrots, celery and cook until the onions soften. Add the chard and potato, stir and cook for a few minutes. Add the tomatoes with the juice and rosemary. Cook until the chard begins to wilt.
In a small bowl, take about 1/2 cup of broth and 3/4 of the can of beans and puree. I use an immersion blender, but you can use a blender if necessary. Add the puree, the reseved beans and all the stock. Add the rind if you are using it. Bring to a low boil and add the tortellini. Loer the heat and simmer for about 8 minutes or until the potato and tortellini are all cooked.
Ladle into bowls and top with fresh parsley, fresh parmesan and fresh ground black pepper.

The bread recipe is EVERYWHERE! I used the version found on Williams-Sonoma.com
Get In There And Cook!
Posted by Susie at 4:07 PM