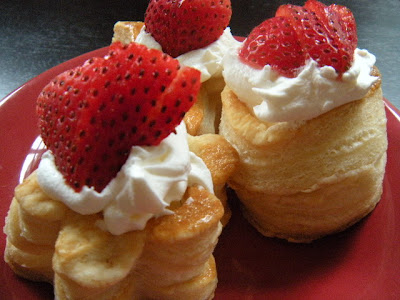 The September 2009 Daring Bakers' challenge was hosted by Steph of A Whisk and a Spoon. She chose the French treat, Vols-au-Vent based on the Puff Pastry recipe by Michel Richard from the cookbook Baking With Julia by Dorie Greenspan.

I took August off due to the many things that flooded my usually sane life. When I saw the challenge for September, I was very excited. I love puff pastry and find it a valuable resource for the holidays. Beef Wellington, appetizers, dessert, it really goes the distance. For the past few years I have seen a puff pastry for sale in the Williams Sonoma catalog touted to be much better than the famous frozen food brand at the grocer. I could never bring myself to part with the cash to try it. So this month I embarked on the Julia Journey and made it from scratch. You start with a pound of butter, so from there what could go wrong?

I watched the PBS video with Julia and found it a good refresher although I saw every PBS show from the Baking With Julia Book, it was my version of Saturday morning cartoons for awhile. The ingredient list is small: butter, flour, water, salt, and a food processor and rolling pin are the only utensils so to speak. This is not a task for anyone in a hurry or in a hot climate without air conditioning. Although it is September in Memphis, it is so muggy, I cranked the air way down, but still found a good hour of chill time necessary between turns.

To say the recipe and instructions are lengthy would be an understatement. If you really want to make this, Google it and find the original Julia recipe for puff pastry. From the finished puff pastry, we make the Vols-au-Vent, French for "windblown" due to the lightness of the pastry. They are a hollow shell happy to encase any filling. I made my obligatory Vols-au-Vent with whipped cream and strawberries.

It is imperative with the warmth that you roll small portions of dough so it doesn't get too soft, you never want to see butter ooze. The idea is to cut a large circle say 3" diameter, then a second. You then cut out the inside of the second circle and place the ring left around the first circle. The idea is that you make a bit of a bowl for filling. I did circles, stars and flowers. My cutters apparently weren't sharp enough, because where I had to stretch a bit, the pastry didn't rise. I took the cut insides from my shells and also brushed them in the egg wash and sprinkled a little black finishing salt on them. My own amuse bouche. They discourage wadding the scraps and re rolling, but suggest you stack the scraps to re roll. 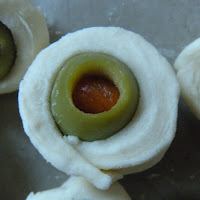 I took what was left and sliced them into strips with a pastry wheel and wrapped a few queen olives. After wrapping them I froze them and then put them in an airtight container. Some night when the temperature drops and we are relaxing with a glass of wine, I'll pop them in a 400° oven and enjoy that puff with the salty earthy olives. Mmmmm, makes me wish for cooler weather right now. Then I happily rolled the remainder of my puff pastry flat and folded and put it in the freezer so at a later date I can make cheese straws, and wrap it around savory appetizer fillings and make more Vols-au-Vents. Sounds like another blog in the making! Am seriously hoping one of these upcoming Daring Baker's Challenges calls for yeast, I am hankering to bake bread! 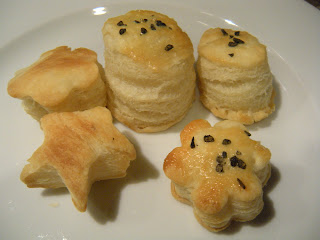