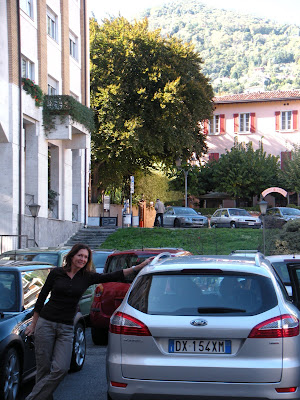 I was lucky to have a 12 day vacation in 3 countries, and I have so much to get off my chest about it all. From food, to driving to the charming towns, crazy happenings and the hunt for the family lineage. This blog is dedicated to the greatest feat in Italy since the Coliseum: the Autostrada. It has different names in different countries (we all know the Autobahn in Germany) but the concept is so smart. But let's start the journey before we even get the rental car in Italy. We first went to Croatia and Bosnia and had the privilege in Bosnia of riding with a teenage boy.

We arrived in Dubrovnik and we were located one block from the walled city, so transportation was not an issue while in Croatia. However, we had a one day adventure planned to Trebinje, Bosnia to visit some relatives. I had no idea that there was such tension between these two countries still, and the fact that we were going to Bosnia to visit relatives was not looked upon favorably. There is basically only a small mountain range between Croatia and Bosnia and we hired a driver to take us the 18 short miles into Bosnia. Lucca the driver was 8 when the "last" war broke out. He told us about no power and limited food and bombings from the top of the mountains. His dad was off fighting for months with no contact. Can any of us imagine that? Thankfully both countries have rebuilt and the scars of the war are hard to find. He dropped us off and left. He met us at the border after dark. Sounds very clandestine doesn't it?

Trebinje, Bosnia is a small city, and like most European towns the streets are narrow and packed with cars. We met the relatives at a hotel for coffee and lunch and then went in their cars to see the old cemetery and homestead. My parents and I rode with Vladomir, my second cousin (?), 21 years old, and doesn't speak a lick of English. Thankfully the stereo in his car works perfectly and he blasted the Bosnian music as we screamed down one lane roads (at least until another car comes) to see the sights. Hard to believe it was as uneventful as it was. Driving to the border in the dark was the real highlight.


A few days later we flew to Venice, Italy and went to Hertz to begin the real driving adventure. The car was a European Ford model, like a mini station wagon, Lori was the driver with her International Driver's License, (for $30 you can get one too, no test involved), I was the navigator. We got our maps, the map quests we printed off at home and left the airport. I pride myself on my navigation skills, however they failed miserably that night. I navigate by direction, and in the dark, a compass would not have been a big help, because you drive in circles, no one there cares what direction is North. The signs are a little tough to follow sometimes because they are essentially names of town on an arrow, and you must know what town lays 20k or 40k down the road, and exiting through a round-a-bout can be a heart stopping event for a newbie! It took us 1 1/2 hours to get to the hotel which was about 2 miles from the airport, but we had our first Autostrada experience which would come in very handy as the week went on.

The Autostrada is essentially an Interstate, but with very clear rules, which no one really follows. They are generally 3 lanes, large trucks to the right, small trucks and cars in the middle and cars only in the left. What a great idea, you rarely find yourself stuck behind or between semis, but the truck traffic is staggering and they tend to block the signs posted on the right. Also the speed limit is higher for the car lane, although it is posted so infrequently we were never sure what it was, "keep up" was our motto! We were very fortunate to be traveling in the off season, as the traffic jams reported on the Autostrada are nightmares. You enter the Autostrada and take a ticket and then wait for an opportunity to jump in (jump in the truck lane no less). There are few exits on the road, and you have to know what large cities are near your destination. When you go to smaller towns, you sometimes exit many miles before and take smaller roads to your destination. It's an interesting system, reduces the merge factor significantly.

The private highway system is also home to the Autogrill, basically the only food option on the road. We had to partake, and were amazed at the number of people. You have a bar, which is where you get your coffee. No paper cups with hot sleeves here. A shot of espresso in porcelain, down it at the counter and get out of the way! Then the Snack section, various sandwiches, pizza even french fries. I was impressed that even though they eat standing up, no one eats with their hands. Apparently hands are only for talking! They keep the sandwiches wrapped where they hold it, and eat pizza with a fork and knife. They serve beer, bottle and on tap...scary. And there is also a sit down restaurant where everything is made to order and you can have a real Italian meal with Anitpasti, Primi, Secondi and Contorno, and Dolce and Espresso. Then there is the store section which you have to pass through to exit the building. Similar to ours they offer an abundance of snacks, condoms, chocolate, drinks (even the hard stuff) and toys. It is a self enclosed highway system, so no other food or gas options unless you exit. If you get off, you pay your fare, a few Euros to 20 Euros and up depending on how far you have traveled. The pay off is clean roads, well maintained, well lit tunnels and pretty good signs. We took the Autostrada from Venice to Lake Como and then southeast to Foggia. We were never in a traffic jam and the experience was great! 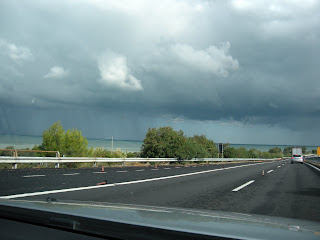 As we drove South on the Autostrada past Pesaro, we were awed with the landscape. To our left the Adriatic Sea in all its majesty, to our right the snow capped mountains of the Apennines southern edge. The road winds and goes in and out of tunnels and is flanked in the Puglia region by lush groves of olives and grapes that cling to the rolling hillsides.
As soon as you exit the Autostrada and its self funding toll system, you see how bad things really are. The secondary roads are not maintained well and have inadequate signage.

My favorite sign was a white triangle outlined in red with a huge exclamation point. Pretty self explanatory. When we reached our destination in Puglia, the small home town of my grandparents, we were twice met on the small 2 lane roads with washout. Amazing how one lane of the road just seemed to slip away down the embankment. Not sure how well that plastic tape would hold back an auto coming around that curve! 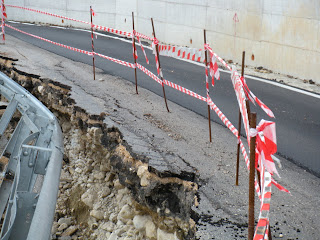 We survived the great driving adventure. We found parking, with big kudos to Lori for her most impressive manual transmission parallel parking, we had no fender benders, we were lost only once (it was a biggie however), and we saw 1500km of Italian countryside. Just wonderful. Next we explore the delicious food that awaited us.
Posted by Susie at 7:05 AM

Email ThisBlogThis!Share to TwitterShare to FacebookShare to Pinterest
Labels: Autostrada, driving in Italy