Where I Come From: Part 2 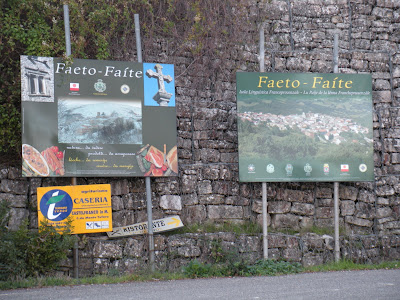 This insert is dated Aug. 2011, I encourage anyone with Faeto roots to head over to Faeto.blogspot.com.
So I have blogged about my Croatian/Bosnian adventure and the maternal side of the family history, now for my paternal heritage. The last part of the great European adventure was spent in Faeto, Italy. Faeto is a small town in the Puglia region about an hour from Foggia, unless of course I am navigating the terribly marked roads, then it could take closer to 2 hours. Faeto clings to a rocky hillside, probably looking very much as it did when my grandfather left there at the age of 14. This was my second trip there, and it was as moving as the first. But the first must be revisited to bring perspective. 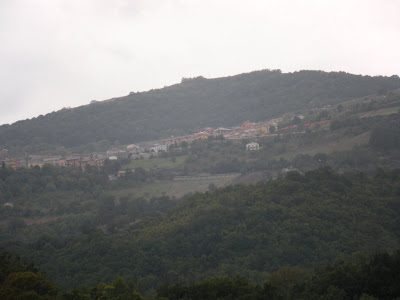 In 2003, my entire family, 23 of us went to Italy. We were celebrating my parent's 50th Anniversary and saw Italy in our own bus. We hit the highlights, David, the Leaning Tower, Ponte Vecchio, the Coliseum, the Vatican and Amalfi. But hands down the highlight was the culmination of the treacherous drive on the narrow roads to Faeto. The last few miles are canopied by trees that were in blazing color. The bus parked at the edge of town, and our new internet friends met us for the day, we had 3 guides to help us with the language. Faeto has a heavy French dialect and the Italian there is different than any other region. 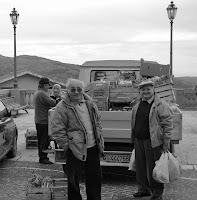 We began at the small farmer's market where this cute old man walked up to me and and said "Who are you?" And I said, "We are Petittis." He smiled and said "So am I". And that's how it was. We were quite a sight as our mob walked the small cobblestone streets my grandparents walked. We made offerings in the church where they were baptized and walked Vico Valentino, the oldest street, dating to the 15th century and named for the women of my family, sisters or cousins Rose and Maria Valentino who married the Petitti men. 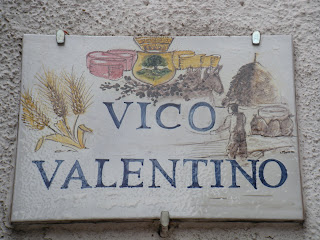 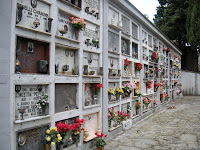 Six years later we took the same walk on a similar fall day. The air was heavy with the smell of fires in the small homes, and the cemetery was filled with Petittis, certainly we all share the same blood. The cemeteries are peculiar here, perhaps because of the rocky terrain or the wet winters, but they do not bury the dead. They have large walls like a mausoleum and a headstone, wired with electricity so they have a light on all the time. The addition of a photo is also very common, and a little eerie for sure, but a rarity in the U.S., although my great-grandfathers grave in Chicago bears his photo. Sitting alone in the cemetery on a small rock wall, was an old lady, wearing black and saying her rosary. The whole town has been burying their dead in this small cemetery, it is a moving place.
We have very little information on the lineage of the family. My great grandfather came here as a young man and was murdered in Cleveland, OH. My grandfather was just 14 when he made the trip from Naples, just a year after his father died. They were so willing to walk into the great unknown for a better life. My own dad says that there was very little information about Faeto from his parents. Like many immigrants, you were careful to only speak English and absorb the new culture. No one wanted to be labeled an immigrant, they wanted to be Americans. My grandfather served in WWI to become a citizen. The history of the Italian heritage was literally lost over the years. But there is something oddly familiar and comforting in Faeto. Maybe because it is so small and after two trips I know the town like the back of my hand. Maybe it is because although my grandfather came to America, he left many family members in Faeto, and the names in the cemetary and the faces in the windows are my cousins, many years removed. 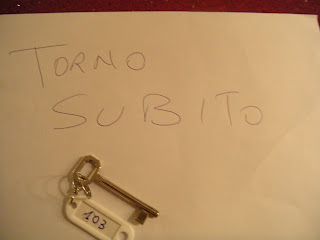 On this trip my parents, my sister Lori and I arrived in Faeto at dusk and found our hotel in the small park in the woods outside of Faeto. The lights were aglow and we entered the modern building and found no one there. We laugh to think that this could never happen in the U.S. There on the counter was a note (in Italian of course) and 2 room keys, skeleton keys, no less. We brought in our luggage and hunted for the bar for a little wine to take the chill off. Our host arrived shortly thereafter and spoke NO English. Our old friend from the last trip, Pepino, came to have dinner with us at the hotel in the woods and we celebrated my dad's 80th birthday that night. Imagine, celebrating your birthday in the town where your own father lived 100 years ago? It was a poignant evening. The food was rustic and home made and delicious. I love a 3 hour meal, what a wonderful way to live! 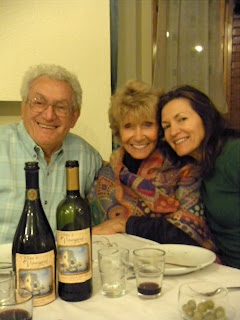 We spent a few days exploring the area, eating the wonderful comfort food of Italy, and meeting the locals. One afternoon we walked into the bakery. We had been eating this wonderful bread everywhere in the area, and the small bakery where they bake it was warm and inviting. We sampled the day's offerings, my favorite being the bread stuffed with sweet cipollini onions. The funny thing was Anna the bakery owner was sitting with her laptop surfing facebook! I gave her my card and she friend requested Lori and I. Too bad my Italian is pitiful and we can't really chat, I am very dependent on Google translator. She especially loved the photos I posted of her, her family the bakery and some of the colorful locals. It was a short visit to Faeto, but we have accepted the fact that indeed, this is where we come from. Many of the little details are faded and lost, and that's okay. We embrace what is left, we hope the grand children and their children will someday drive under those canopied trees and walk Vico Valentino, pray for the Petittis buried in the quaint cemetery and feel the same connection to generations of family. 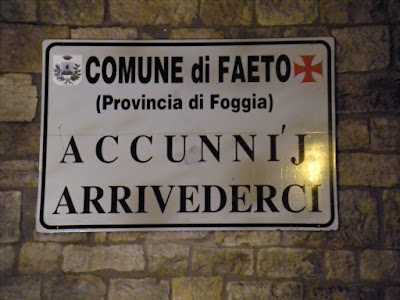