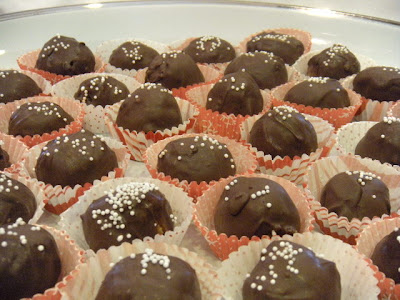 To whom do I owe this idea? Well, around the web, Bakerella gets the credit, she seems to be the first "mainstream" blogger to put these up, although she called them cake balls. First posted in 2007 and over 450 comments, well, this is a bloggers dream post. I stumbled on her blog a while back after Googling cake balls. Let's face it, that is a bad name. It makes teenage girls giggle, and frankly, they are the target customer for these sugar bombs. My sister in Iowa, the viticulturist sister not the singing, glitter sister, told me last year she made cake balls. I admit I was a little curious. She told me mix cake and frosting, roll 'em, dip them in candy melts, done. I thought YUK! But after my web search, that was pretty much how everyone, including Bakerella was doing it. I love to bake homemade cakes, fine crumb, great cocoa, vanilla bean, but I could see no reason to waste a homemade cake on cake balls, so fine, a box would work. The candy melts, well, yuk again. They are greasy, and after years of hand made truffles coming out of my kitchen bathed in Guittard I broke down and said, okay, candy melts, no tempering for cake balls.

Then came the frosting. I do not like, nor buy canned frosting. I used to sell it. Yep, cans of Duncan Hines frosting by the case, "Please Mr. Grocer, wouldn't you like a display devoted to cake mix and canned frosting?" But that wasn't my big seller, you see in 1984 or so, the #1 selling item in the grocery was Crisco, and I was the Crisco girl. Did you ever notice how closely Crisco and canned frosting look? One of our pitches was to fill a Crisco can with vanilla frosting and take it in a store and pitch the manager on a Crisco end cap, and open up the can and eat a spoonful of the "frosting" Crisco to gross him out and explain that Crisco is never bought alone, there are dozens of add on possibilities. Yes, it worked, but I was so over the frosting fascination. Quick buttercream is SO easy, why bother with the canned stuff. So I mentally filed my cake ball ideas.

One balmy fall weekend we were heading to an out of town volleyball tourney and I offered to bring dessert. I thought maybe cake balls would work well. Thankfully 16 year old girls could care less about how the sweet things look, because it was disastrous. Remember my instructions were mentally filed, and things are a little crowded up there. I had a few boxes of Williams Sonoma Cookies and Cream pound cake mix that I bought on clearance. I baked one in an 11x7 pan and cooled it. I whipped up a yummy vanilla bean buttercream frosting and mixed cake and frosting. rolled them out and dunked the crumbling balls in gloppy faux chocolate. They looked disgusting and everyone loved them. I knew I would return to this since I had 2 more boxes of mix, so here we are. I returned to the Web and was thrilled that the name cake balls had morphed into cake truffles, they were better already!

I again baked the cake in an 11x7. In the 15 million Google results for cake balls, half tell you to cool the cake, the other half to not. I cooled it and then crumbled it into a bowl. I made a basic quick buttercream, 1 stick unsalted butter, ~3 cups of xxx sugar, vanilla paste, dash of salt and milk to get the right consistency. I then incorporated small amounts of frosting at a time to get the stuff to stick. Not gooey greasy balls, but balls with texture. It does help that this cake mix actually has bits of an Oreo-type cookie in it. Then I chilled it. After about an hour I rolled, and I rolled them small. Then I chilled them again. Then I melted the faux chocolate. It's even more temperamental than the real thing, or maybe I have used the real thing for so long it seems easier to use Guittard. Regardless, I used a double boiler and got the water to a good simmer without anything in the top pan, just letting it get hot, and removed the whole thing from the heat. Then I dumped in the candy melts (which is a brand name for Wilton) and a small amount of Paramount Crystals which are like a dried shortening (get them from a candy making store), it makes the chocolate very smooth. I was surprised how smooth the chocolate stayed not being on any heat source but the water. My mistake the first time was overheating the chocolate and it got lumpy, which by the way, is unattractive and quickly melted my buttercream. I then sprinkled a few nonpareils on top for the contrast and voila. 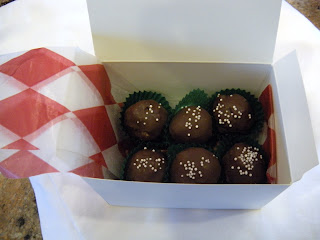 A few more steps, but the chill time made a big difference for me. I'm not a huge fan of the taste of the concept, I prefer my cake in a slice so I can eat cake, then the frosting, but these are great small nibbles of cake. Less mess than a cupcake, lots of decorating possibilities, and endless flavor combinations. It made so many I boxed up a few dozen for the mail lady. So, what are you waiting for? Get in there and bake!
Posted by Susie at 10:00 AM