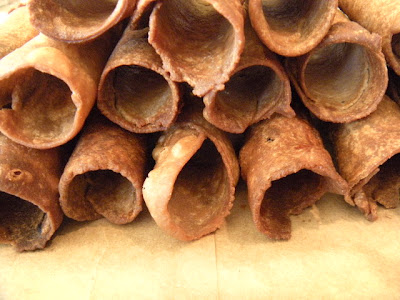 Yes, I am aware it is December, but seriously, a house full of relatives: parents, in-laws, siblings, children, nieces, nephews, a couple of baking orders, 3 days of retail including Black Friday and Poof! November was gone. So here we are, making cannoli. The November 2009 Daring Bakers Challenge was chosen and hosted by Lisa Michele of Parsley, Sage, Desserts and Line Drives. She chose the Italian Pastry, Cannolo (Cannoli is plural), using the cookbooks Lidia’s Italian-American Kitchen by Lidia Matticchio Bastianich and The Sopranos Family Cookbook by Allen Rucker; recipes by Michelle Scicolone, as ingredient/direction guides. She added her own modifications/changes, so the recipe is not 100% verbatim from either book.

I am a seasoned cannoli maker. It is best made ahead regardless of what any non-Italian tells you. My grandmother would make hers in November and layer them on brown paper in boxes in a cool room. The paper absorbs the oil, the cannoli ripen and dry out a bit. Nothing is worse than a soggy cannoli, therefore, you never fill it before you want to eat it, and the frozen ones pre made? Forgetaboutit!

I made my dough after dinner one evening and let it rest in the fridge overnight. I was concerned. I had always used a sweet white wine in Grandma's recipe, but because it is Daring Baker's, I went with the recipe posted and used Marsala. Now I am not familiar with it, so my requisite for the wine guy was that it had to be drinkable as I rarely get into a project like this without a little nip for me. The color of the Marsala was deep amber, beautiful, tasted divine, but made my dough very brown. 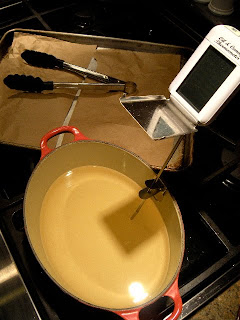 The next morning I rolled them with the trusty pasta machine so they were super thin and sort of made 5" circles and wrapped my tubes. I have inherited quite a collection of tubes and recently added to it. One year I did an Italian dinner fundraiser for my alumni club (Go Hawks!) and made about 70 ahead. 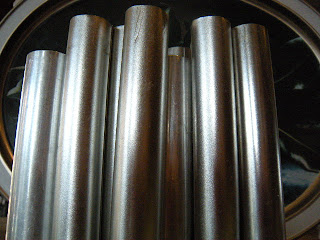 This recipe made about 24 very dark cannoli. Now please don't get me wrong here, they are DELICIOUS, but they are not pretty. My Grandma's recipe follows, I suggest you try it. It doesn't have the vinegar which the Daring Baker's found so important, but if my memory serves me right, I fried up batch after batch of them and they were perfect. It also doesn't have cocoa and of course the wine is specifically white, my preference.

The Daring Baker's recipe called for 375° oil, but when you drop 2 shells in the oil, the temp plummets. I preferred the cannoli that went in closer to 380°. They got that beautiful blistered effect, but a degree higher led to brown/burnt cannoli. The entire batch was really less than perfect, my fault entirely.

The blog problem here is that although they are made and leaching out their excess oil, we are not filling and eating the little guys until I have a reason. Like my son home, or company coming, or a little something to celebrate. So here is my blog to that point and you Daring Baker's will have to wait until later in December to see the finished product with sweetened ricotta and chocolate, maybe even some pistachios. Until then, Buon Appetito!
Posted by Susie at 8:04 PM