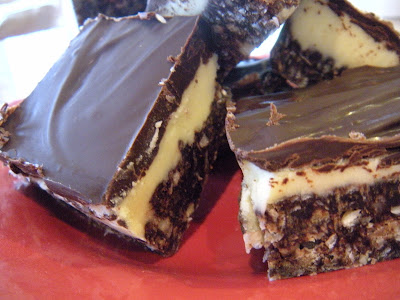 It is all about Canada this month with the Olympics and the Daring Baker's Challenge.

The January 2010 Daring Bakers’ challenge was hosted by Lauren of Celiac Teen. Lauren chose Gluten-Free Graham Wafers and Nanaimo Bars as the challenge for the month. The sources she based her recipe on are 101 Cookbooks and www.nanaimo.ca. So call up your favorite Canuck and make them a little something from the homeland!

Interestingly enough, I had my first Nanaimo Bar this Christmas at a friend's house and have to admit I was intrigued. They are unlike anything I have ever baked or eaten. They are named for Nanaimo, British Columbia, gateway to Vancouver Island, a pretty town for sure. And the Olympics are about to get underway in Canada as well, so how appropriate. 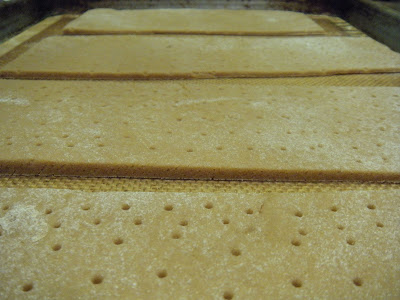 They are requiring us to bake the graham cracker base first, although I chose not do the gluten free recipe they published only because I already have so many different flours on hand, the thought of buying tapioca flour and sorghum flour was a little over the top. So I used only King Arthur's White Whole Wheat and the rice flour I had on hand for rolling. I loved the way the graham cracker dough came together and rolled out. It was sturdy and delicious. They puffed a little while baking, but really kept their shape and look, amazingly enough, like graham crackers! I am skipping the graham cracker recipe, as there are a million graham cracker recipes online, and the Nanaimo Bars can be made with Nabisco Honey Maid. However, as the wife of a graham cracker lover (Honey Maid only!) no one was more surprised than I, when Scott declared these homemade grahams the best, better than little ol' Nabisco. 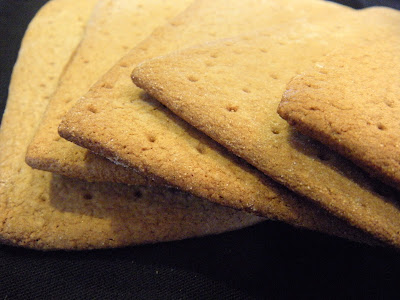 I doubt I will make them on a regular basis, but after doing the s'more's test, I will bake them again. They really are delicious. 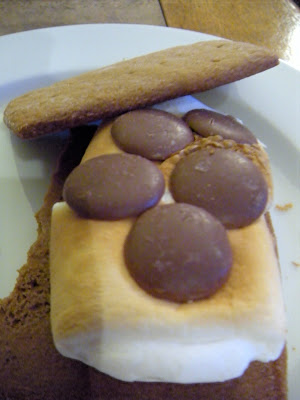 The Nanaimo Bars are three layers. The base is delicious, butter, cocoa, sugar, nuts, coconut and graham crumbs. Yes, I painstakingly made perfect graham rectangles only to have to toss them in the Cuisinart and pulverize them. Truth be told, when you add the Pernigotti cocoa and coconut, plus an entire stick of butter and some almonds, you could use generic grahams and not tell the difference. The egg in the crust needs to be cooked over the simmering water of the double boiler, but having made numerous crusts in my life, I think you could skip the egg entirely. The cocoa crumb crust on its own is very yummy!

The middle layer is what stumped me when I tried these in December. My arteries clogged right up when I discovered it is a butter-heavy buttercream. An entire stick of butter, icing sugar (I love Canadian lingo, yes it is confectioner's sugar) heavy cream and dry pudding. It could easily be cut down in fat with half as much butter, maybe fat free half and half, and sugar free fat free pudding mix (which is what I used). The way the recipe stands, rich is an understatement. It makes enough buttercream for a 9x13 cake!

The top layer is chocolate and hey, more butter, and it ends up like a ganache. Delicious? Absolutely. 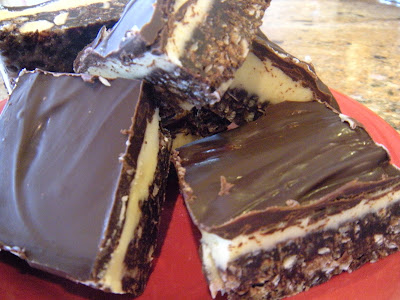 I actually wrote this blog in steps, as I am at the moment of publishing, sitting on the beach. I knew there would be no wireless internet, and I had to do the challenge and write the blog before I hit the airport. I was very ho-hum about this challenge as it went on. Then I chilled the bars and cut my pieces for their photograph (which I totally suck at by the way). Of course I had a little bite. OMG. They are amazing. Totally addictive. I quick cut them up, and sliced a sliver here and there to nibble, and here and there again. Then I froze them so I wouldn't be tempted. I doubt I would have ever gone through the graham cracker step and the bar recipe as written were it not for the Daring Baker's. I am so glad I did, they are such an interesting treat, but you must eat them cold for the full effect! It is, after all, what these challenges are all about. So, get in there....and bake!

Directions:
1. For bottom Layer: Melt unsalted butter, sugar and cocoa in top of a double boiler. Add egg and stir to cook and thicken. Remove from heat. Stir in crumbs, nuts and coconut. Press firmly into an ungreased 8 by 8 inch pan.
2. For Middle Layer: Cream butter, cream, custard powder, and icing sugar together well. Beat until light in colour. Spread over bottom layer.
3. For Top Layer: Melt chocolate and unsalted butter over low heat. Cool. Once cool, pour over middle layer and chill.
Posted by Susie at 6:02 AM