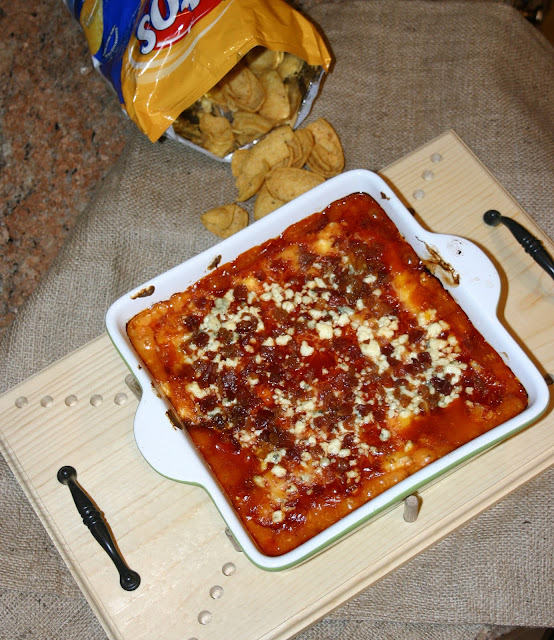 So summer comes along and everything slows down.  No Book Club, no Bunco, no tutoring.  Then Mr. Preppy announces that he is going to Poker Night.  Hang on a second!  We girls take the summer off, and the guys are still getting together.  What's wrong with this picture?  Not to mention we get home from Bunco at, like, 10pm. And a good hour later the husbands roll in.  We are not doing something right.  So this month the girls are getting together for a swim and dinner while the men play poker.  It goes something like this.  Both groups start at 7.  The guys all leave around 6:50.  The women roll in around 7:20.  The guys quit playing at 11.  Like they have to announce, no more cards.  We sometimes go a whole evening and never play a single round of Bunco.  If we do play, we never roll after 10.  Ha!  We need to let our hair down!

Every guy brings a dip. I really pondered for something different.  On Pinterest, my favorite place ever, I found a BBQ Chicken Dip make much like the Buffalo Dip.  So I headed over to the pinner's blog and saw how she made it.  I decided to take the idea and run, but with my own changes which I already incorporate into the original.

First change was thighs instead of breasts.  I love the dark meat, it is nearly impossible to overcook and dry out and has so much more flavor.  If you don't own a great knife or poultry shears, you have never really cleaned chicken thighs.  Next, since it's July, I hated to turn the oven on more than necessary.  So I cooked the chopped thigh stovetop in a high sided pan (not sloped like an omelet) in both butter and olive oil.  I added most of the sauce directly on the chicken after it was cooked.  She reminded me in her blog how much I love Bone Suckin' Sauce, and I bought the hot one for this.  Delicious!

The original recipe calls for Ranch Dressing.  Ew.  I have never been a fan of this stuff.  So I opt to add a half an envelope of dry Ranch seasoning to some sour cream and the cream cheese.  Way better.
I also layer my dip instead of mixing all together.  And then I decided to toss a little bacon and blue cheese on top.  Why not? 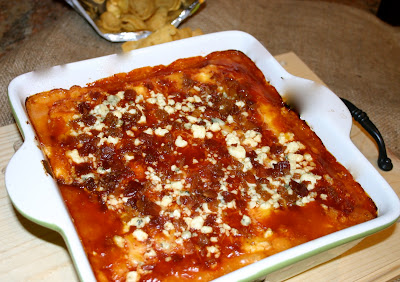 In a saucepan, saute onions in 1T olive oil.  When softened, add the brown sugar and  stir until melted and carmelized.  Remove onions from pan and set aside.  In the same pan add the other Tablespoon olive oil and the butter.  Melt and sute chicken thighs over medium heat until cooked through.  Remove from heat.  Add the onions and at least half of the jar of sauce.  In another bowl, mix the softened cream cheese, the sour cream and the Ranch dressing until well combined.

In an 8X8 baking dish begin layering.  The chicken and onion BBQ sauce mixture goes on the bottom.  Carefully cover with the cream cheese mixture, and top with shredded cheese.  Drizzle the last bit of BBQ sauce over the top and dress with blue cheese crumbles and bacon.  Bake at 350 for about 20 minutes.  The top should be melted and sauce should be bubbling up the sides.  Serve with Fritos Scoops and cold beer!

Stop back and see the terrific BLT Salad I made for girls night!  What are you waiting for?