Giada.  What can I say.  She is one of the smallest Italian women, ever.  I have seen her appearances on the various morning shows, and her cookbooks have been a staple at the store since she started writing them.  I own a few myself.  I like her approach to food, family and her books are pretty straight forward, even a little basic.  She seems like an instinctive cook (which I am; open the vegetable drawer and invent dinner), and her books are written in a way you can change ingredients and understand how things go together.


This week was my last cooking class of the year, as Thanksgiving looms!  It was a cookbook club class featuring Giada's newest book: Giada's Feel Good Food.  A cookbook, yes, but also a lifestyle book to answer the question she is most often asked: How does a chef (she went to the Cordon Bleu) stay so darn thin!?  It isn't a diet book, no fear, but rather a book full of healthy recipes (nothing artificial), gorgeous pictures and plenty of great information.  It was really one of my favorite classes, likely because it was topped off by Pumpkin Spice Cookies.  I loved them!  I decided to make them at home with a few changes, but lets break them down first.

The original recipe calls for all purpose flour which we used in class and was fine.  I made my home version with Spelt Flour and it was seamless.

The recipe also calls for Raw Sugar.  We used a Demerara Sugar when we made them in class, and I opted for Light Brown Sugar at home, both produced fine results.

The recipe also calls for Raisins, and well, I opted for chocolate chips.  Yes, really.  I love pumpkin and chocolate, and I decided this was going to be my one pumpkin baked good this season, so I went for it.  And the results were just delicious!

And here's where my "aha" moment came.  Prior to class, one of the managers does the grocery shopping for class.  He goes through the scullery for ingredients and lays them all out for me, and there on my cart was a bag of whole allspice.  The recipe of course, calls for ground.  So as I was prepping, I got out the mortar and pestle and ground it up.  Wow!  The aroma was intoxicating, almost overwhelming.  And that came through in the baked cookie in the most delicious, fall-flavored way!  I have been a big fan of fresh nutmeg, fresh ginger, even fresh ground cinnamon, but this was a first.  I immediately went out and bought whole allspice and will never have it anyway but fresh ground again!

Here's the recipe as written, and my substitutions.

Mix the flour through the all spice in one bowl.  Use a whisk to make sure there are no clumps.  In another bowl, mix the rest of the ingredients except raisins, and again whisk to make sure your sugar isn't clumping.  Finally mix the bowls into one, and stir it up well.  Add your chocolate chips or raisins (or both!).  Drop onto parchment covered baking sheets, and bake about 15-18 minutes at 350˚.  Cool thoroughly before packing into airtight containers. Makes about 30 cookies. 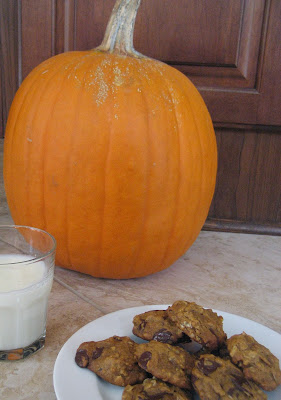 If you have been around awhile, you may have read a similar recipe for Pumpkin Cookies and a nostalgic little story.  Don't tell Betty, but Giada's cookies are tastier! It must be the fresh allspice!  What are you waiting for?  Get in there and bake!


Have you missed the previous chefs?  50 Chefs for 50 Years:
#1 Mom, and Steak In A Bag and Ambrosia Pie
#2 Chuck Williams (founder of Williams Sonoma) and Cheese Souffle and Chuck's Zucchini
#3 Dinah Shore, and Corn Crab Cakes with Jalepeño Tartar Sauce
#4 Deborah Madison, and Summer Squash Tatines
#5 & 6 Eli and Max Sussman, and The Best Fall Dinner EVER!
#6 Ina the Barefoot Contessa and Chopped Cape Cod Salad
#7 & 8, Julee Russo and Sheila Lukins, The Silver Palate and Chicken Puttanesca
#9 Paul Prudhomme and Mirliton Pirogues Stuffed With Andouille and Shrimp