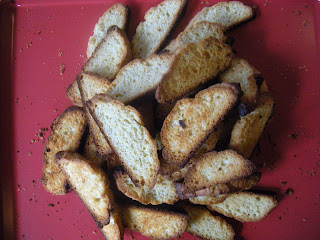 Aunt Molly was tall, that I remember. We went to her home on a few occasions, but she visited us only once to my recollection, but what a visit. She prowled around our woods one afternoon and brought in these leafy plants, they resembled a rhubarb, but weren't red. I know now they are in the thistle family, and called cardoons. She stripped the leaves and trimmed the woody stems, sort of like you would trim celery, peeling the stringy outsides off. Then she cut them into 4" pieces and dipped them in egg, then flour and fried them. They were wonderful. I don't think I ever had them again. I tried unsuccessfully to plant thistle here in Memphis, but to no avail. Cardoons are just a memory.
However, on that same visit, Aunt Molly baked cookies. I didn't watch her do this, but remember the sweet crunch of these cookies. They were unlike anything I had ever eaten. They were a little complicated for me as a 12 year old, but my mom would make them pretty often, and we fondly called them Aunt Molly Cookies. Many years later when I was a student in Boulder, I walked into this small shop and there was a huge jar on the counter filled with Aunt Molly Cookies. I couldn't believe it. They called them Biscotti, I had never heard them referred to as that. So I shelled out $2 for nothing but disappointment. When my weekly phone call home rolled around I told my mom about them, what they were called and how awful they were.
So here we are many years later, and I am baking Aunt Molly Cookies. The aged recipe is written in her handwriting which is as tall and perfect as she was. I do it a few times a year, and this time I decided to try a few changes. The original recipe follows, with my little changes. I tried both batches with the addition of rice flour. King Arthur has a biscotti cookie mix that Lori sent me and it is so good, I tried to figure out how to make them ourselves. The only odd ingredient was rice flour and I assumed it was to make the crumb a little more delicate and crunchy. I like the taste of Aunt Molly's, but I had a hard time getting that crunch. I also used the grocery brand of Anise extract and used a half teaspoon. It wasn't enough for that pronounced flavor I love. The traditional needed a full teaspoon on anise extract.
I have in the past used Pure Anise Oil, in which case a little dab will do ya. It is way too potent, and one drop too much is like mouthwash. I have seen recipes that use Sambucca for that anise flavor, but I think the extract works well.
The second batch I made I substituted the white sugar and added brown sugar. There is a cookie called Biscoff, if you fly Delta you know what I'm talking about. I decided brown sugar is what gives those little jewels their crunch and flavor, so I skipped the anise and added vanilla. Both results were delicious. The biscotti made with only brown sugar looked no different than the originals, but perhaps a little sweeter.
I have slowly started replacing my insulated cookie sheets that I have used for 12 years. The traditional sheets I bought cook much faster and the bottoms get brown very quickly on lower racks. So I have a little relearning to do. I think I would like the first baking on the insulated sheet, and the second baking on the traditional sheets so they brown nicely. This same recipe runs on Epicurious.com, but has twice the amount of butter which would make them more of a cookie designed for the American palate.
Aunt Molly Cookies
1/4 lb. butter
3/4 cup sugar (brown sugar tastes great too)
4 eggs
1 1/2 c. white flour
3/4 c. rice flour (you may use all white flour)
3 teaspoons baking powder
1 teaspoon anise extract (use vanilla for a more subtle cookie)
1/4 teaspoon salt
Cream butter, add sugar and then eggs. Add sifted dry ingredients. 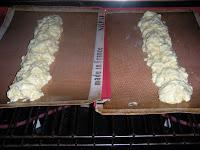 Roll dough into 2 long logs and bake at 370 until light brown. About 20-25 minutes. Allow to cool on rack about 10 minutes and then slice into 1/4" slices on the diagonal and bake about 5 minutes on each side to crisp them.
Posted by Susie at 11:06 AM