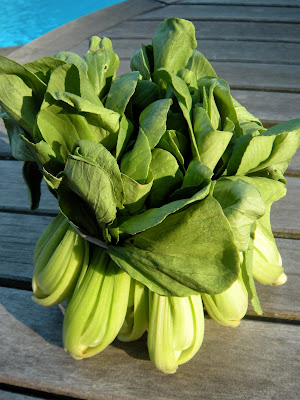 One of my favorite things about summer is the Farmer's Market. Memphis has a fabulous one downtown every Saturday. The assortment of things offered is staggering (so are some of the prices to be honest). For the last 15 years I have been patronizing the Shelby Farms Farmer's Market at the Agricenter which I love and is so charming in the big red barn. On the weekends there are more vendors and a good variety and great prices to boot. Well, Germantown has declared its own market on Saturday mornings in the parking lot of Germantown Hardware. With only 5-6 booths, you can't really buy dinner here, yet, but I did find this gorgeous baby bok choy.
The Asian farmer explained to me it was best stir fried with the meat and seasoned with whatever I seasoned the meat with. Hmm. I get into this no oven or stove mode in the heat, and decided to do a little Googling. I found this blog on baby bok choy Grilling was very appealing. I decided to shortcut his steps and for the most part it worked about beautifully. Except of course the near death choking experience. More on that later.
I soaked the bok choy as recommended, about 10 minutes in cool water, which was good as it had wilted a little in the fridge. Soaking also helped rinse out the sand and grit embedded in the stalks. My baby bok was much smaller than the other blogger's, so cutting in half didn't seem like a great idea. I decided to grill them whole. And since mine were smaller, I decided to not trim off the leaves which that blogger did and stir fried. I left them damp as I felt that help steam them a little on the grill, and I tossed them in olive oil and sea salt. I put them on a hot grill and closed the lid. 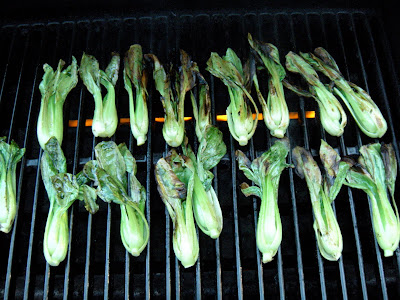 After about 5 minutes, I turned them over, the smell was fantastic. The outer leaves were charred but the bodies were browning nicely. After a few minutes more, I removed them from the frill and drizzled the whole platter with balsamic vinegar. They were beautiful.
As usual, I went first, with Scott and Christina watching my every move. I took a bite off the top (no knives or civilized utensils here) and it was a little stringier and tougher than I was prepared for even though it was well charred at the top. So my little bite got a little bigger, and before I could really take it in and chew it, I started to choke. Now I'm not sure how my family would react in any other emergency, but I was at death's door and they couldn't stop laughing. Needless to say, I saved myself. After that, the platter of grilled baby bok choy was just for me, no takers. Strange huh? Oh well. Next time, trim the leaves, but leave the hearts whole. The heart of them is crunchy and delicious. 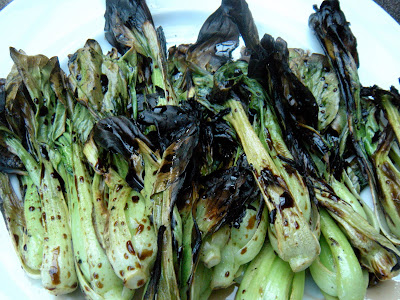