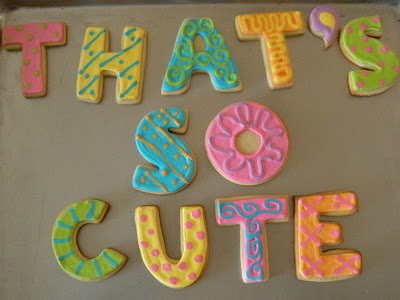 Is there anything as cool as your "tweet of fame"? It used to be your 15 minutes was the pinnacle, but now if you can get a tweet by someone with a posse of followers, well, that just rocks! So, who you ask? Iliza Shlesinger, winner of The Last Comic Standing is the host of a pilot called That's So Cute. I was asked to bake some Sweetie Petitti cookies for the shoot and it turns out that not only is Iliza funny, she has great taste in cookies and she dropped a Twit Pic.

I sent out 3 sets of the show name to my sister Lori and was told they had been put in the freezer....Panic! In the south when anything comes from the freezer it weeps in the humidity so I was afraid of the quality of the cookies when they thawed. So Lori decided she needed to test them and took out "SO" , thawed them and ate them in the name of culinary investigation and they survived. So what to do with "THAT'S CUTE" that was left over? She decided to substitute them for a friend's birthday cake, why not? 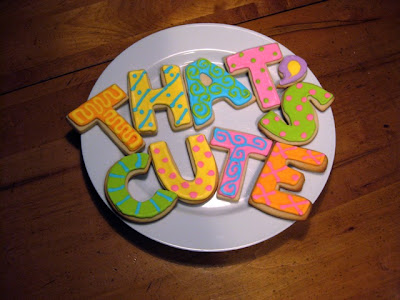 That left a couple sets for the pilot which apparently was very successful. Look for it soon on a network near you! And good luck Iliza, nice tweeting with ya!
Posted by Susie at 7:26 PM