Nuttier Than a Fruitcake! 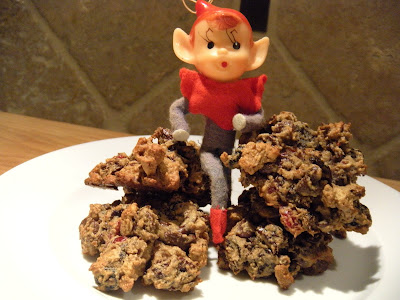 Few things can stir up a controversy faster than that word. As a kid I remember fruitcake appearing right around Thanksgiving. I thought it was disgusting. The colorful cherries, the mere weight of that small cake, and the lack of, well, cake. Over the years I have had many fruitcake experiences, and they just keep getting better.

When I first started my "little part-time" job 14 Christmases ago, we sold Assumption Abbey Fruitcake. I knew it had to be good, it's made by monks, and the webpage shows them injecting alcohol into the cakes. (Could it be Christian Brother's Brandy? I mean, let's keep this in the family right?) The first time I tasted it, I was so pleasantly surprised. It was dark, and nutty, and mildly fruity. The problem is, if you are like me and live among non fruitcake eaters, it can take a year to get through a 2 pound cake.

Last January, I was in Florida visiting the parents, and my dad opens a tin from the fridge and unwraps a little chunk of fruitcake. Hey, what is that amazing aroma? It just so happens that my sister in Iowa sends him a fruitcake every fall. It's actually 3 small loaves and he soaks one in whiskey, one in rum and one in amaretto. Then, he wraps them in old white t-shirt scraps that are soaked in the liquor, (he's 81, give him a little slack on this one, why buy cheesecloth when you have a drawer full of perfectly good, worn, white t-shirts? I personally suggest avoiding the armpits of the shirt). He gives the chunks a little nip now and then, and shaves a thin slice or 2, or 3 for breakfast every day. It is delicious. He would have made a great frontiersman (or pirate) with this innate ability to preserve food with alcohol, plus he's a great shot!

But still, my personal fruitcake dilemma lives on. I have shopped the nicer grocers, but honestly, the fruitcakes are huge. I want a taste or two, not a two month supply. Then my friend Melinda was talking about her friends bugging her to make her fruitcake cookies. Whaaaat? Two things I love wrapped up together! So here we go. Here is the recipe as she gave it to me.

Mix all ingredients. Drop by teaspoonful on greased cookie sheet. Bake at 350° for 10 minutes.

So before I even go on how I made them, let me say this. For a foodie like me, nothing means more than a handwritten recipe. I love this. There is something about that little card that says "Enjoy, Melinda" that I will always cherish. It is a symbol of a friendship, the sharing of a recipe, the note of good tidings. It will find a home in my Christmas file and for years to come I will remember my friend at Williams Sonoma. Okay, I digress. Back to the cookies.

My apologies to Melinda, I never follow a recipe. So, I used Bourbon not Whiskey. I could not bring myself to buy the candied cherries. The ingredient list was long and full of syllables, and they are very colorful. So I substituted ½ lb. of dried cherries and a bag of semi sweet chocolate chips. I thought chocolate would convince the non fruitcake eaters to taste them. I used Monukka raisins, they were dark and smaller than many of the other varieties, and soaked them in the Bourbon for about an hour. I also added ½ teaspoon of salt, I just thought there was a lot of sweet and it was going to need balance, especially since I used unsalted butter. I searched the web, avoiding the crazy million recipe sites and really couldn't find a recipe like this one.

They are dark and not really cookie-like. My 17 yr old who insisted on the chocolate but hates raisins and fruitcake ate 2 right out of the oven. They are delicious. I am going to chill the dough before I bake the last of them, in hopes they will hold more of a shape. Then I will freeze the baked cookies, and plan on sending some to dear old Dad. These are a keeper.

So, what are ya waiting for? Put on the Christmas music and get in there and bake!
Posted by Susie at 7:21 AM