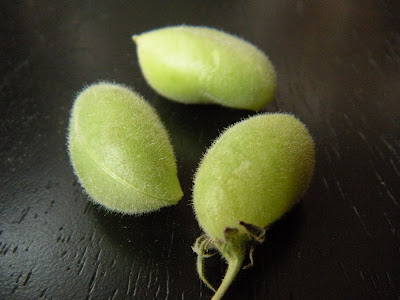 There is something about an imminent snowfall in the South. The really big and sure ones get hyped up for days, it is all anyone talks about. That's what it was like this week. Even though we had a quick, fluffy snow on Monday, the Wednesday Snow was all the buzz. So on Wednesday morning Nic had an errand to run in a part of town I don't get to often, so I had him take me to the Winchester Farmer's Market before the snow hit. This is a jewel in Memphis, but it needs heat. Thankfully I was dressed appropriately, I mean after all, the snowfall of the year was on its way! So while people packed the chain stores getting chili fixings and milk, I relished in the aroma and sights of the biggest International market in Memphis.

The Market isn't open air, it is in an old grocery store, but it is sprawling and downright cold when its in the 20's outside. It is laid out like a traditional store, but there is very little traditional food (in our terms) here. The produce department is the best in town. Period. They carry the basics, but instead of 3 kinds of pears, they have 8, 6 kinds of oranges, 3 kinds of bananas (regular, baby sweets and plantains), apples, limes (cheap, cheap, cheap) and then the veggies. The greens are fresh and line an entire wall. At the supermarket they are crammed in on top of each other, here they breathe, and are separated so if you grab collards, you're going to get collards. They sell 4 kinds of sweet potatoes, at least 15 kinds of peppers (did I mention how cheap it all is?) and even aloe leaves and cactus leaves. This is a market for people who still eat the food of their ancestors. The signs give you country of origin, and most was domestic, which is interesting. The strawberries (tasteless, hard little buggers) at the chain market were from Mexico, here they are from Florida and are deep red and juicy. I was amazed how much of the unusual items were grown in the U.S. In the produce department I could not resist fresh garbanzo beans. But we'll get back to those. 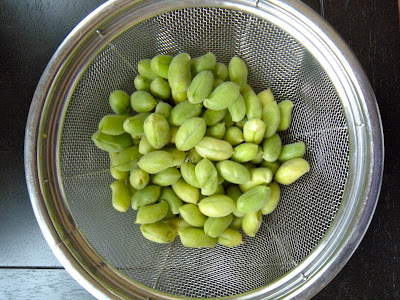 After produce, the back of the store is all fish and meat. Tanks with fish swimming about, eels and catfish, and a case full of dozens of kinds of fish and shellfish. They have fish mongers who can cut the fish on the spot. Fillets? No problem. gutted and whole? Okay. Whatever you want. Then the meat. They have real butchers. They pack, grind and wrap apparently right there. Chicken feet or cow tongues, ox lips and hooves, all for sale. This is a market that knows its customer base. There are no bins of orange tagged mark down meats, at least not on this day, and the cases are full and everything is fresh and clean.

And the store goes on. The grocery aisles are organized by countries. I think. I can't read a lot of the labels, but you start with the Mexican and Central American groceries. Beans, flours, hot sauces, canned veggies, spices, even candy and cookies. Then comes the Asian aisles. Japanese, Chinese, Taiwanese, Korean, those I know for sure. Sauces, oils, rice (OMG the rice selection!), teas and again candy and cookies. It is so fun to shop and guess what lies in the colorful and sometimes quite funny packages.

Then we have frozen food, drinks, and misc. end caps with crazy stuff. The Chinese New Year stuff was 25% off. Colorful trays with candy (I think) and bright red pigs, although I thought it was the year of the rabbit. There is so much I do not know. But I do know they are missing a bakery. At one time they sold some fresh baked items up front, but it wasn't a real bakery, and I suspect the health department wanted that stuff made on the premises or made from a "real" business. Wouldn't it be wonderful to get authentic sweets on the Day of the Dead? Or fresh Vietnamese buns that I hear so much about? Maybe someday in the future.

So what did I spend $60 on? Lots of produce. Limes, sweet potatoes, tomatoes, peppers, onions, greens, and of course those fresh garbanzos. Some tilapia fillets and spicy Mexican cheese. Fish sauce, hot chili sauce, popcorn, rice vinegar, and some beans. I also bought a bag of pot stickers and spring rolls, because I am guessing they are a little more authentic than the ones at Costco that my kids love. This is not a run in and grab a few things kind of store. This is the store where you have your phone with apps ready and I carry the Food Lover's Companion. It is after all, a learning experience. 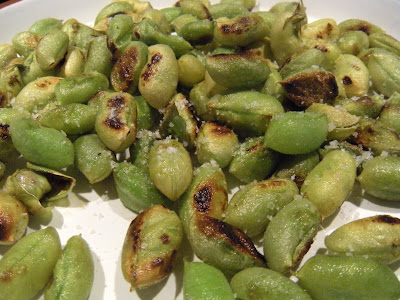 So fresh garbanzo beans. They were about $3.99 a pound, but they are so light, I didn't get anywhere near a pound. They are encased in these fuzzy little pods and were a fresh spring green color. I jumped on the Internet when I got home and read the blogs, the food sites and decided there was no reason to go overboard here. I rinsed them and sauteed them in a fry pan in olive oil. Sizzling hot. They have to get good and browned because even though you don't eat the pods (think edamame) you want that charred flavor as you rip out the bean from the very fibrous pod. Don't forget the Fleur de Sel. They were delicious. Nic declared if he owned a restaurant he would serve these to everyone, I agree. They were particularly enjoyable with the snow coming down and the city at a grinding halt. A snow day and another memory made. 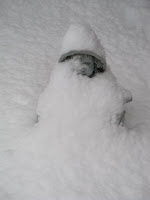