Not Goodbye, But See Ya Later! 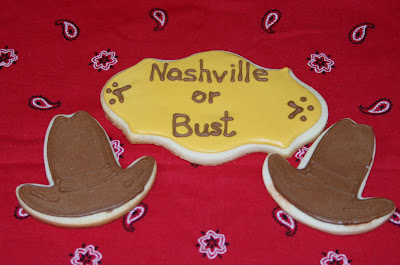 So tonight is the going away party for a friend I made back when my daughter transferred in the 4th grade. We were instant friends. For many reasons. First off, everyone thinks we're sisters, which we think is hilarious. It's because we both have very dark brown eyes and amazingly fine hair, and I don't mean fine, like really great, I mean fine, like feathers. She is also one of the most brutally honest people I know, shoot from the hip comedienne and would do anything you needed. We became friends through volleyball. Her daughter is tall, like her, and plays front row, mine is short, like me, and plays back row. We have traveled to many a venue, ragged on about terrible coaching, and stayed up late having many cocktails. This is us in the French Quarter after a day of watching volleyball. Our beautiful daughters will cringe at this 5th grade shot! 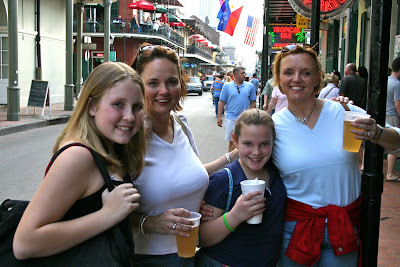 Trust me when I say they outgrew the awkward stage nicely. This is the girls at graduation on either end of the group! 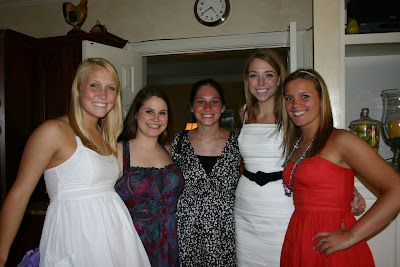 One of our craziest memories is the White Trash party we and a few other couples (all having had a temporary brain lapse) put in an auction. The bidding went WAAAY up and we threw a party at my house no one is likely to forget. We didn't miss a detail from our clothes to the decor to the food. Trust me when I say you never want to host this party. People fall into character and forget where they are. And let's just say this party alone will keep me out of any political race. PC is wasn't.

She is moving to Nashville next week. (Yes, we are also moving to Nashville, please do not ask me when.) She has more urgency than I to get settled. She has one headed off to college, but she has another who will be a sophomore in a new high school. And her husband has been working full weeks in Nashville for a few months now. I have no sense of urgency. I want to relax this summer and enjoy my kids last summer together. When they head off to school in August, I'll put the sign out. It'll be a lot easier to keep clean. 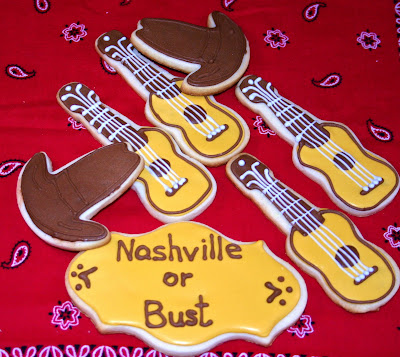 When I got the evite for the partyI knew I would have to whip up some cookie goodness. I have brought her rejects over the years, and tonight she gets her very own! I bought the guitar cookie cutter thinking of my son the musician, but decided what a perfect cutter for a family moving to Nashville, home of country music. (Yes, I know a guitar has 6 strings and these look like a ukelele, but I could not fit 6 strings...) I searched the web and found some cute ideas, I liked the "Nashville or Bust" idea, and I saw a lot that said "We'll miss you". 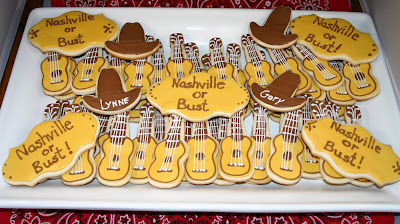 But I won't miss her, since we are moving to Nashville sometime soon. So between house hunting and actually getting there, I won't have time to miss her. We will pick up where we left off here in Germantown. And how lucky we both are to move to a new city with old friends!
Posted by Susie at 4:41 PM