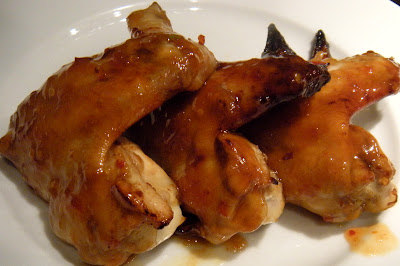 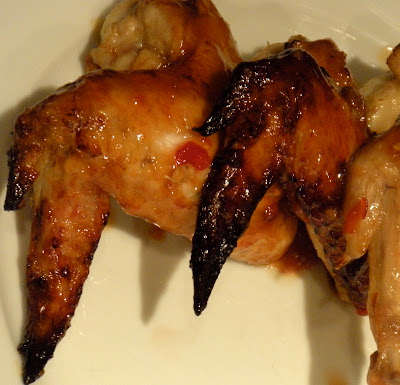 It's time for the Secret Recipe Club once again.  Bloggers like myself are assigned another blog to stalk, er, read, and we choose any recipe to make and blog about it.  It opens up the amazing food blogosphere and I have found some very talented cooks along the way!  I have made some delicious Salmon Patties, an incredibly enormous and delicious Cookie,  and some amazing Short Ribs. This month I discovered a talented, and young cook named Peggy, and her blog, My Fiancé Likes It So It Must Be Good.

I love chicken wings.  I love them grilled, baked, smoked and fried, as long as someone else fried them.  But I never deviate from my classic buffalo/bbq sauce.  We toss the sauce together basically cleaning out the fridge each time.  But it always has Frank's Hot Sauce, a little BBQ sauce (Rendezvous is my fave) usually a little ketchup to temper the heat, and some brown sugar to get it to glaze when basting. I have cut out other wing recipes, and just never got around to trying them.  So as I search a most interesting blog, My Fiancé Likes It, So It Must Be Good, I found a very tasty-looking wing recipe, with an Asian flair.  Now this was no easy choice.  There was so many terrific things, the photographs are fantastic, and there was some great Korean BBQ recipes that I would love to try.  But the Superbowl is approaching and Sweet Chili Chicken Wings it is!

She keeps her wings intact, which is a great idea, because me and poultry shears and a cleaver always puts me in a bad mood.  I hate cleaning animals.  I dream of being a vegetarian at times like those.  Besides, they look great cooked whole.  Reminds me of BB Kings wings, which at one time were fantabulous.  Haven't eaten there in many years.  But I digress.  This recipe is crazy easy.  She marinades and bakes them in that, and then glazes with the sweet chili sauce when they come out of the oven.  Everyone knows that stuff would burn to oblivion in the oven, but I decided to brush a little on at the end just to see.

I did notice that there is a LOT of sweet chili sauce available these days.  So I decided to try it 2 ways.  I made the marinade and sauce per her recipe.  My wings marinated for about 6 hours.  I baked them as she directed with a little marinade brushed on them for more flavor.  During the last minutes of baking, I brushed half with the Thai Chili sauce per her recipe, and the other batch I decided to try with Frank's Sweet Chili sauce I found on close out at an old grocery store.  I am a Frank's fan, and have never seen this sauce, I knew I wouldn't be disappointed!  But, I sort of was. 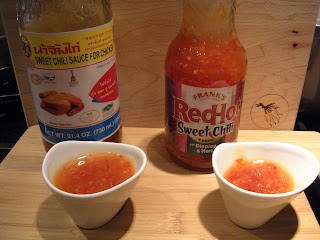 In a side by side comparison, the ingredients are virtually identical.  Acetic acid is used to regulate the acidity in both, but the Thai bottle had other chemical compounds in it.  Franks did not.  Doing the old finger test, I was delighted with the bite of the Thai sauce and disappointed with the lack of heat in Franks.  As it turns out, Franks could have used the addition of Sriracha and the Thai would be fine on its own.  The Thai was also a little less thick, but amazingly, neither had corn syrup.  But I really try in the Secret Recipe Club to follow the blogger's recipe.  And I am glad I did.  My hubby really liked the Franks as he is not a heat fan.  And I was amazed, really at what happened to the Sriracha in the chili sauce.  It was fantastic.  Like an afterburner effect, and it was delicious!  Oh yea, you will need lots of napkins!

In a large bowl (big enough to fit all those wings) combine vegetable oil, rice vinegar, 1-tablespoon soy sauce, garlic, ginger and pepper flakes. Toss the wings in the marinade and set in fridge for at least an hour. The longer the better in my book, and make sure you stir them about every so often. Next time I will use a shallow sealed container and just flip them around. 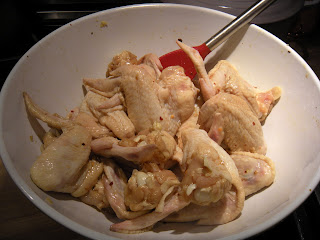 In a small bowl, combine the remaining 1-tablespoon soy sauce, sriracha, and sweet chili sauce. Toss the wings in the sauce and serve!

Preheat oven to 450 F, Pure Convection.  In Peggy's original recipe she said she would fry them next time to get them really crispy.  I decided to bake them on Pure Convection, a great setting on my oven that I thought would really get meat crispy.  Unfortunately it didn't, and I am still hoping for a way to oven fry and get crispy skin! 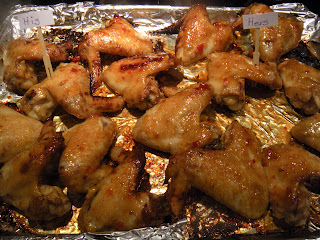 Line a baking sheet with aluminum foil and bake the wings for about 30-45 minutes (or until chicken is done all throughout and skin is darkened, flipping after 15 minutes or so. I basted them with the original marinade for the first half, and then at the very end with the chili sauce to get it really cooking.  Do not let it burn!