Oatmeal Pancake For One 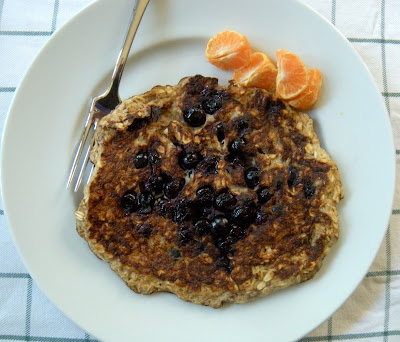 There are a jillion posts about overnight oatmeal out there.  I tried one I found on Pinterest, but it was 9 ponts on WW and it was really hard to swallow, gloopy is an accurate description.  Then my friend Lisa made one that looks way better here, and there is no Greek Yogurt, but there is peanut butter.  I haven't tried hers, but it sounds yummy.  But here I am, wanting oatmeal, but not wanting a bowl of oatmeal.  The truth is, there are a lot of points in it, and I need protein for breakfast because I eat right after my work out.  So I thought I would share my Oatmeal Pancake For One! 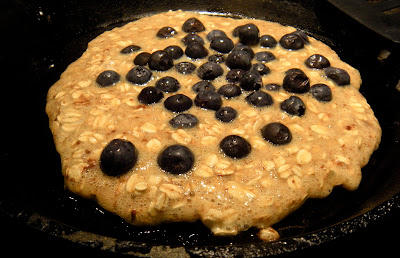 After breakfast, well, actually after lunch, when I woke up the princess, she said, "I thought I smelled pancakes, then I remembered only Mom was home, so, not likely!"  Well, wasn't she surprised when I made her one!  She has one a few times a week now! 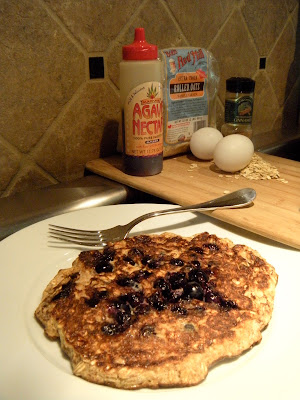 Although I grew up close to a Quaker Oats plant, I have forsaken it for Bob's thick cut oatmeal.  I love the chew of this oatmeal.  A traditional bowl requires a little more cooking than Quaker, but for making this pancake it is quick and perfect.  I do still buy Quaker Old Fashion for my cookies though.  I also needed a protein source, so eggs are easy, cheap and low fat.  I use a whole and a white, that way, Sookie-the-one-eyed-Bichon gets a healthy little yolk for breakfast!  (See her cute little face on this post!)  I chose to sweeten with Agave Nectar, but you could use sugar, honey, stevia, whatever.  I also had some leftover buttermilk and added a dash. 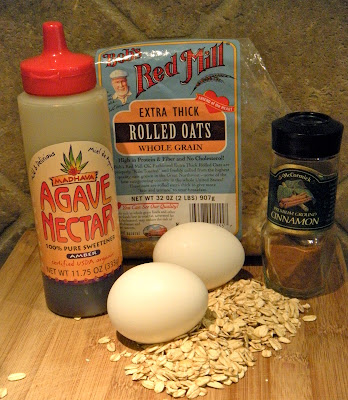 Oatmeal Pancake For One
7 Points Plus on Weight Watchers

Beat the eggs with a fork and get them foamy, add the oats, cinnamon, nectar, and milk and mix well.  Pour into a hot omelet pan and as the edges set, but it is still gooey, sprinkle on your fruit.  Carefully flip when the top begins to set, and cook until browned.  Depending on the spread, I find the best way to get it out of the pan is to lay your plate over the top, and carefully, flip!
So, what are you waiting for!  Get in there and cook!