It's that time again!  Secret Recipe Club, and this month I was lucky to get the blog, The Slow Roasted Italian.  We are both second generation Italians, are at home in the kitchen and love to entertain.  Donna would be my perfect neighbor!  Browsing her blog was a joy, and when I stumbled on Cannoli Ice Cream, I knew I needn't go any further.  Memorial Day was the perfect opportunity to make something cool and delicious as the temps soared to 100 degrees.  This was amazing!  It is a simple recipe with basically ricotta and milk.  The special surprise is the Nutella/chocolate that you spread inside the cones, around the cone bowls, on your face, off your fingers...you get the idea.  It's good!

I decided to make home made cones too, with a recipe I found on Martha, I thought it might be a good excuse to get the pizzelle iron out.

I thought about making a cannoli cone, as I have made cannolis many times, but decided a lighter version was called for!  No fried cones!  But no matter what cones you use, don't forget the Nutella/chocolate goodness in the bottom!  My cones were a little loose, so I tucked a piece of a marshmallow in the bottom to hold the chocolate.  Don't be shy here! 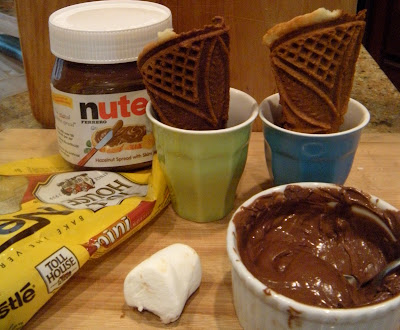 Whisk ricotta and milk in a large bowl until smooth.  Add the simple syrup and vanilla and stir in well.  Put the mixture into the frozen bowl of an electric ice cream maker (this is a great investment).  Freeze according to manufacturer's instructions.  Add chocolate chips at the end, I use a rubber spatula to mix them in.  Transfer to a clean bowl and freeze until ready to eat.  But let it soften a bit before scooping.

Simple Syrup- Combine 1/2 cup water and 1 cup sugar in a small saucepan.  Bring to a boil and simmer for 5 minutes until the sugar is dissolved.  Cool completely, and chill for best results.

Drop batter onto greased pizzelle iron and cook until desired doneness.  I don't have a cone mold, so I made cones by rolling and placing in a small cup, they were pretty tiny!  And I made bowls by slipping the hot pizzelle into a small bowl and letting it cool into the shape.

Melt in mico at 30 second intervals.  If the cone had a gaping hole at the bottom, I cut a small marshmallow piece to fill it in, then I brush the inside of cones with this mixture and a blob of goodness at the bottom and pop in fridge to firm up. I did the same for the bowls, and some I did the edges with some sprinkles.  Either way, the Nutella chocolate thing is delicious, and I made extra.  Scoop the ice cream in and serve!  That frozen blob at the end of a cone after the ice cream....delicious!  The cones and the ice cream were totally amazing!  Buon Appetito!  So, what are you waiting for?  Get in there and cook!