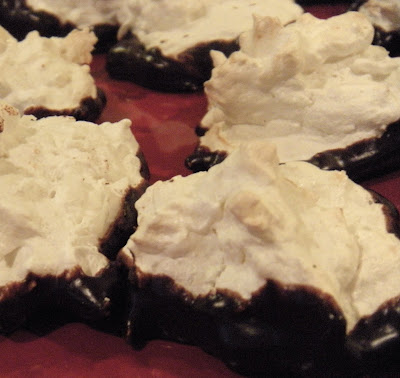 Just over a year ago I blogged French Macaroons and they were okay. I dream of eating a beautiful pink one in a French cafe overlooking the Eiffel Tower one day, I feel most certain I would love them. Then one day before Christmas I was helping a friend bag cookies for a bake sale, and she reported back that her Coconut Macaroons were the first to go. So after a little hunting, I found a recipe that combines the airiness of a French Macaroon and the coconut of a traditional, denser macaroon, and these cookies are the product of that little marriage.

The book is called the art of the cookie by Shelly Kaldunski, and it was a Christmas present. It wasn't the baking book I originally had my eye on, but like the hundreds of cookbooks I own, I curled up with it like a good novel and knew I would take away something wonderful. She calls them Chocolate Dipped Coconut Clouds, I call them delicious! Here's how it went down in my kitchen.

My first batch of egg whites had been compromised somehow...I could not get them to peak. The power went out at that time, so it was just one more hassle. Power restored and a fresh batch started. Now, I have the largest Kitchen Aid stand mixer you can buy for your house. It took much longer than her reported 3-4 minutes to get stiff peaks, even in this super low humidity (unusual for Memphis even in the winter). And I added vanilla paste vs. the extract. It leaves little vanilla bean flecks in the batter. And that batter...if you have read other posts, you know I have an unhealthy obsession with meringues, actually just the whipped whites and sugar. I can say no to a baked meringue, but I can lick a bowl clean of raw, whipped egg whites. Yes, I know all about the terrible illnesses it could harbor. I am not scared.

I folded in the coconut and made my little clouds. I licked the beater, the spatula and well, you get the picture. It was mighty tasty! I baked in convection at 320°, and rotated in the middle of the time. They did seem to spread a little more than I thought they would, next time I will build them tall and narrow. And sadly, because I am an incessant multi-tasker, they baked about 5 minutes too long. They lost that bright white and got brown. Damn. That means no photos. Well, maybe a photo shopped photo, or perhaps black and white. This of course does mean there will be Macaroon Retry in the near future.

But here's the thing about people like me. I'm a tiny bit Obsessive Compulsive. The more I looked at those pathetic brown meringues, the madder I got at me. So I did what any other crazy baker would do. I made them again. In my haste, I breeched a yolk and no peaks were to be had. So again. I now have over a dozen egg yolks in my fridge, and a beautiful batch (albeit a little short on the coconut) of Clouds in the oven. Which, I might add, I am tending to very closely. I turned my convection down to °310 and they baked for 12 minutes. And, finally, we have a winner. But here's the thing. They never seem to cook through, and they aren't tall like the picture in the book. I'm thinking no convection would be best. But as I am out of eggs. I am done for the day with this project! One day we will do meringues until we can solve the mystery. The photos are not stellar, the taste, however, is delicious! 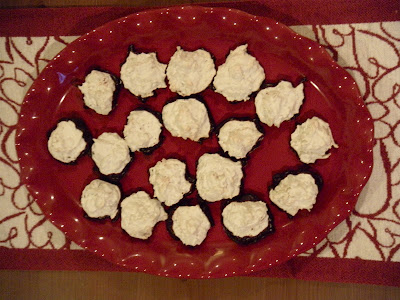 Preheat oven to 325° and line baking sheets with parchment sprayed with baking spray.

In a mixer, beat egg whites and cream of tartar. Beat until there is a dense foam, then add salt and gradually add sugar and beat to stiff peaks. Using a rubber spatula, gently fold in the coconut in 3 batches. Place rounded tablespoons of dough about an inch apart.

Bake until golden about 19-22 minutes. Let them completely cool on the sheets about 30 minutes. Dip each cookie intot he Chocolate Glaze and and return to parchment. Chill until set about 10 minutes.

Cookies can be stored in an airtight container for up to 4 days.

Bring cream and butter to a boil in a small saucepan. Remove from heat and add chocolate and salt, just stirring to cover. Let it sit for a minute to melt and then whisk until smooth. Let it sit at room temp, stirring occasionally until it thickens, about 30 minutes (it didn't take long in my chilly January kitchen!).

So, what are ya waiting for? Get in there and bake!
Posted by Susie at 7:07 AM