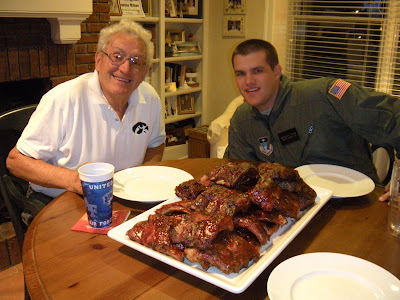 This post is about Barbecue, but first a little history lesson.
For those of you unfamiliar, the Mason Dixon was a line of demarcation set up in the late 1700's to divide the British Colonies during colonization. In the 1820's it became a border of the North and the South. The funny thing is people refer to it today, but I don't think anyone knows where it really is. I was thinking here, in the deep South, or maybe Atlanta area, but it actually divides Pennsylvania and Delaware from W. Virginia, Virginia and Maryland. Who knew? Thanks Wikipedia.

One of my Southern friends and I like to have Mason Dixon meals. She brings the deviled eggs, the cheese grits, pecan tassies, the typical Southern fare. I bring the eclectic dishes that have been morphed from the melting pot of industrialization. Ceasar salad, spanikopita, lasagna. But no where is that imaginary line more prevalent than in Barbecue. So here is my little list of differences. 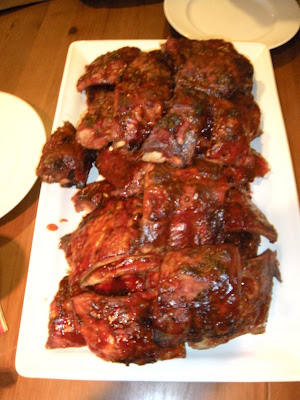 Beer Can Chicken on the Grill

SAUCE
North-Ketchup, mustard, relish
South-Barbecue sauce, vinegary in the Carolinas, sweet and smoky in the South, mesquite to the West.

CONDIMENT
North-lettuce, tomato, pickle
South-slaw, yep, the slaw goes on top of the meat on the bun for pulled pork

So, as you can see, my tongue in cheek list demonstrates the big difference. Semantics. Years ago, when I sent an invite to the baseball team for a " Barbecue", people were surprised when we grilled burgers and brats. And one of the first years in Memphis, my cousin and her husband (a Louisiana native) came to visit and we grilled ribs. Rookies. You don't grill ribs on a grill. You can, but trust me, after 20 years in the South and much experimenting, you smoke ribs. Slow, for 5 hours or so, with a little smoke, pecan, apple, hickory, whatever you like, and some home made sauce.

I've learned a lot living here. We still invite friends over to grill out. Steaks or chops on the grill. But we also invite friends for barbecue, ribs or brisket, smoked for hours and basted with sauce. Either way it's dinner and it's delicious. So, what are you waiting for? Fire it up!
Posted by Susie at 8:59 AM