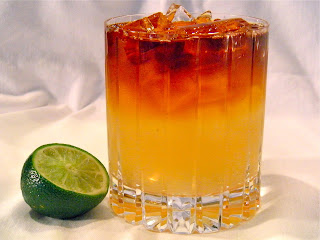 Life of Pi- This movie is gorgeous, a beautifully shot movie with some hilarious one liners in the beginning.  I wish I could remember them, all about religion and this Indian boy's quest to understand while being an Hindu/Catholic/Jew.  I think that's the combo.  The boat scene is too long for me.  I mean way to long, and the seas are stormy, so I decided I would like this movie best with a Dark and Stormy.  I have blogged this delicious creation before here, but here's the recipe and a peek.  Perfect with Pi.  A shot of vodka, a shot of Goslings Black Rum and ginger beer.  The photo is above. No, you cannot sub another rum or ginger ale.  Trust me.

Amour-I wish I had Absinthe.  I mean this movie is all about death.  It is awful.  Sorry.  I get the idea, the heart wrenching decisions, the one true love.  But it is not entertaining, and I like to be entertained.  So, how about a chocolate martini called a French Kiss.  If you follow me on Pinterest, which you should, you will see I pinned this martini to my Liquid Courage board.  Sadly, it is a dead link.  So, I looked at the picture and punted.  Here's how it went.  I made the Tootsie Roll found below.  I added another 1/3 ounce (or so) of Godiva, and a little half and half to make it creamy.  I topped it with fresh whipped cream and a kiss.  Which by the way, are kind of heavy and you have have to take a quick picture before they sink!  It's really rich and gave me a bit of a stomach ache.  Not my kind of cocktail. 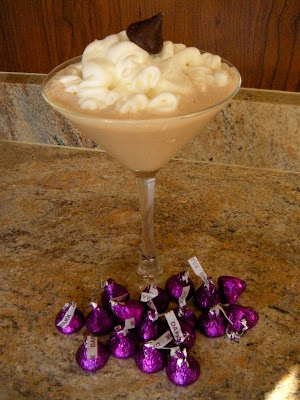 Beasts of the Southern Wild- I started to watch this movie and quit.  Then I decided to watch it again.  I'm glad I did as I enjoyed it.  I also enjoy Duck Dynasty and Swamp People, so I guess I have a soft spot for the Cajun wilds of Louisiana.  There was just one drink for this; Swamp Water.  That's the link to the original recipe, but I can't go there.  I am allergic to fruit flavored (most of them anyway) liquors.  So I decided it was all about the vessel and the color.  So I made a Jack and Ginger with a drop or 2 of food coloring for zing!  Swamp Water for a Yankee is what I'll call this delicious creation.  It is one of my standby drinks, but not usually green!  I had a handyman bring me some Moonshine once, and it reminded me of the home made liquor in Bosnia.  Not fit for consumption!  Ugh!

Django Unchained- One of the 2 nominees I haven't seen yet.  My brother in law filmed part of this movie, so I will see it.  He did his part in New Orleans, and the movie is supposed to be pretty violent, so I thought maybe a Cajun Bloody Mary.  Start with the rim of your glass, and swipe it with lime.  Dip the rim in Tony Chachere's seasoning.  (Heck, sprinkle Tony's on everything you cook!)  Then add the ice, vodka, and mixer.  I am in love with McClure's Bloody Mary Mix.  I am the only one in my family that likes it, it is very pickle juice based, so not for everyone.  It is also very spicy.  I adorned my glass with lime, an olive and my very own Dilly Beans.  I can a batch or 2 every summer.  The rubber band around the jar is my reminder that those are special jars with additional hot pepper in the jar beside the cayenne.  If your mix isn't spicy then only Tabasco or Crystal Hot Sauce will do.  You must keep it authentic!


Les Mis- My least favorite Broadway play of all time.  Go ahead, moan.  I remember when I saw it, there was SO much fuss.  It was a huge deal to get tickets.  I really did not enjoy it.  Yes, the music is beautiful.  This is the only other nominee I didn't watch.  I will, one day, when I have lots of time on my hand.  So I really had trouble deciding a cocktail since I missed the movie. So I phoned it in.  Have a glass of Chardonnay.  Much to the dismay of many friends, I don't really care for that either!

Lincoln-This movie was great.  I did feel like I learned a lot about the battles both in the government and on the fields of our nation.  As a Midwesterner living in the South, you really only hear one version of the story down here.  There were no members of my family living in either the Union or the Confederacy at this time, so I am very neutral.  Oh, I'm sorry, did you think this war was over?

For Lincoln, we needed a shooter, get it?  So I decided a Tootsie Roll, since they look like logs for Lincoln's log cabin.  See how this all works?  The recipe calls for chocolate vodka, but I only had vanilla vodka, so I added Godiva.  My recipe was 1/3 ounce of each, vanilla vodka, amaretto and Godiva, and then Hershey's chocolate syrup for good measure.  Didn't pull out a single filling!  Delicious! Best if you give it a chill.

Silver Linings Playbook- This is a great movie.  I was a little unsure about the first 20 minutes.  But I love a happy ending, I love dancing and I loved the cast in this film.  It was remarkable, entertaining and I saw it again just for good measure.  And it was just as good the second time around.  But what to drink?  Philadelphia doesn't have an official drink  Well they tried to invent one, but it's called the Philadelphia Flyer.  I think that's a hockey team so it wouldn't do in a movie about the Eagles.  And let me say Invincible, a movie in Philly, also about the Eagles is my all-time favorite.  It's all about the music to me, and that is the soundtrack of my youth.  I digress.  In the movie they watch football and eat "homemades".  I love this language, isn't that what we do?  The mom cooks things she knows her family loves, but only her version, and it brings everyone together.  So for "homemades" let's have a margarita.  I make them myself, they're sort of Eagle Green, and I can't post a can of beer, which I suspect is the drink of choice in Philly on game day!  My margarita is a glass rubbed with lime and dipped in kosher salt.  Fill it with ice.  Add a jigger of tequila, a jigger of Cointreau, a jigger of fresh squeezed lime and a little simple syrup.  I don't like it too sweet, so sometimes I add a little water to fill it up.  I use this cool citrus tool and just figure a lime per glass.  I also eyeball my jiggers, so who really knows.  But my family will tell you they rock.

Zero Dark Thirty- Yikes!  This movie will get your heart racing!  It is a little controversial with the torture scenes.  I think the acting is awesome.  I am delighted my son is no longer in the Air Force and I don't think I want to move to the Middle East any time soon.  These countries under Islamic law are usually dry.  That would be a problem for me.  I have no doubt that those men and women serving in the desert would choose an ice cold beer for their first alcoholic beverage.  I know I would.  And I have a new favorite beer.  Land Shark  Which is perfect because the movie features Seals....get it?!  I know it looks like a Corona, but it tastes so much better.  It's so refreshing.  A squeeze of lime is perfect.  Cut 2 limes; stuff one in the bottle and use the other to wipe on the top of the bottle before every swig.


Argo- Finally, my winner for Best Picture.  I saw it 8 times.  Then I bought it on DVD.  This is an awesome movie.  It is historical, the music is great, it has an amazing cast, great one liners and a happy ending.  I was in high school when this all transpired, and it made me miss the early 80's.  Again, we are in a country with no alcohol...but alas, they are holed up in the Canadian Ambassador's home.  My first choice was this Canadian Cocktail in the video which is Campari, rye and vermouth.  I love Campari, and usually have it on hand, but I am out.  So I thought I would see if I could find a small bottle at the liquor store.  However, my wallet was stolen, I have no credit cards yet, no debit cards, and I am in a cash world this weekend.  I couldn't bring myself to spend $35 on a bottle for a blogpost.  So I decided to make a Canadian Hillbilly.  It's pretty much straight liquor.  A shot of Canadian Club, a shot of Tennessee whiskey and ice.  If I were trapped in Iran in 1980, I'd drink straight liquor too.  The Canadian Cowgirl calls for the same but with a little Coke.  I can't lie, that's how I downed all this dark liquor.  It's a good thing this blog wasn't completed in a day because I am a little bleary eyed for sure!
And I love cherries in my dark liquor.  They're not called for, but I did it anyway!